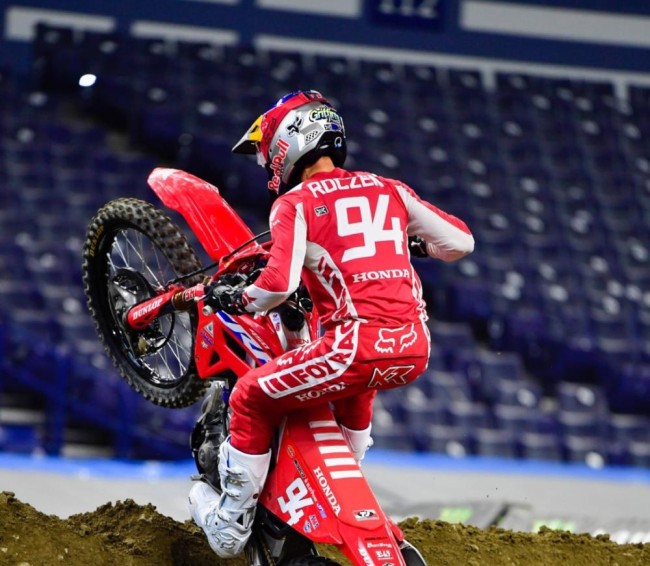 This time it wasn’t close. Ken Roczen totally dominated the second Indianapolis supercross of the week to win by ten seconds in the best ride since his 2017 injury. Unlike the opening round of the year, Roczen made quick work of holeshot man Barcia then steadily pulled away as Barcia held off a hard charge from Eli Tomac, who didn’t get the start he wanted.

It was the same story for Cooper Webb who just managed to get fourth with a last lap pass on a very impressive Aaron Plessinger, who took his best result of the year in fifth.

Roczen, who now has a 13 point lead over Webb, said: “I could ride my own, race that was really key, I had some really creative lines and just made it happen.”

Colt Nichols took the win in the 250 class in a wild night that saw title contender Jett Lawrence crash out of his heat race, race the LCQ but end up too sore to race the main with his injured shoulder.

However the main event wasn’t without drama as Michael Mosiman was leading and pulling away slightly from Nichols until a back marker got it wrong in the rhythm section and Mosiman got collected in the incident allowing Nichols into the lead! Mosiman lost his momentum from there and then lost second place to Craig but managed to take his second podium in row in third.

“I believe in my ability a lot,” said Nicholls. “I knew if I came in healthy I would have a good shot. I’m soaking it all in, I’m loving this moment.”