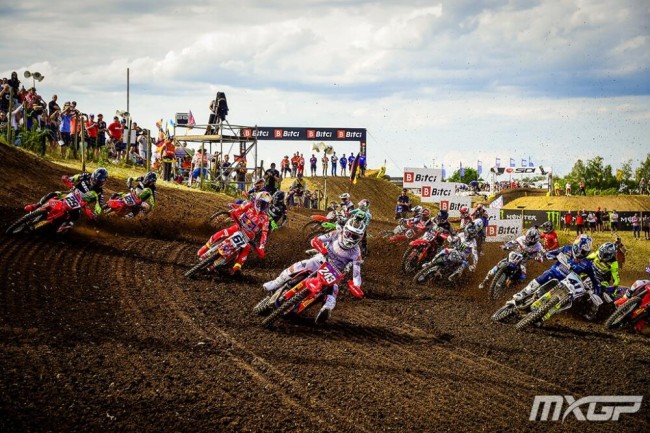 After three races off the podium, Tim Gajser was back on top at the German MXGP with an almost perfect weekend until Jeremy Seewer ended Gajser’s hopes of a 1-1 in the final moto!

Gajser won the qualifier and then ran away with race one looking supreme after a holeshot and pulling away from Pauls Jonass and the aforementioned Seewer. But in race two it was Seewer who took the holshot and, after getting around Prado quickly on lap one, Gajser tried to do the same with Seewer but the Swiss rider wasn’t having any of it. He fought hard to hold the lead in the opening couple of laps then gradually pulled away to a 7 second advantage out front, with Gajser admitting he settled for second on a sketchy track such was Seewer’s pace.

Seewer said it might have been his best race on a 450 and it’s hard to disagree, this was a straight up win against the in-form Tim Gajser on a track that until that moto, Gajser looked unbeatable on. But still, it was Gajser’s GP victory, his seventh of the year and his march to the title continues with a 100 point lead over Seewer and Prado in the series after Renaux couldn’t race due to factured vertabrae and fell back to fourth in the championship.

It was a tough day for Prado who crashed while fifth in race one sitting behind and impressive Febvre who was showing good speed all weekend on his return with a fine fifth overall. Prado would end up seventh in moto one but regrouped for a third and again a podium day, but admitted he just wasn’t feeling the flow on a track that wasn’t easy to navigate with it’s mix of hard pack and ruts all utimately flowing into one line in many areas – and plenty of opportunities for mistakes.

Things turned around in dramatic fashion in MX2 as Thibault Benistant took his first overall win of the year with an imperious race two moto win that saw him look a potential world champ of the future such was his speed, flow, style and line choice.

But the title drama was behind him. Vialle won race one holding off a determined Geerts right at the end after the Belgian spent the first half of the race finding a way by his teammate Benistant. Then in race two, with Benistant making an early pass for the lead, it was Vialle second with Geerts third, the top three all equi-distant apart to the tune of a couple of seconds. Then with Geerts still charging behind him, Vialle came to a surprising halt at the top of a hill and despite his efforts to restart the machine rolling down the drop-off, the KTM would not fire and a costly DNF resulted in Vialle losing the lead in the championship!

From there Geerts played it smart and didn’t go after Benistant, not wanting to risk a guareented 22 points to chase down his rapid teammate as Mikkel Haarup, fast all weekend, returned to the podium with third oveall and third in race two just ahead of Simon Laegenfelder who upped his pace dramatically in race two after a frustrating ninth in race one and stopped on the table top to acknowledge his raucious home support at the end of the race two.

Geerts now leads the championship by eight points as the the series heads to Indonesia with MX2 the centre of attention for the world championship battle in 2022.