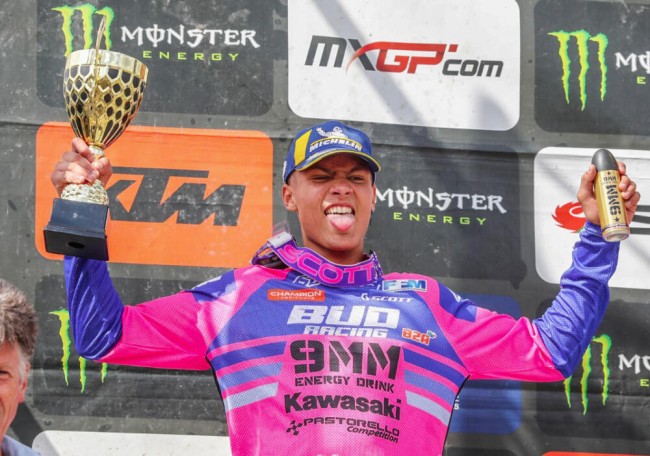 The teenager already laid the base for his eventual success with an impressive ride from a ninth-placed start to second at the finish of the first twenty-five-minute-plus-two-lap race on Saturday afternoon. He had advanced into the top four within six minutes and two more stunning passes saw him take over second by half-distance. The race-long leader, unhindered by traffic, was already thirteen seconds clear at that stage but the French youngster, setting the fastest lap of the race, had reduced the gap to less than six seconds by the time they received the chequered flag. Another ninth-placed start in race two on Sunday morning was rapidly converted to fifth on the opening lap. Emerging best from wheel-to-wheel tussles with each of the championship leaders, he took a firm grip on third in the closing stages to clinch second overall over the weekend and claim his maiden EMX250 trophy. With two rounds of the championship remaining he is now seventh in the series, just two points shy of fifth.

Quentin Marc Prugnières: “Today I finally got the podium which I just missed a few times this season and I think I deserved it! In both races I was able to manage the pressure from my rivals, and didn’t make any mistakes in either moto. I am happy with this podium; I have been waiting for this feeling of being on the box! Yesterday I took my first moto-podium in EMX250 and I did it again today. My second start could have been even better; my jump at the gate was OK but then I wheelie for a few metres. For sure if I could have avoided this I could have been looking for a moto win. I was a little stressed on the last lap, looking behind me to see how far it was to Elzinga, but I managed the gap until the end. The track here was very technical and that suited me. There’s no words to describe how I feel right now, but on Monday we’ll be back working on the track to get more; we still have two rounds, including the French one, and I can’t wait to race in front of the French fans.“