No outdoors for Cooper Webb! 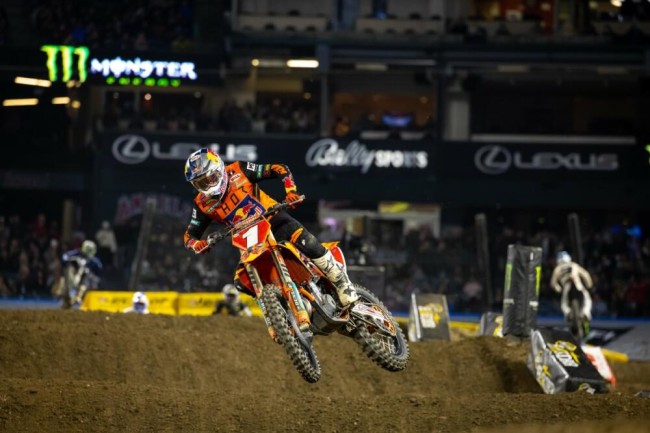 Cooper Webb has discussed his tough season in supercross and why he won’t race the US motocross series this summer when speaking with the guys at DMXS radio.

On not doing the outdoors Cooper said: “It was something the team and I discussed, the injury I had with my head has been a little bit of a tough one. It was just something that we all got together as a group, with Aldon and everyone and said let’s regroup and get ready for next year. They pay me to win and go win championships and if I’m not able to do that physically I think we were all on the same page, look to the future and get the body back right.

“So yeah, as of right now I won’t be participating in Lucas Oil motocross, but maybe later in the year I might do some races, I would love to somehow be able to do des nations but we will see how that goes.

“Jeffrey (Herlings), from my end it was like, he was coming. So when we made the decision it was kind of based on that a little bit, so now with Cairoli coming and Dungey coming back, there is a lot going on under the Red Bull KTM tent.

Webb also explained why the supercross season was tough with injury and the all-new bike.

“It’s been a tough year, every time we looked like getting back and injury would come and later in the year it kept happening whether that was on or off the bike, but I haven’t stopped fighting and I know what I got and there is plenty of fight left in me.

“The big thing for me is it was all new, nothing translated from last year’s bike. Some areas they improved but then there were some areas you were, you know, trying to play catch up on or improve that area.

“One of the things, at least from what I can remember, I haven’t dealt with in my career, is a lack of parts with the way the world is right now. Shipping, getting stuff manufactured, it’s stuff KTM I feel has always been number one about, if Roger says on Tuesday they need a part, it’s there by Wednesday but they simply don’t have the material. Up until Feburary we had a race bike and a practice bike and that was it, there was no spare bikes or spare parts.”

Listen to the full interview here.