Justin Bogle on Daytona: This was my type of track 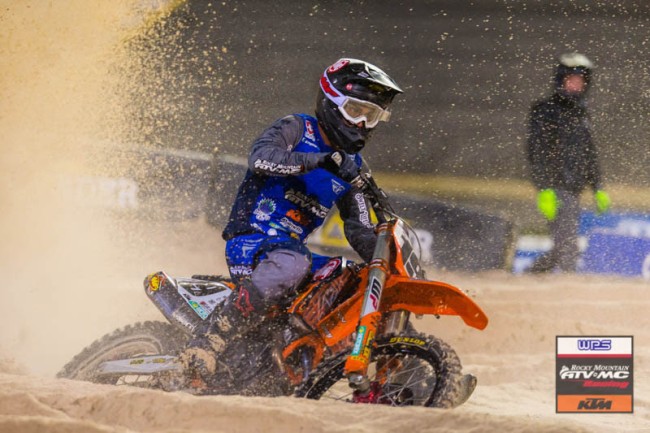 After a week off, Team Rocky Mountain ATV/MC-KTM-WPS headed to the world center of speed as round 9 of the 2021 Monster Energy Supercross series visited Daytona International Speedway. Both riders would ride solid, with Justin Bogle earning his second top ten finish of the season

Justin Bogle launched out of the gate in 450 heat 2 and rounded the first turn at the tail end of the top ten. He quickly started moving forward and the Alpinestars supported rider made a pass on the last lap to cross the finish line in 5th place earning a spot in the main event. Justin kept on the gas at the start of the main event and would be knocking on the door of the top ten before the end of the first lap. After making the pass into the top ten, Justin successfully defended his position for over ¾ of the race while making time on the rider in front of him. In the closing stages of the race, the Sweet Life CBD supported rider worked his way to 9th as he took the checkered flag earning his second top ten finish this season.

Justin Bogle: “I felt good and had the flow tonight. This was my type of track, hitting my marks and riding like I know I should. We’ll continue to progress and be ready to fight for another top ten in Arlington next week.”

Joey Savatgy overcame a mid-pack start in 450 heat race one as he battled his way into a qualifying spot, taking the checkered flag in 9th to transfer to the main. Joey had his work cut out for him in the main, as he worked his way forward from a start deep in the pack to slot himself in the 12th spot at the end of the first lap. The Palmetto Motorsports supported rider kept the pace, as he found himself battling for position as he held off advances from riders behind to finish the night in 12th position.

Joey Savatgy: “I was riding well tonight, though my start did not do me any favors. The main thing is I leave here healthy and keep progressing forward. I am feeling good on the bike and we will work on a few things before the next three rounds in Arlington.”

The team now travels to Arlington, TX for rounds 10-12 of the 2021 Monster Energy Supercross Series inside AT&T Stadium.