Interview: Nick Moores on his time working at CAS Honda and Factory KTM 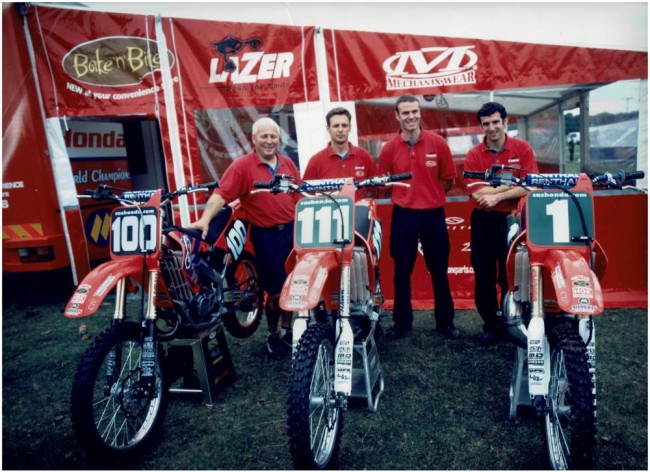 Nick Moores spent a number of years in the Motocross Grand Prix paddock and is a very well respected name in the Motocross world. Having worked with top teams such as CAS Honda and Factory KTM back when they were just starting to take things seriously, he knows a thing or two about how things are done.

Moores worked with a number of top riders and worked closely with Gordon Crockard who helped put Northern Ireland on the map in the motocross world, especially by finishing third in the world back in 2001.

We decided to catch up with Moores to discuss a range of things, here’s part one of the interview.

Gatedrop: Nick, initially how did you get into the sport and what got you into Motocross?

Moores:  Dad used to take me to watch now and then, we had a family friend who raced motocross (then scrambling!) and the whole process struck a chord with me. Watching MX as an impressionable 8 year old meant an early introduction to the smell of burning Castor oil and rear mudguards up to my head, but I was hooked. My Dad had some MX history with a Greeves Hawkstone and we (me & 3 brothers!) started motorised life on a home fabricated go-kart and progressed from there, sold it and upgraded to two wheels, then on to an MX bike. Dad took me to a couple of big races in the early 80’s at Hawkstone Park and Hatherton Hall and it rapidly became an obsession. I tried racing for a handful of years up till the early 90’s but it was almost impossible on an apprentice wage, blagging lifts everywhere, but the bug was firmly embedded.

Working in MX full time came about by chance, in the early 90’s I was travelling and helping Karl Prestwood who I had befriended through the late Miles Carter, another good friend, whom I had helped at his Moto-Zone track with the dozer and various other maintenance jobs. I did a few Nationals and Weston Beach race with Karl, things like that but very much part time. When Karl finished racing and worked with Paul (Cooper) I helped with their truck build and travelled at weekends to some races to give him a hand when I wanted a break from my Engineering business. After the Spanish GP and whilst testing in Belgium, I was asked if I would consider moving to Belgium to work full time with a Honda rider to do 125 GP’s and that was the beginning of my MX career and the end of normality as I knew it!

Gatedrop: You worked with a number of riders, who did you enjoy working with the most and why?

Moores: I have been blessed with the riders I have worked with, I reckon they would have more to say about not enjoying working with me. I had a great time with all of them, working in MX was a busy time for a large part of my life, I had a good work ethic and when a rider senses that, you don’t normally have problems either way. You have issues along the way but that’s down to the pressures of the job, I am still friends with most today, ‘walk in, sit down, have a brew friends’!

Gatedrop: During your time in the paddock you worked with a number of teams – two of them being CAS Honda and Factory KTM when they started to make a name for themselves in the Motocross world. What were your roles within the teams?

Moores:  CAS Honda contracted me to build the hands-on side of things, manage the development of the race bike, mechanics, team suspension, engines etc. I had a great network of businesses around my workshop and we had access to dyno facilities, specialist fabrication with exhaust and tanks, frame modifications and not to mention the machining we did in-house.

At KTM I was primarily contracted as mechanic to Gordon, we went there as a team and my role was to build his bikes, test with him and feedback as much as possible to the factory. When I chose to stay at KTM for 2003 I was asked to take on the role of engine service and development with R&D in Mattighofen, at the time this was specifically for the 2 stroke as another cylinder was being developed at the time, then the 4 stroke when the 2 stroke was finally phased out of MXGP. 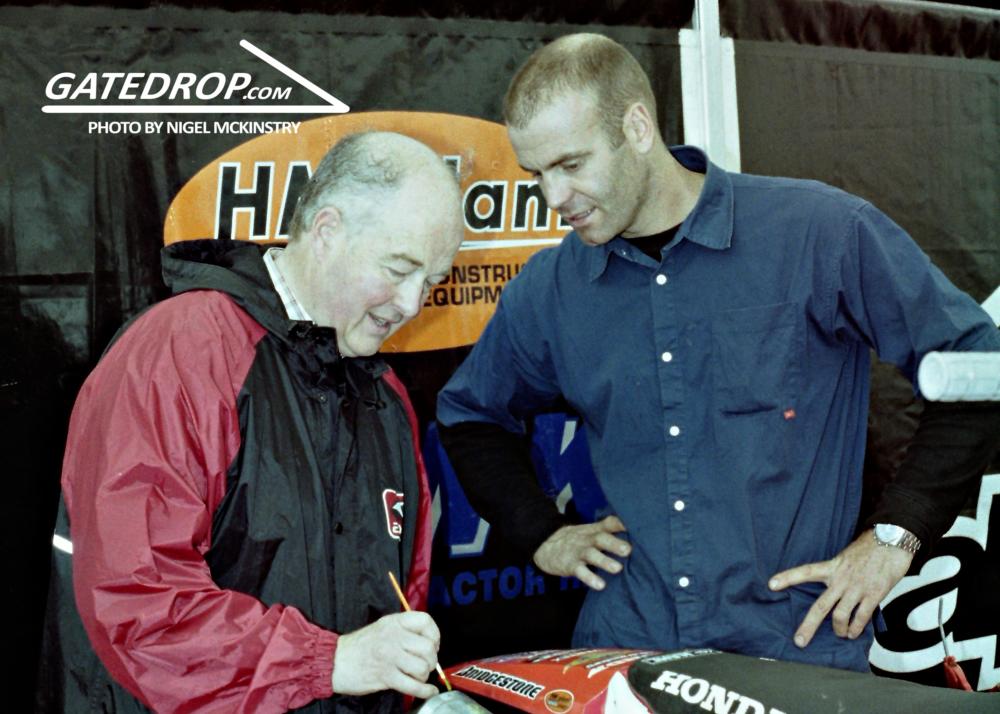 Gatedrop: How did the two teams compare – CAS being a privateer and British based team and KTM being factory, I can imagine it was quite a bit different?

Moores: Yes quite different, the pressure with CAS was from within me to succeed, the pressure at KTM, although I felt it more as a burden as time passed was very much shared or dissipated amongst the team, there were a lot of players with hands-on roles and at times it seemed difficult to make change or find new directions to follow.

I was introduced to CAS Honda after it’s induction year in 1998. They ran Gordon (Crockard) and others in a big effort to go National and GP racing. I knew of Gordon and at the time I was working with Neil Prince who was asked to be his team mate, my role was to take on the technical responsibilities for the team but still working directly for Neil. I enrolled a mechanic to help with GC’s duties allowing me to focus on the bike development and spec from my own workshop in Cheshire. It was a big step, a building year, busy months, weeks and days spent endlessly in the workshop, certainly up to the first test at Hawkstone Park (practice track that was), we stayed up all night finalising and building, the buck rested firmly in my lap! The biggest asset was that we could react and change as we learned and progressed through the season, testing was difficult with tight schedules but I always made sure we had race day options if required. I was never pressured to perform, that was naturally instilled in me from my father, we worked hard and we played hard.

At KTM Gordon and I had hoped to arrive at the factory for the first test with the majority of the main development work complete on the 250 bike, factory team and all that, but it wasn’t so, the bike was far from ready, the motor was still stuck in a time warp from the early 90’s it seemed and I felt my hands were tied in the direction they were going. In an attempt to change things I (unintentionally) created friction with R&D, encouraged by the team as they wanted progress too but the factory needed to move faster to develop what was needed for GP racing and that wasn’t realised till the first GP. The team were 100% behind racing coming off the back of 125 GP success. Kurt (Nicol) and Tobi (Gustafson) were great people to work with but it was hard to even find a close comparison with the KTM bike to what we had created with our private Honda’s, it was hard to build a balanced combination. It was a tough time all round but I didn’t want to be beaten. GC was disappointed and struggled to ride the bike the way he wanted to, he still managed to race well in certain conditions but we both felt helpless and a little embarrassed about the lack of progress.

I guess what I’m trying to say is that Factory teams seem like the ideal, the ultimate goal for riders and mechanics but sometimes being in charge of all things, even with production material is a better way to do business, as long as the team are all facing the same way you can build the bubble that is required to succeed.

Gatedrop: 2001 was a fantastic year for Gordon Crockard and Irish Motocross as he finished third in the world – what do you remember from that year, you must have some good memories?

Moores: 2001 was an incredible year, still somewhat of a blur, lots of memories but lots of driving, working, driving and working. It was somehow a fitting repayment to all the work we had all put in, to see your riders do well, on bikes that you have had a hand in developing. It was an immense feeling. GC was a machine on full gas, he rode everywhere and won pretty much everywhere too.

Memories of the podium have stuck forever, lots of celebration, there were also the days of commiseration on not hitting our mark either! I never looked at the championship, only the races separately, it was the only way I could process it and prepare accordingly, 3rd in the world still feels a little unbelievable even today.