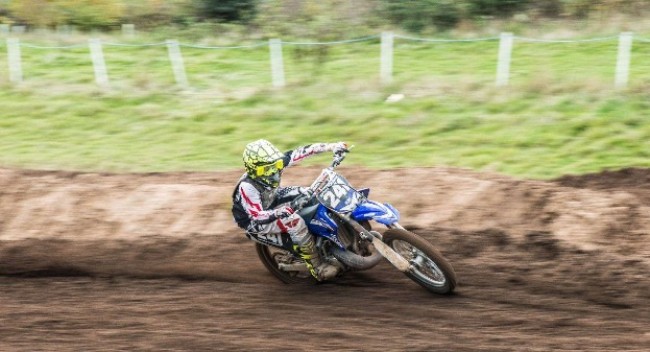 We had the privilege to catch up with a rider who competed in the British Masters in 2013 and whom has heard some many good things about the series last year that he is back and ready to fight for the 2017 125cc Pirelli British Masters Champion.

Nathan Claughan competed in the British Masters Series in their final year (2013) prior to the re-birth under our affiliation in 2015.

We asked Nathan to briefly talk about the series back in 2013 and his thoughts on coming back this year.

“Back in 2013 it was a good year and series. I only did three rounds (Whitby, Foxhills & Fatcats) unfortnately, however I managed to win two of the rounds and gained second spot on the podium in the other round” Nathan continues “I enjoyed being there because it was full of great people and ran really well, I have heard some great things about the series last year and really can not wait to start back this year”

Check out the rest of the interview with Nathan below:

What’s your thoughts on the Pirelli British Masters Series?

What’s your favourite track on the calendar and why?

“Favourite track has to be Whitby, as it’s one of the closest tracks to where I live and also it’s a really good track, which gets nice and rough with lots of jumps which is what I love”

Whats your plans for the series?

What’s your goal for the year at the Masters and other events?

“My goal for the year is to take each round by round and see where I am in the standings. It would be great to win the championship and the gain the champion title, but it’s a long season and anything can happen as it’s motocross. I will also be racing the Acerbis Nationals in the 125 class, which I have the same goal really. I hope there are no mistakes this season”

What’s your thoughts of the dedicated 125 class and why did you choose to enter it?

“It’s a great idea and everyone loves the sound of a two stroke, it will be by far the most popular class. I chose to race the 125 class as it’s my last year racing in the class, so I wanted to give it my last chance to win something before I step up to the MXY2 class again. I love riding the 125 and I would have stayed with the 125 class for at least two years when I first moved up but I got a ride for Honda UK so I moved to the 250f last season.”

“I have a few people behind me this year, Bikesport Newcastle who I get my bikes & kit from, Martin from Fatcats who sets up my suspension. I also have Holeshot Decals and Gas Crossley GCR who tunes my engine and looking after me at the Acerbis Nationals. Spanner Man Scott Irons is once again with me for 2017 and I am looking forward for him to be working with me again this year. Obviously all of this wouldn’t be possible without my Mam and Dad who give it their best to get me out every weekend and doing what I love”

We kick off at Hawkstone Park in March, what’s your thoughts on the track?

“My thoughts on Hawkstone, well I’ve never actually rode or been to the track but i’ve watched a few videos of the track and it looks amazing. I really am looking forward to riding there and experience the Hawkstone Hill”

What have you been doing over ther winter?

“The weather hasn’t been good so I haven’t been riding that much, but I am starting to ride now as I got a 450 to get some time in riding as the 125 will die in the bad weather. I have also been training a lot with my new personal trainer Chris Fit which I started back in September doing, we have been working reallt hard and he’s been getting me ready for this year. I can not thank him enough for pushing me and getting me race fit”

Do you have any advice for the younger riders in the sport?

“This piece of advice is what someone told me a few years back now. Keep chipping away every weekend and every time you ride, in the gym and out, just keep chipping away because it will soon come. The hard days will make good days easier so keep at it. Never doubt yourself and think high and postive”

We wish Nathan the best of luck in the 2017 Pirelli British Masters series and we will keep up to date on his season thoughtout the coming months.