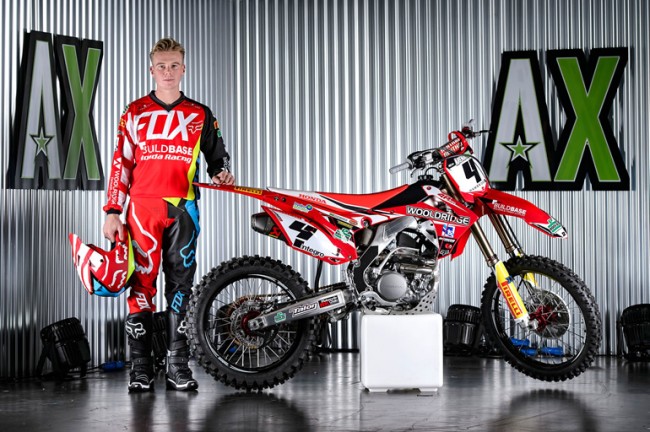 The British Areancross series starts this weekend in Manchester and one of the top Brit’s to watch throughout the series is Matt Bayliss. Last year, Bayliss took the series by storm and ended up finishing fourth in the series which was impressive considering it was his first indoor series on a 450.

He impressed so much in 2016 that Dave Thorpe has signed him for this year and he will be expecting good results from the British rider. We decided to catch up with Matt before the first round of the series takes place this weekend.

Gatedrop: Matt, the British AX series starts this weekend, this is your time of the year! How excited are you for it all to start?

Matt Bayliss: I’m looking forward to racing the ArenacrossUK again in 2017. I’ve just started riding again as I broke my thumb at the end of November but all is going good as of now.

Gatedrop: David Thorpe approached you to ride for his team this year, were you surprised by that?

Matt Bayliss: With Dave approaching me and my brother (Chris – who will ride in the pro lites class) to ride for his team, it was a real big surprise as I have never had a team ride in the U.K. I have always had private sponsors help me with my racing throughout my career.

Gatedrop: You are used to doing your own thing, do you feel the pressure of having a good team behind you?

Matt Bayliss: I normally sort it all out myself with my main sponsor Wooldridge, STS Offroad and Shocktech. But with being part of a team I don’t feel any more pressure than usual.  I just want to do the best I can.

Gatedrop: Going back to the British series last year, you finished sixth in the series, you must have been happy with that? What was the highlight for you?

Matt Bayliss: The series last year went really well for me and I wasn’t really expecting it considering it was my first year racing a 450 indoors. Finishing 6th was good but winning four heat races was so cool, it’s no main win but still a really good feeling.

Gatedrop: You have been riding some AX races to prepare for the British series, can you tell me what races you have competed in and how they have gone for you?

Matt Bayliss: I have been racing in Europe for about two months from Sweden, Poland, Holland and Germany. The results haven’t been amazing but I have been making most of the main events, I was very happy with that.

Gatedrop: What are your goals for the 2017 British Arenacross series?

Matt Bayliss: My goals for this year will to be try and qualify for every main event and just see how it goes from there. If I can get top five results and a podium then that would be really good for me.

Gatedrop: There are some top riders competing again this year, who do you think the guy to watch out for is?

Matt Bayliss: The top riders will be similar to last year with Ramette and the other frenchies but it’s cool to see some top British riders coming in to do the series.  It will be good for the crowd to get behind the British lot.

Gatedrop: You have been racing the British Arenacross series from the start, how has it improved over the years in order to attract the big names?

Matt Bayliss: The Arenacross UK series has come on a long way since it started, the way the show is presented and the tracks are built is just so much better compared to how it started and that’s why I love coming back to do it every year.

Gatedrop: Do you have a favourite round you look forward to the most and why?

Matt Bayliss: I always look forward to Wembley as it’s the closest to me and I get a lot of people come to watch that round.  It’s the final and we all know that anything can happen.

Matt Bayliss: I’d like to thank Graham Wooldridge and Dave Thorpe for helping me and my brother with the sponsorship for the season. Also, my dad who will be helping me out a lot throughout the series.