Interview: Michael Sinton on racing Ballykelly GP – once in a lifetime opportunity 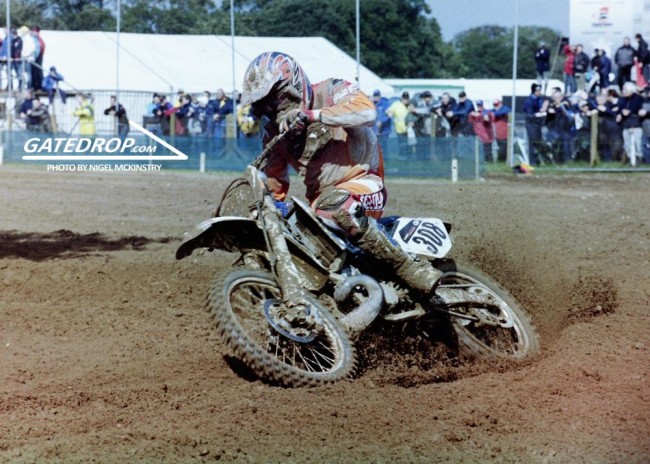 Michael Sinton had a good Motocross career in the Irish Motocross scene as one of the front runners when he was at his best. Back in 2004 the Motocross World Championship came back to Ireland after a number of years and it was held at the great track of Ballykelly (sadly no longer in use).

We caught up with Sinton to discuss his memories from racing the MX1 World Championship at Ballykelly alongside the best riders in the world.

Gatedrop: Michael, you decided to race the World Championship at Ballykelly in 2004. First of all, do you remember the decision behind contesting the event?

Sinton: This was my second year racing for GoMx on the Honda 450cc. 2003 had been a steep learning curve for me but I had picked up great experience riding and training with Brian Steele. In 2004 the racing was starting to come together nicely. I was starting to show some speed and consistency. I was leading the Ulster Four Stroke and fighting for podiums in the Irish and Ulster Open Championship.

Back then there was still an opportunity to get a “Wild Card ride” at your local GP. Stevie Mills approached me and asked if I’d like to take up the opportunity. Don’t get me wrong my first thought was I’m nowhere near fast enough for that. But I took it as a once in a lifetime opportunity to ride against the best riders in the world! A month before the event Stevie pulled out a new YZ 250 2 stroke for me to test. My first ride on it I went 2 seconds quicker around Tandragee than previous laps on the 450 Honda so we decided to go old school 2 stroke for the GP. With the thought that it might be a bit of an easier ride for the longer races in the sand.

Gatedrop: The week heading up to the event, do you remember your feelings – nervous, excited? Obviously, it was the first time Ireland was getting a GP in a number of years so there was a lot of buzz.

Sinton: Absolutely bricking myself! I’d put in a decent few weeks riding and testing. My dad had even worked out how much fuel I’d need for the longer races!(this might crop up again later)and we were just sorting the last details for the bike and team setup. We got great support from the team and my family at the time. Some nice new parts for the bike and a touring caravan so we could stay in the paddock.

You don’t realise the prep that is needed for these events until you have to go through it yourself. I vaguely remember a last minute medical check that was required for a GP entry. Luckily I managed to get this signed off by my GP a couple of days before the race. Yeah there was a serious buzz, I think being involved in the whole extravaganza added to it. I had actually ridden in the School Boy support races at the last 500GP in Ballykelly way back in 1994.

Gatedrop: Going out for free and timed practice against a number of world class riders – Everts, Pichon, Leok, Coppins and Strijbos to name a few. What was it like just to share the same track as them? Do you remember what you thought of the speed?

Sinton: Yeah the line up for this event was serious! Legends of the sport. I was so proud to be sharing the same track as them. Back then you still had to qualify through timed practice. As all the races had full gates so some riders didn’t make the cut. I like to think that I was realistic about my approach. It was to try and see if I could actually get into the main races. That would be a massive achievement for me. 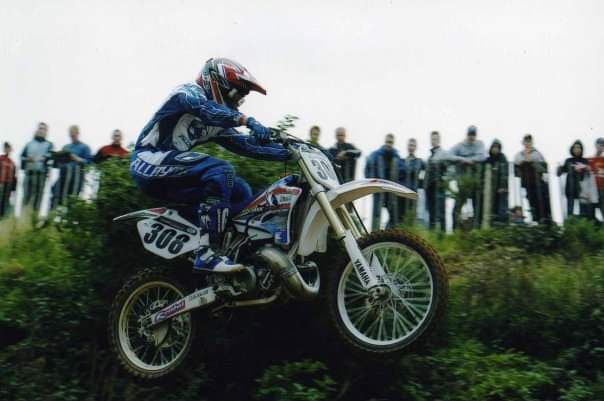 Sinton: The speed wasn’t really a surprise to me. I had ridden regularly with Gordon Crockard who was right up there and also competed in a few British Championship rounds so I knew it was going to be a step up from that again. But don’t get me wrong, when you’re giving it beans around a deep rutted corner and Stefan Everts comes past you on the pegs and glides over the massive double, your jaw does drop in amazement!

Gatedrop: Can you talk me through your races that day, were you happy with your riding/results?

Sinton: I knew I wasn’t going to be setting the world on fire with my results. The main target was to try and get into the main races. In terms of qualifying, I was actually happy with my speed I felt like I was mixing it and wasn’t far off the pace. Unfortunately by the end of timing I came up short. 1st reserve. As it turned out one of the riders had got injured so we got the nod that I could do the main races.

Race 1: I remember sitting in the holding paddock looking at all the riders around me….what was I doing here!! As I was last out onto the line I automatically got the very outside gate. Which was class as you were right beside all the spectators and supporters. Next thing I know the 30 second board goes up and your sort of go back into your standard start routine. I got a decent jump off the gate, but there was a crash in the first corner, I didn’t go down but caught one of the bikes. The race didn’t go well. It felt like my bike was completely flat, people passing me left and right. I pulled into the pits and as it turned out I’d actually caught my exhaust in the first corner and completely flattened the pipe hence the lack of power. I trailed home towards the back of the field.

Race 2:  I had lost a bit of confidence after the first race and to be honest I wasn’t really looking forward to race 2. We got the bike sorted new pipe and back tyre. I remember going up to the Bridgestone Truck and the guys just firing me a back tyre for free! I was known for being fairly heavy on the clutch so put in new clutch plates for good measure. 30 second board goes up, around to 5. We’re off. Surprisingly I actually get a really good jump against the 4 strokes and I’m mid pack and battling. The track has now got really rough which seems to suit the 2 Stroke. I remember being in a group with Richard McKeown and Adam Lyons so I knew I was going ok. With 1 or 2 laps to go I reckon I was just scraping into the top 20 and then the bike starts banging and popping and comes to an abrupt stop. Long story short we’d done a few miscalculations and the bike had ran out of fuel. I quickly got over our fuelling problems and really enjoyed the whole experience. There’s not to many people can say they lined up with an 8 times world champion.

Gatedrop: Obviously racing the two days at a GP, with racing Ulster and Irish Championships, you weren’t used to the two days racing but how did you find it?

Sinton: The 2 days didn’t really have an impact apart from the fact I had 2 sleepless nights instead of 1! The whole experience was brilliant. We didn’t have the biggest setup in the paddock and we were hidden towards the back but it was great having people come down and show you support.

Gatedrop: Ballykelly was a great track – shame it’s not around anymore. Can you remember what the track was like for the GP – did it get rougher than usual during the second day of racing?

Sinton: Yeah Ballykelly was a really good track and always laid down a challenge as it tended to cut up rough and the lines would change from race to race. For the GP the track looked amazing. The local club had spent a lot of time and effort on it. They had extended the back section and they must have harrowed it as the sand seemed deeper and softer. Riding it was completely different. All the jumps were bigger.

I remember two sets of big doubles that were added after the big table top mound in the middle of the track. You had to fully commit as both sets were straight after a corner. Compared to local races the track cut up differently. Normally in local races the racing line gets rough but here the whole track got used so there were bumps and ruts everywhere. Ruts on faces of jumps at local races tended to be straight but here they curved so your bike was in the correct position for the following corner. Intimidating would be a good word for it. 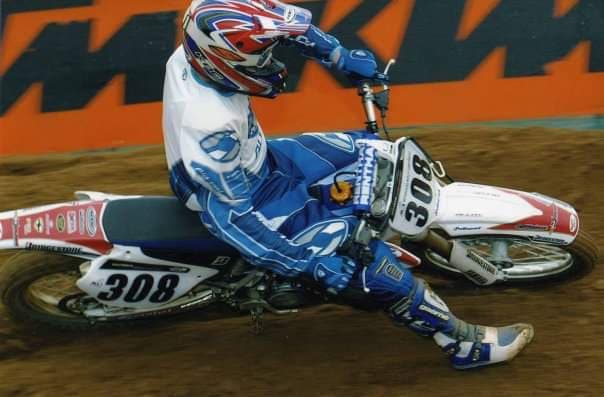 Gatedrop: I believe that was the only GP you contested. Did you think about racing the other Irish GP’s?

Sinton: Yeah. One hit wonder! There were GP’s in the following years at Desertmartin and Fairyhouse but I never really had the urge to enter again and to be honest probably knew I didn’t have the outright speed to be competitive. At that stage I’d graduated from University and was working full time so I was just enjoying racing locally.

Gatedrop: Now your racing career is over, what are you up too? I believe you do a lot of running?

Sinton: My last full years racing was 2008. I quit racing reasonably young I would have only been 25. My performances had plateaued and I had got to the stage were I couldn’t commit the additional time needed to get faster due to the usual life commitments – work, mortgages etc. I also needed to get shoulder surgery after dislocating it several times. So at the time it felt like the right thing to do.

I moved to Lisburn and did the gym thing for a couple of years. Then a local Tri club started in 2013. I joined to stop getting fat and promised myself I wouldn’t take it to serious. I was lucky enough to represent Ireland at Age Group level in 2015 in the European Middle Distance Championships in Italy. I also competed in Category 1 Tri racing in 2016/17 and did an Ironman in Copenhagen in 2018. So much for not taking it seriously!

Gatedrop: Do you still follow the sport by watching the GP’s and or AMA Supercross/Nationals?

Sinton: I don’t follow it massively but will try to catch highlights now and again. I’m enjoying the Facebook Page “Friends who like past Irish scrambles and Motocross” it’s good to reminisce! I still try and get down to help my dad out at Tandragee Motocross Track and we have some plans in the pipeline to grow that side.