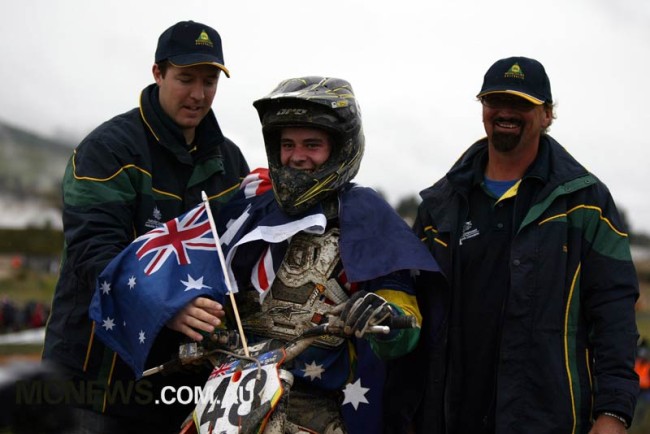 11 years ago, Jay Wilson from Australia travelled to New Zealand to contest the Junior World Championship in the 85cc class and he ended up becoming World Champion. There were a number of top talents in action that day including Seewer, Bernardini, Mellross and many more. Dylan Ferrandis was also in action but ended up crashing during the morning warm up on race day which ruled him out of the event.

We caught up with Wilson to discuss a very special day in his career and his plans for the future.

Gatedrop: Jay, back in 2009, it was a great year for you as you became Junior World Champion in the 85cc class. Going into the event, do you remember the hype, you must have been very excited going into the event?

Wilson: 2009 was a massive year for me, being a country kid from Australia and from a town of only 5000 people to being number one in the world over a weekend was a crazy thing to experience. At the start of the year I was riding Suzuki and that deal didn’t really end up coming together, so we got a call from KTM asking if I would ride for them. Part of that agreement with KTM was that I would need to qualify and attend the junior world championships.

To be honest before that I didn’t even consider it as much of a possibility. I had no idea going into that weekend how big of a deal it was, which in hindsight was probably a good thing. After that event my whole career trajectory changed. I realised this could be more than just something I’m good at, it could be a job and my entire life. After that event I also had a real love for New Zealand, I’ve raced there with Josh Coppins and my family and I actually try and holiday there every year. It’s a really special place for me.

Gatedrop: Can you just talk me through your races, from what you remember. It must have been great to have your home crowd support you?

Wilson: Honestly I had no idea what I was in for or how the weekend worked, I was a kid that enjoyed riding and loved throwing whips and scrubs, and that track allowed me to do that. On Saturday I would have done more laps then anyone there. Every time I was on the track it was like a Moto, I was going for it. I qualified P2 on Saturday and was blown away, then we had the crafty Frenchman of Ferrandis that was like 3 seconds ahead of me. Ferrandis ended up crashing out Sunday morning in warm up. I pulled a pretty good start in race 1 maybe even the hole shot and checked out to get the race win pretty easily.

Race 2 didn’t go as smoothly, it was pouring rain and I didn’t get the best of starts. I was able to get back to the lead and all I can remember is getting onto the back of Bernardini who was leading and we banged into each other for two laps every turn. I was getting so fired up, I finally made the pass stick and was leading with three laps to go then I crashed. I got back up in second and Seewer passed me a lap later. I was able to settle into third and take the overall win that day to become Australia’s first ever Motocross World Champion.

Gatedrop: At the time, what did you think of the level? You beat some good riders that day – Samuele Bernardini, Dylan Long, Hayden Mellross, Lars van Berkel, Michaboy de Waal and Jeremy Seewer to name a few. I believe Courtney Duncan was also riding!

Wilson: I think the best thing back then was no social media, well very minimal. I didn’t know anyone besides the Aussie guys that I had been racing, and I would say I was more the underdog of the Aussie team. If you look at some of the names that were there, they have went on to have a pretty successful career so far, and that’s really cool to see and also to see the quality of riders we managed to beat that day. 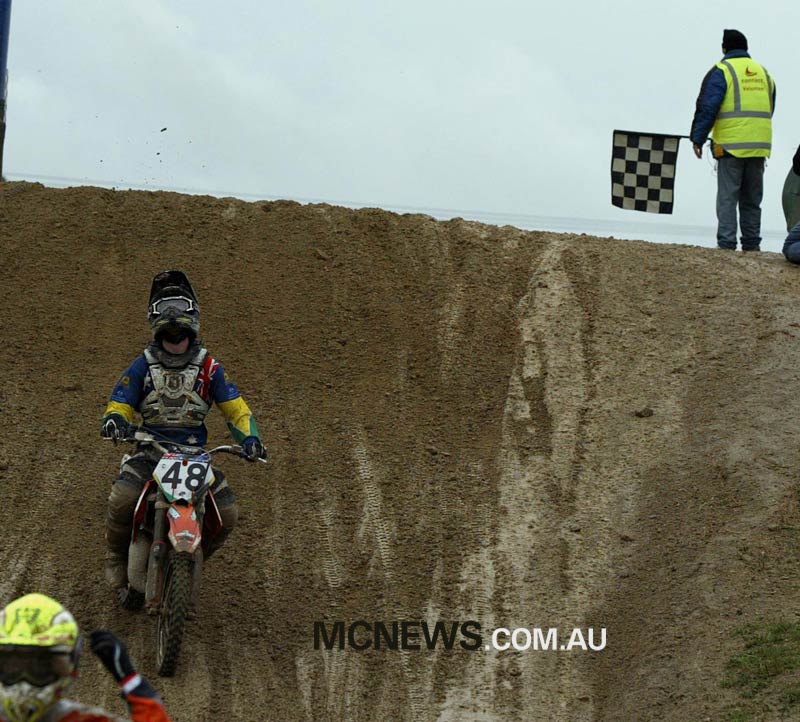 Gatedrop: What were your expectations going into the event, did you expect to win and go 1-3 and clinch the title – maybe you surprised yourself a little?

Wilson: As I said earlier, I really had no idea what I was in for. There wasn’t a lot of time to get nervous or anxious about the event because I really don’t think I could grasp how big it was. Once I was there I realised it was a pretty big deal and I can remember finding it hard to sleep while I was there. If I had have gone there and got a top ten I think I would have been happy, that was where my expectations were. I never thought I was going to leave there a world champion.

Gatedrop: What was the track like at Taupo that year?

Wilson: The track was really cool it was technical and had some big jumps for an 85cc, obviously it was pretty wet and cold being winter in New Zealand.

Wilson: It’s definitely one of the top moments of my career, especially being and adult and looking back on that achievement. All of my championships are pretty special to me because they all have had unique story’s that have gone with them. But being able to say that you’ve been a world champion in the sport you have made your career is pretty special. 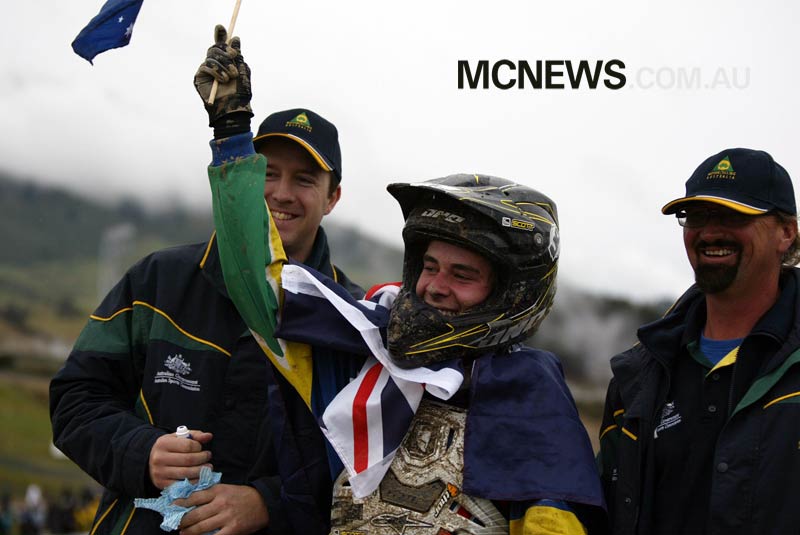 Gatedrop: You ended up racing the MX2 World Championship in 2017 with JK Yamaha but it was short lived. How was your experience racing the rounds that you did last year and what was the level like?

Wilson: The time I spent in Europe was challenging for a lot of reasons. It was a last minute thing that came up, I was in England to race Arenacross initially and a position came up to race GPs. It was a life goal of mine and the last year I could do it as I was going to be aged out. My fiance Misty was pregnant and ended up having our daughter while I was in Europe. I honestly didn’t give myself the opportunity to show what I was capable of over there. The team was small and although they did their best we weren’t ever going to be competitive at the level with the infrastructure and setup we had. Mentally I was in a bad space after missing the birth of my daughter and not being there for my wife, it just wasn’t the right time to be there. To be racing GP’s you need to have everything working for you, and unfortunately at that time it just wasn’t right for me.

Gatedrop: Throughout your career what races/memories stand out for the most and why?

Wilson: For me there are a few key moments. Winning the World Championship is obviously one, but also winning the 2015 NZ and Australian Motocross Championships. Having the uncertainty if I would race in Australia that year, I learnt so much that season racing out of my van with awesome people supporting me, nearly loosing my brother at round 1, meeting my now wife, crashing the week of MXoN. That year was literally a roller coaster with great life lessons.

The 2018 Supercross Championship was the first title I had won with my wife and daughter, which was really special for our family. Especially after the year we had in 2017 with Europe falling through and having our daughter. Also, racing the AMA Supercross in America this year. My wife and I worked for 12 months putting the whole thing together so we could do it as complete privateers. To line up at A1 and to qualify straight through to the main after all the work we had put in to make it a reality, it’s a moment I will never forget.

Gatedrop: What are your plans for the future?

Wilson: The plan for this year is to win both the Motocross and Supercross championships and then depending on how that goes we have been talking about making the transition to the 450 in the next couple of years. If and when we do that, I will hopefully have the opportunity to work with Josh Coppins again, it’s really important for me, that if I do it, it needs to be right this time.

I also would like to go back to America to race Supercross. We learnt so much and made some great connections so I think it would be cool to see what we could do with all of those skills. Even possibly doing some European Supercross races would be something I would love to do. My daughter is at a really cool age where we have a lot of freedom and she’s an easy kid, so any travelling we can do while racing is something I would love to be a part of.