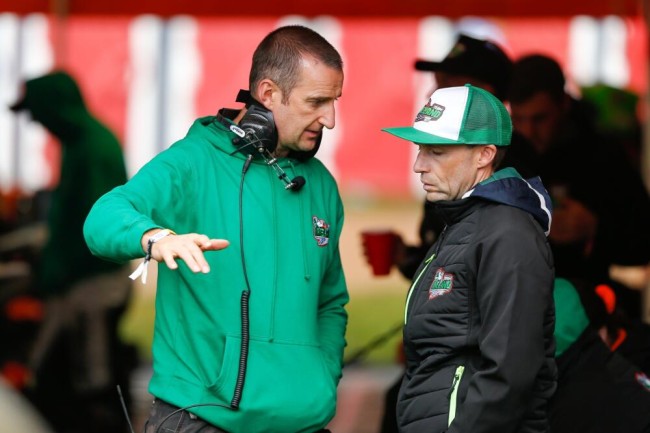 The RedBud MXoN was Mark Mooney’s first time managing the Irish team and despite missing out in qualifying, Mooney can be happy with the jump he done. The riders had a professional setup and everything they needed during the weekend, we just didn’t have the luck on our side to progress to the main event.

We caught up with Mooney to discuss the event and more.

GateDrop: Mark, this has been your first year as Team Ireland team manager, first of all what’s the experience been like for you here this weekend at RedBud?

Mooney: Listen, I’ve had an unbelievable time. The lads have been great to work with, they didn’t come once to me complaining about a single little thing. Maybe they wanted a bottle of water here or there but we couldn’t have really done anymore for them. We just had a bit of bad luck today and a bit of bad luck yesterday. Unfortunately it fell on Martin (Barr) and we were depending on him so much.

It is disappointing and I can tell you that he is more disappointed than anyone, it is killing him here. In general it ran really well and went smoothly. Anyone that I have spoken on the team here have given me good feedback and told me it’s never been done the way it has been this time in terms of having everything. If I had to rate it out of ten, our performance I think we did a ten as a team. We had some bike mechanicals which is just a shame.

GateDrop: In that B final, the start and first lap didn’t go so well but the way Stuart and John kept going was great and even Martin at the end was one of the fastest on the track… maybe we just needed an extra ten minutes!

Mooney: It didn’t start well but they were catching. Stuart always puts it in and at the end there he made passes in the last two laps. John was steady and the 250cc is a bit of a struggle around there and I think he was the second best MX2 rider. It’s just frustrating.

With the start, Martin was just saying his bike was misfiring off the line so something was probably lose on the bike and not connected together correctly. When he came in he spoke to Neil Prince who supplied the bikes and he said that the fuel line can catch in some circumstances especially in the wet conditions. There is a clip that you can put over it so it doesn’t happen but we didn’t know that and it’s very hard to hear it afterwards but we’ll know for again.

GateDrop: Just on John Meara, free practice on Saturday wasn’t the greatest but speaking to him after he wasn’t that worried because he knows he is a better racer and he definitely showed that in the qualifying race and the B final. During the first MXoN you maybe you always know what to expect from a rider but he stepped up to the plate…

Mooney: He did. When I picked John, I knew straight away what I was going to get from him. After free practice when he was twenty-seventh he just said don’t worry about it. I wasn’t worried about it at all either, he pulled ten positions from free practice to his qualifying race.  I believe if he had of been in the top ten I couldn’t have seen him drop back much. That is the type of rider he is, give him a chance and he’ll do it.

I think he rode really well, I’d give John as his first performance at this event, he didn’t let it get to him. Other guys come here for the first time and it’s not that they can’t do it but it can take a few tries. I would 100% bring John back again if he wants to do it again and if he wants to do it again. With John, I’m not sure if he wants to do it forever but certainly he could still do another year or two for us and we will probably need. The other two guys who have been brilliant for us and a great service but there’s not too many years left in them. We will just have to see what happens. 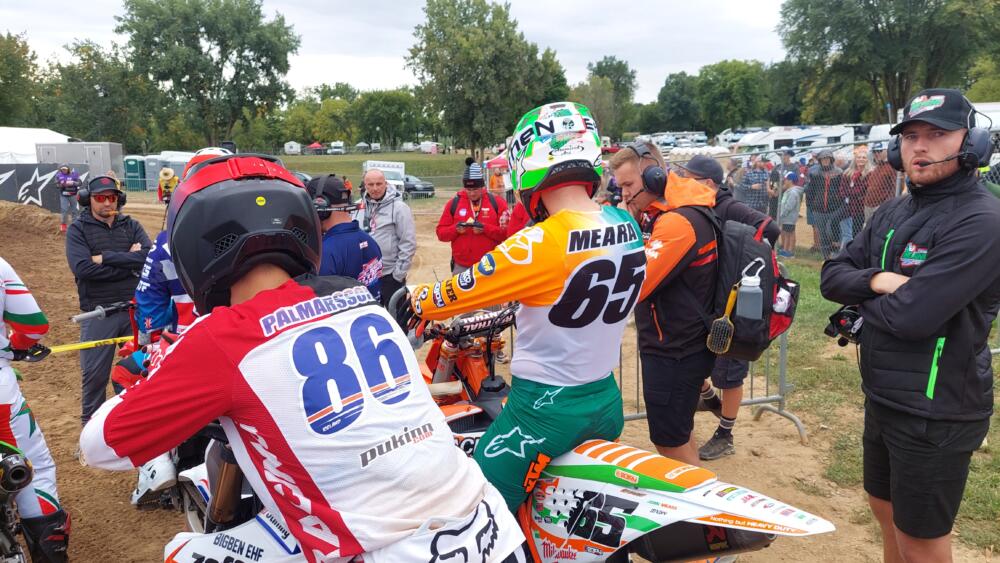 GateDrop: What did you make of the RedBud track? For me Saturday was very fast but then a bit of Irish rain overnight made things a lot better on Sunday and it suited us a bit better too… Just on John, he doesn’t have the experience riding a track like this that Barr and Edmonds do so for him to be as fast as he was, impressive…

Mooney: Obviously the wet does suit the Irish lads a little bit but yesterday, yeah, it was fast but they were well able to handle it. For Stuart, he wasn’t hitting the leap every lap and might have lost half a second there but that seemed to be one of our issues during the day. Martin was doing it but then he had a couple of crashes, one of them completely unavoidable with someone stopping right in front of him. John said he liked the track and he was going well, we put him on the fast Hitachi KTM and it certainly made a difference. I don’t think he’d have been able to do as well on a standard bike.

The Hitachi boys really stepped up to the mark and they were impressed with John as well. I was saying to Bryan Connelly a couple of minutes ago that he couldn’t believe how well he rode – he even said he’d consider him as a rider. That is really good feedback from them boys because they see it all so I am happy enough.

GateDrop: Just on a personal level what has it been like managing the team and having Cailum and Laurence here to help out as well? Looking back now would you change anything coming into it or are you happy with everything on you side – would France have the same sort of team behind you?

Mooney: First of all, I will have to be in this position to make that call again. I’m not sure if I will be in the same position but I don’t see why they wouldn’t. I wouldn’t change a whole lot – Cailum Meara and David Russell they have done unbelievable work this weekend. If I could I would give them a medal now, the pair of them. The lads that have showed up as well to help out – Ian Marshall, Stuart McLarnin and two of my friends, Paul Hyland, Tom and Laurence, even Breda Meara who helped with so many different things. I don’t think I would change a single thing and I’d bring the same people next time. Obviously we’d maybe have different riders who could ultimately bring in different people but as a team effort everyone pulled their weight so much. No one got the sleep they needed – they all just done unbelievably well.

Listen to all the team Ireland interviews below: