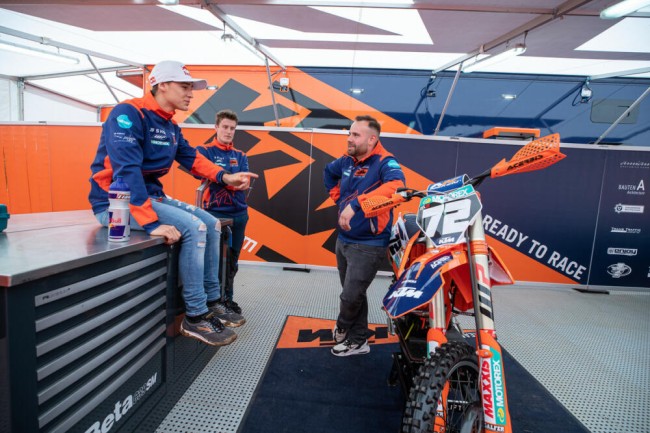 The DIGA-Procross KTM had a good weekend in Maggiora with Liam Everts impressing in what is only the fourth MX2 GP of his career and recently coming back from an injury. The first moto, the young Belgian really impressed finishing a superb fourth and even beat former MX2 World Champion, Tom Vialle.

A bad start made things more difficult for Everts but he still rode well to come back to thirteenth for eighth overall at a very technical Maggiora track.

The DIGA-Procross KTM had been dealt with some very sad news after Kegums that their MXGP rider, Thomas Kjer Olsen was placed in an induced coma but thankfully he is making good progress.

We caught up with DIGA-Procross team manager, Justin Amian to discuss the team and much more.

GateDrop: Justin, overall a very positive day for the team and Liam Everts for him to already finish fourth in an MX2 GP moto, you must be happy with the weekend?

Amian: Yes, definitely. We are really happy with the progress. Unfortunately, both starts weren’t really what we expect, he was more at the back but in the first moto he did the first few corners brilliantly and was already at the front. He kept his pace and had a good fight with some title competitors so he did great.

GateDrop: Mentally that must be a good confidence boost for Liam because this is the first time he’s really ran at the front of MX2 so now he knows he can do it…

Amian: 100%. Always the first time up at the front is a mental game but he succeeded with that. For sure it’s a big mental boost for him. In the second moto unfortunately, he had a bad start, but he was fighting and we all know if you aren’t directly right up at the front you cannot fight to make a really good result – that has to come with a good start. All in all, we are really happy, and he did good.

GateDrop: I think we have to remember that before his GP return at Arco I believe he only had one day on the bike and this is just his third GP back – very big strides already and did you expect this to happen so quickly after the injury?

Amian: No, we don’t expect that actually and especially for his rookie MX2 season. For a rookie season you can’t expect so much, you have to keep in mind what you just said, this is just his fourth MX2 GP of his career. He is still a rookie and there will be up’s and down’s. I think if you can do it once to have a really good result then you’re able to do it again. Now he knows he can do it so that is something that he should keep in mind for the next races. 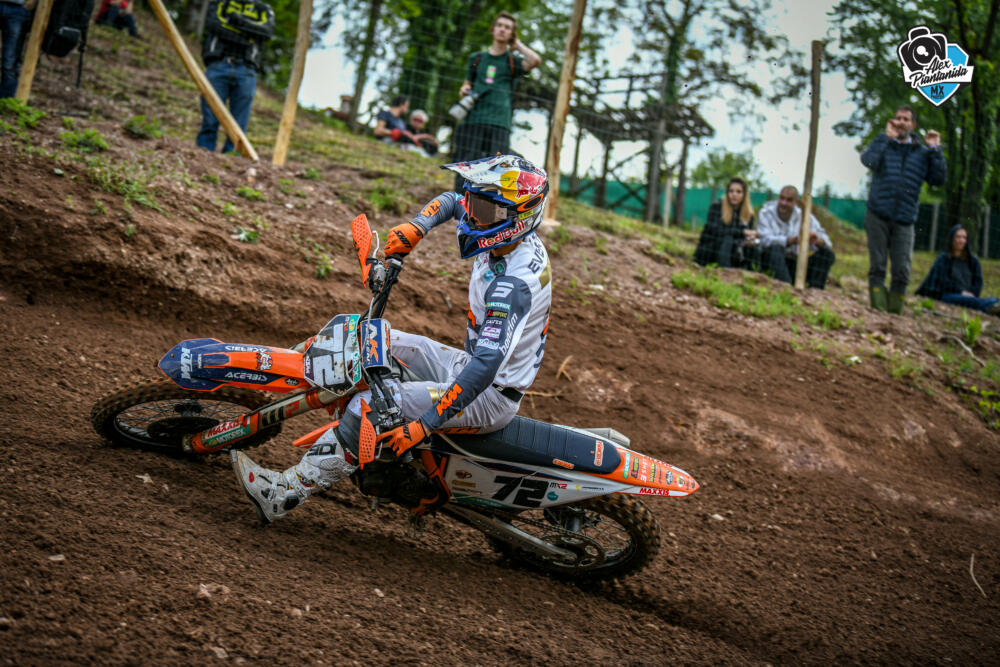 GateDrop: One thing about Liam, he is an Everts at the end of the day so he has an unbelievable style and is great to watch. I’ve noticed that when the tracks get technical, he excels and that’s when the results come. Do you think one weak area might be when the tracks aren’t quite as rough and it’s more balls out?

Amian: The speed in the MX2 and MXGP classes is really high so the riders also have to get used to it. This is something for sure he has improved already but these guys are the best ten or fifteen guys in the world out there on top. It’s about pushing and finding the limits step by step.

GateDrop: Just on the MX2 World Championship – there’s a lot of people complaining about the low numbers this year but it looks to me that on any given day there’s around 15 guys that have the potential to podium and the level is high. Vialle and Geerts maybe have an edge on the rest but they’re probably the fastest and best MX2 guys in the world even if you include the AMA riders…

Amian: Yes, I see the same and the same like in the MXGP class. We see that we have between 15-25 riders on the gate but please, make me a list, what guys are able to make a top ten result and is not there? You will not find so many guys and then we see that the best guys are already there.

GateDrop: Next up is the sand track of Riola which should get really rough and technical. That should be a good track for Liam?

Amian: Yes, it is a good track for Liam and also for Liam it’ll be his second time racing a GP at that track because last year he raced his first GP ever there and I think he finished fourteenth overall (he actually finished thirteenth overall). For sure it is a track that suits him really well. 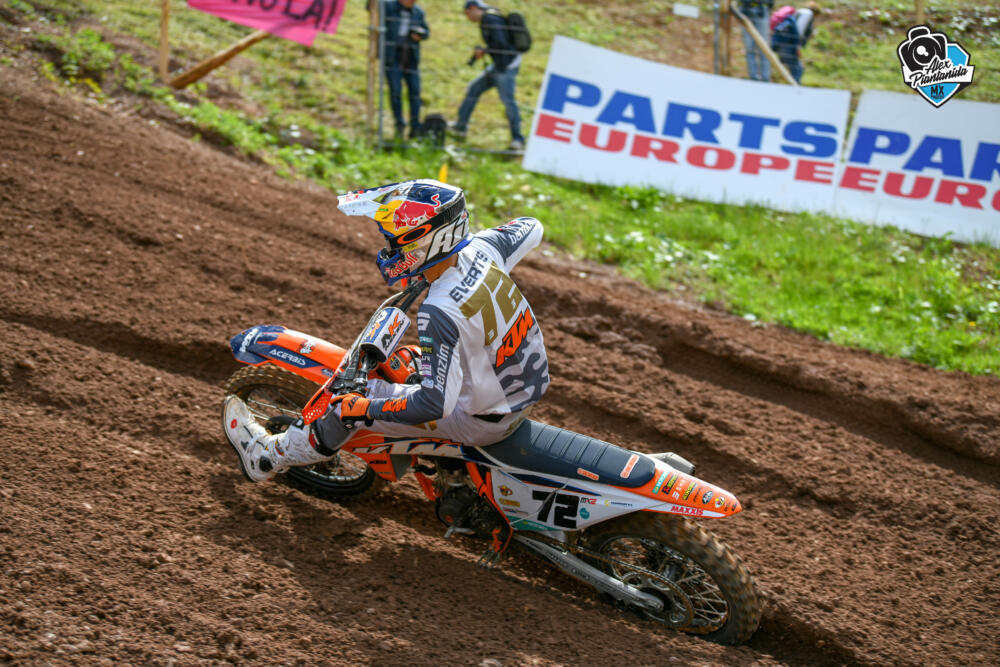 GateDrop: What’s it been like from your side not only to have Liam under the awning but also Stefan around? He’s a ten times World Champion so knows plenty about the sport – you must be able to take tips from him?

Amian: For sure, we are really happy and proud to have the Everts family under the tent including his grandfather, Harry. They have some amazing history and we are proud to be apart of it and also to represent Liam to our team. For the first year we are already really happy with it and us as a team can still learn things about the family and the past. But I think we are together as one unit and are a good group of people. We can progress and develop Liam, for sure.

GateDrop: Can you tell me a little bit about Liam’s equipment? I believe he is riding a Factory KTM from last year? That has probably worked out to your benefit because the new model doesn’t look to be at that level just yet…

Amian: Yes, we have the factory bike from last year, the World Championship winning bike you can almost say from two years ago. The bike is really good, the setup we are really happy with it. There’s nothing to complain about. We are happy with what we have and from my side we don’t need any other bike. With this bike and this rider, we are happy with it.

GateDrop: Just on running an MX2 and an MXGP rider, not so many teams do that, they tend to focus more on the one class… what’s it like running one rider per class, busy I imagine?

Amian: At the beginning we also ran just MX2 riders but this year we moved up to MXGP but with this type of rider in Thomas Kjer Olsen, we were happy and still are really happy about him and wish him all the best. We hope that as fast as possible he can be back with a quick recovery. For us as a team we have double time with work on what we have to do during the weekend to support an MXGP rider but for us it is really fun and it’s a new chapter and challenge for the whole team. We don’t want to miss that and for us it’s a really good combination.

GateDrop:  Just on Thomas Kjer Olsen, our thoughts are with him but what’s the latest on his situation that you can publicly say?

Amian: Thomas is on the way to recover and we are really happy about the progress with what he did the past couple of days. I hope soon that we can have some more really good news but with an injury like that you can’t have day-to-day update but what I can say is that there’s a possibility he can recover 100%. Him, the family, all the doctors and everybody around him give the best, we are really satisfied and believe that he can come back 100%.

GateDrop: It’s a big awning for one rider – will you think about a fill in rider in either class MX2 or MXGP for the rest of the season?

Amian: First of all for us it is important that Thomas gets rest and not to think about any fill in rider to our team at the moment. He is for us priority number one so that is point one. Point two is that the season started in February and we have already done seven races so we aren’t even halfway through the season yet. To answer your question, yes we are looking at a fill in rider for the MXGP class. Maybe soon we will hopefully have some good news but right now nothing is decided yet. We keep our eyes opened and will have a look at what we can do.

GateDrop: Whenever you look at who’s available there’s not many, but Max Anstie couldn’t hasn’t got anything – would he be of interest?

Amian: Max Anstie is for sure a good rider but from what I hear he will stay in USA and we are in Europe but I don’t know what his plans are. I am not in contact with him, maybe if he reads this article, he can contact us (laughs) and then we will see.