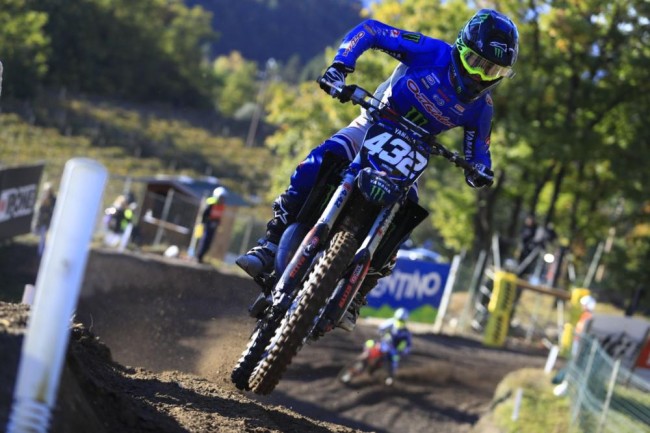 Marco Kamper caught up with van Erp after Arco di Trento to discuss his season and more.

GateDrop: Let’s start off with the first race, what happened, especially with the start?

Van Erp: I didn’t have a bad start, I was good out of the gate, like 6 or 7 into the first corner. My team mate fell and I rode into the back of him. Other people piled on top, so it took a while to pick the bike back up and get going again. After that I was just trying to go as fast as I can to catch up. I was just so angry, made a couple of mistakes and get tired. I went from p38 to p16. Not the worst race, but I can do a lot better with a good start. Hopefully the first moto in Mantova will be better.

GateDrop:: I checked the stats, because they’re fun, the last lap of the first race was your personal best, is that something will be seeing more this season?

Van Erp: I think you will be seeing this more this season, for sure I’ll try to do it in Mantova again maybe. I have a good trainer, been working a lot physically, so I’m strong. I feel good at the moment, and will try to take a podium at Mantova to finish the season strong.

GateDrop:: About that second race, completely different situation. It looked for a brief moment you were going to catch Lucas Coenen, how did that happen?

Van Erp: The second race was good. I had a great start, second I think, I was behind Coenen 4 or 5 seconds for most of the race. After ten minutes I got into a rhythm and closed the gap. After some lappers, he (Lucas Coenen) give me a block pass and I crashed. I quickly got up, but couldn’t find a rhythm again, but I still take second, so it was a good result for me.

GateDrop:: Three overall wins this season, quite the difference to the first two rounds and especially last season, what changed?

Van Erp: Yeah, I feel much better now. In the beginning of the season I was a little bit struggling with the bike and myself. The two month break, I did physical training, so I feel strong now. In Teutschenthal I got the win, in Spain and here in Arco. I hope we can go and take a win at Mantova.

GateDrop:: Last question, it’s about the bike, compared to two years ago, when being on the Yamaha was a disadvantage, this Yamaha seems competitive, what’s your experience?

Van Erp: Last year was difficult, I didn’t have a good feeling on the bike. This year in the beginning of the season I was struggling with myself, but after a while we got the bike the way I want and everything started coming together. The bike is performing well now and we hope the bike will be strong at Mantova. The plan is to take two good starts, stay calm and aim for that podium.