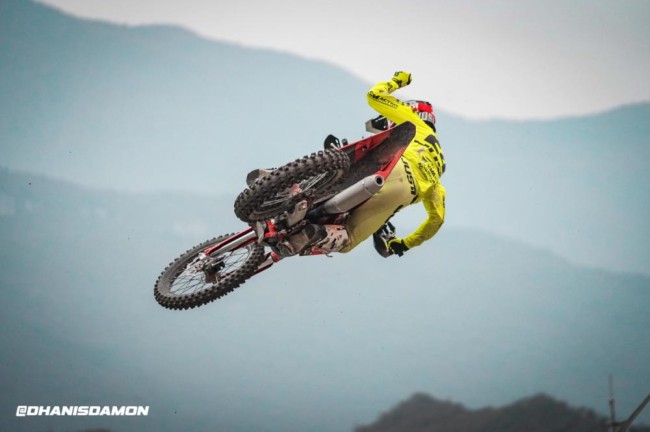 Coming into the 2021 season, Kevin Horgmo made the tough decision to drop down from the MX2 World Championship to the EMX250 series after signing a deal with the SM-Action GasGas team. The Norwegian has had a good season and finally stood on the top step of the podium at Arco di Trento.

Marco Kamper caught up with Horgmo to discuss his win, talent in Norway and plans for the future…

GateDrop: With you first EMX250 win yesterday, how are you feeling today?

Horgmo: Quite good and really happy. The body isn’t too bad (muscle soreness). Yesterday I felt confident, pushed the entire race. I didn’t take any big risks or have hard hits or anything, so the body is fine. Of course I had one night of bad sleep thinking of all the things I could have done different in the first race, but I’m content about the overall.

GateDrop: About that first race, you were following Bonacorsi, trying in multiple places to pass him, but it didn’t work. What happened?

Horgmo: I think the fast lines in the first race were more to the inside, the second race the lines opened up a bit more. I was just following, trying to go around him. When I was going up the inside, I would have taken us both out. I didn’t commit all the way, backed out at the last second a couple of times.

GateDrop: Going straight to the second race, it did work out, you made the pass for the lead, What was the difference?

Horgmo: I had a slightly better start and then again following Lapucci. I felt like he was holding me off a little bit, he was trying to brake check and play some games. A couple of times I was past him, but did not make the pass stick. In the end I passed him around the outside and made the line work when he went defensive on the inside. From there I did not look back, gaped the other guys by three seconds I think and try to control it until the finish.

GateDrop: One thing I noticed, the second corner after the finish, before the step-up. You were so quick through there. It looked like a tricky corner. Do you excel at technical sections?

Horgmo: Yeah I think so. When I’m confident I can find good lines. I don’t think a lot of guys were taking the same lines as I took. Watching the MX2 today there were more guys taking those lines. I went narrow on the first right corner to take the outside on the next corner keeping my momentum. I kind of saw it Wednesday during the MX2 race, but I did think they were riding exactly like me. Lapucci when in front of me didn’t use that line. I felt like there I caught up a little bit. The corner before the last downhill before the pitlane I had a good bump over the jump before the scrub jump. I took like a second to Bonacorsi and Lapucci at that section.

GateDrop: Lapucci has a big lead in the championship, do you have a battle plan for the last two rounds?

Horgmo: I was kind of thinking about the championship some rounds ago. Now I am not thinking too much about it, because I know Lapucci is far off now. I take it race by race and then I can just send it and hope for the best. We will see where I’ll end up in the championship. I will just try to win as many races as possible.

GateDrop: One thing I noticed is that there are a lot of Norwegian riders, Norway is not known as a motocross country. You were one of the first of this new ‘Norwegian Legion’ to ride near the front of the EMX classes. Did you notice as a child, riding 65cc and 85cc, you were part of this strong pack of riders?

GateDrop: Yeah I think so. We have a training group with my trainer Kenneth Gundersen, a former GP rider. When I was a kid there were some guys trying to race the European and world championships without great results. This did show us that it was possible to race the GP’s and EMX championship coming from Norway. I think of the guys that are racing today and yesterday, I kind of have been making the plan…

GateDrop: The pioneer you’ve been.

Horgmo: The pioneer yeah (laughs). I guess it is good for the sport in Norway that a lot of talent is coming in and after Håkon Østerhagen in the 125 we have a lot more guys coming. I’m not sure what the situation is right now, but we’ll see in a couple of years.

GateDrop: What are your plans for next year?

Horgmo: That will be decided this week, I’m not completely sure yet. I hope to be able to race mx2 next year.

GateDrop: What was it like going from MX2 to the EMX250 series?

Horgmo: It didn’t feel great at first, but I think it has been a good opportunity for me. Obviously I want to race in MX2, riding the best guys out there and to be proving myself. For instance this year when racing the EMX250, winning like yesterday, where would I stand in the MX2? I felt great, so maybe it could be a top 5, top 10, top 15, 20 or 25. Nobody knows…

Horgmo:  (laughs)Yeah, maybe a podium. Nobody knows for sure, that’s how it is I guess. That’s why I’d like to race in MX2 again, to prove myself

You can see some brilliant Kevin Horgmo Vlog’s on his YouTube channel, here.