Interview: Glenn McCormick – it was a great experience! 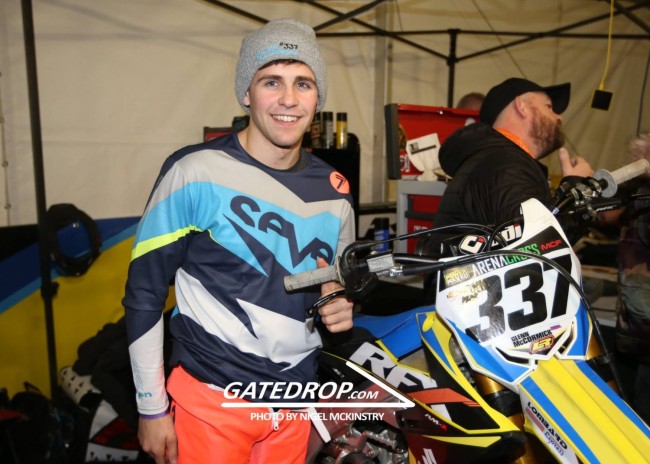 What a difference a year makes. One year ago Glenn McCormick was watching the Belfast Arenacross on crutches as a spectator and this year he was Evgeny Bobryshev’s teammate for RFX Suzuki!

Glenn only got the call on Wednesday night before the event and less that two days later, he was riding a GP level bike he had never sat on prior to first practice in the Arenacross premier class!

Unflustered, Glenn used his smooth and technical style to adjust to the machine and by the end of the weekend he was right on pace with the full-time Arenacross professionals!

We caught up with Glenn after his action-packed few days to get his thoughts on what it was like to be Bobryshev’s teammate for the weekend and get to compete in his home Arenacross rounds.

How do you sum up your weekend – it’s been a hectic few days for you!

Yeah from Wednesday night when I got the phone call late on it’s been a hectic few days to get everything ready. then Friday we were thrown straight into the deep end. I just progressed all weekend, I came in with a clear mind and just got on with it and really enjoyed myself. I progressed all weekend and I think it showed in the last heat race there, I was right on the back of them guys. I loved it, it was a great experience, who gets to ride with Bobryshev in the same team at the weekend!

And you were riding basically he bike he will be riding in Argentina for the first MXGP! How was it?

I didn’t realise until after the first day and then they told and I was a bit surprised! But the bike is mega, the team is mega. They have been brilliant with me and I just can’t thank them enough, it’s been a great experience and something I will hold for a long time. It’s cool.

The first time you went on the track were you nervous? You haven’t done arenacross in a few years let alone on a 450?!

Funny enough no, I wasn’t. It was drilled into me from everyone that I had no pressure whatsoever. I was just coming here to enjoy myself, especially in Belfast, there is no better feeling than doing this at your home race. I just chilled and let it come to me sort of thing. I had a great weekend and the progression over the weekend was amazing.

You are quite a technical rider so did that help you adjust?

Yeah I guess it did, I have a track like that out my back which I ride round on my trials bike lap after lap, so I adjusted pretty quick. But racing against those guys, they are on it, they are fast! So racing against them it was just something else and it was nice to get a bet closer to them as the weekend went on, so I am really happy.

The last heat race you seemed the most confident and were with them the whole way?

Yeah, it hasn’t been a problem doing sections but it has been putting the sections together for a full lap and I did it in that last run, I was really enjoying it.

And just on outdoors, what are the plans are you back on the wee bike?

Yeah back on the wee bike, I have had a really good winter and a lot of people weren’t really happy with me doing this but I could see their point, the risk is always there, but it was an opportunity I couldn’t say no too. outdoors and the British is my main focus, the MX Nationals in the pro class and then we will maybe try and do a few European rounds so it’s going to be an interesting year.

Will you be doing any racing at home?