Guillod impresses at Spanish MXGP – everything is positive 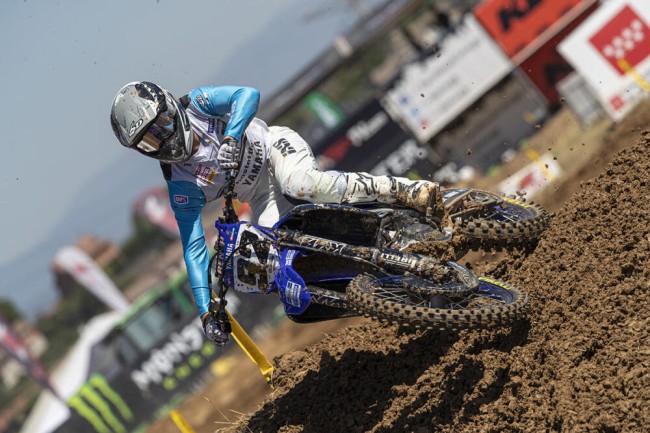 The iXS hostettler Yamaha awning was a hive of activity at the ninth stop of the 2022 FIM Motocross World Championship, the Grand Prix of Spain, earlier today. Valentin Guillod made his first appearance at a Grand Prix since February and sat alongside Kevin Brumann, who was very eager to maintain the momentum that he gathered in a fine showing at the previous stop.

Jumping in at the world’s highest level can be difficult, but Guillod thrived aboard his YZ450F. ’92’ was very competitive throughout the weekend and made progress when others failed to – he charged to the top ten in the first premier-class moto and recorded a very strong tenth-place finish. The final moto was even more impressive; he ended lap one in fifteenth and charged to tenth yet again! 10-10 scores left him in twelfth overall on the day. An incredibly impressive effort, finishing top ten at the world’s highest level, and testament to the team’s ability.

Coming off of career-best results at the Grand Prix of Sardegna, Brumann showed similar form in Spain and charged to eleventh in qualifying on Saturday. A freak issue stopped him from replicating that result in the first moto of the weekend, unfortunately, but he was back for more in the final stint. Unfortunately, a small error early in the second moto left him with a significant amount of work to do on the tough track. Brumann charged on to salvage seventeenth and twentieth in the overall classification. ’87’ is still seventeenth in the championship standings, but has edged closer to the riders ahead.

Valentin Guillod and Kevin Brumann will leap into action at the Grand Prix of France, round ten of the 2022 FIM Motocross World Championship, next weekend. The fixture will run on June 04/05.

Valentin Guillod: “It was a really good weekend! Today was a very good day. I am very happy to go 10-10. I am going in a good way, especially seeing as I am back in the top ten. I was struggling a little through the weekend; I just wanted it too bad. Overall, it was great. The bike is working well and the speed is coming back. Everything is positive!”

Kevin Brumann: “It was a tough weekend, but I’m happy with my speed and that we managed to salvage some good points in the second moto. We get to go again in France next weekend, so there is not long to wait and we can get back where we belong.”