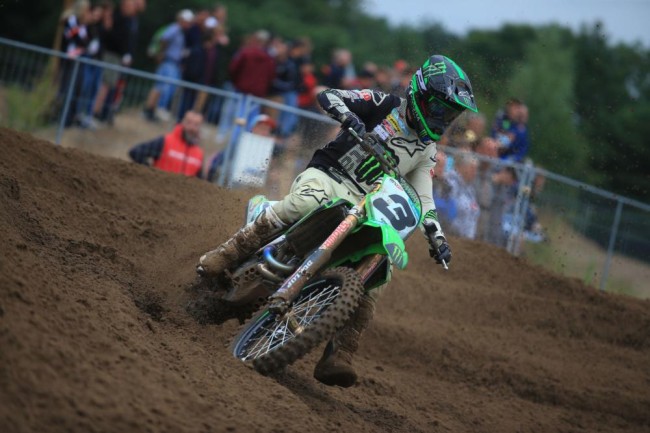 Romain Febvre has won three motos and claimed six podiums in his second season with Monster Energy Kawasaki and after the close contest with Jeffrey Herlings at the weekend for his home Grand Prix at Lacapelle-Marival sits just 6 points away from the Dutchman and the MXGP lead.

2021 has been the 29-year-old’s most competitive year since his rookie title-winning term with Yamaha in 2015. The Frenchman has clearly bonded with the KX450F, noted for its easy handling and despite some mistakes during the campaign – such as his last lap error while leading in Turkey – he has remained healthy and in contention. Febvre’s alliance with Kawasaki is so strong that he agreed to remain ‘in green’ for another two seasons, despite the shift of operations from KRT to the IceOne team for 2022.

“It’s difficult to say,” he remarked when asked if the KX450F was the most formidable package he has steered in MXGP and seven seasons in the premier class. “When I was with Yamaha their bike was good also.”

“I think my level [of performance] and the physical condition has increased, and we had to adapt the bike to that,” he offered by way of explanation for his form. “This week we made some changes that worked very well for me [at Lacapelle]. I’m really happy with the bike and it’s also why I signed two years again with Kawasaki.”

Febvre deflected pressure over his credentials for 2021 and being Kawasaki’s first world champion since 2006 and only the second in the four-stroke era. “The red plate means nothing at the moment because we are all so close,” he stated. “It’s nice that three of us are there. Every weekend one of us can have the red plate! Hopefully it will last until the final round and we know we’ll need to take something out of the pocket in the final rounds.”