Cairoli: The championship is still possible but it’s really difficult 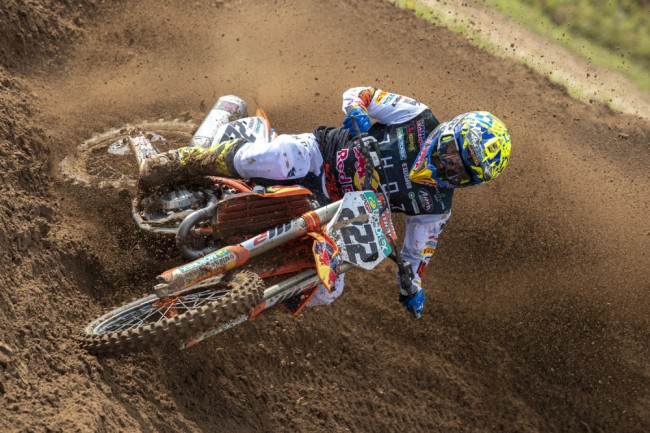 Six rounds of 2021 MXGP in just four weeks leaves nine-times world champion Tony Cairoli with a tough challenge in his bid for a tenth crown and before the 36-year-old ends his full-time race career.

The Red Bull KTM rider is facing tough odds after his crash in practice for the Grand Prix of Sardinia – round ten just three weeks ago – saw him suffer an impact to the left side of his torso.

Cairoli was able to race the following weekend at Mantova and help Italy to Motocross of Nations success but the exertions of the event came back to haunt him at the German Grand Prix a week later when he could only ride to 7th. In France last Sunday he neared his sixth podium result of the season – he was 5th overall – but was still downbeat at the lack of fitness that saw him caught and passed by Tim Gajser in the second moto.

The Sicilian has been unable to ride the KTM 450 SX-F in between races or even complete physical training sessions. “A lot of painkillers during the week and anti-inflammatories as well,” he says. “It is a difficult situation, but I don’t want to give up. I want to finish the season strong.”

Cairoli missed both races in Sardinia and with Gajser and Jeffrey Herlings winning and also Romain Febvre and Jorge Prado claiming moto victories he has slid to 5th in the standings and 73 points adrift of his KTM teammate. The veteran’s biggest problem is the rapid frequency of the remaining MXGP dates, with five of the six taking place in Italy.

“I’ve tried to heal as fast as possible because I know it will be crazy with the racing,” said Cairoli exclusively. “We try to do the best we can but the ‘stretch’ I have with the muscle around the ribs is not really getting better because I’m riding. If I had two weeks rest then it would be OK but now I’m just hitting it, and it takes longer. After Spain I hope I can be better and try to get on the podium every race. That’s the only goal. The championship is still possible with the numbers but it’s really difficult with these guys in front. If it was one guy then anything can happen but four?! It’s quite difficult. All we can do is try everything we can and see.”

From eighteen years of Grand Prix racing Cairoli – when fully fit – has only missed the top three of a championship campaign once.