Barcia on Indy 3: A lapper come across on me and took me out 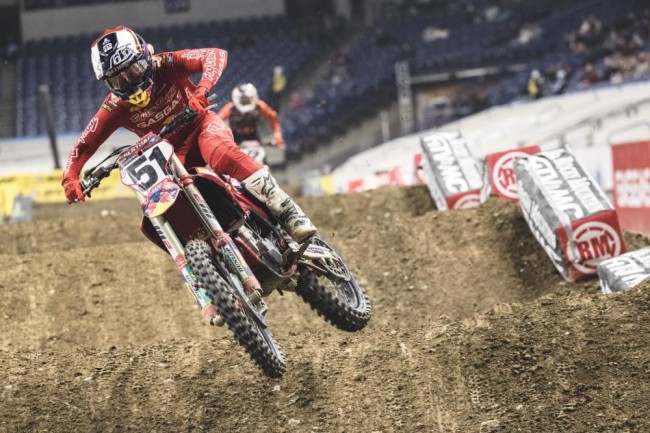 After enjoying an incredibly successful result in Indianapolis just three days ago, the Troy Lee Designs/Red Bull/GASGAS Factory Racing team returned to Lucas Oil Stadium for the final time on Saturday but it was a mixed day this time around. Justin Barcia delivered top-notch results all day starting with a season-best fifth in qualifying, a heat race victory and a Main Event holeshot that led to a podium finish within grasp before losing it all when another rider collided into him mid-air leaving him to salvage 19th.

Coming into Saturday, the Troy Lee Designs/Red Bull/GASGAS Factory Racing team made some changes to Barcia’s bike setup which seemingly paid off as he rode his MC 450F to a season-best fifth in qualifying. In the heat, Barcia jumped into a top-three position off the start and it wasn’t long before he found second. He kept a good pace behind the leader, Marvin Musquin, and he pounced on the chance to take over when Musquin made a mistake, leading the last six laps to claim the heat race win.

In the Main Event, Barcia proved he was hungry right off the start as he clawed his way across the line to the claim the holeshot. He diced up front early on before settling into a solid rhythm in second. He went back-and-forth with Cooper Webb, who finally got around him for second later in the race, only to then fend off defending champ, Eli Tomac, seconds later. Barcia shut down that attempt and staked his claim on third heading into the final laps. With a podium finish in sight, Barcia got tangled up with another rider mid-air and went down hard with only three laps to go. He was able to dust himself off and take the checkered flag in 19th, salvaging a few valuable points toward the overall championship.

Barcia: “The day was going good, I had my best qualifying position with fifth and I felt like we got the bike working really well and I felt really comfortable out there. The Main Event was going good, I was battling for the podium and unfortunately had a lapper come across on me and take me out and that’s pretty much how the night ended. It’s pretty disappointing but onto the next one.”