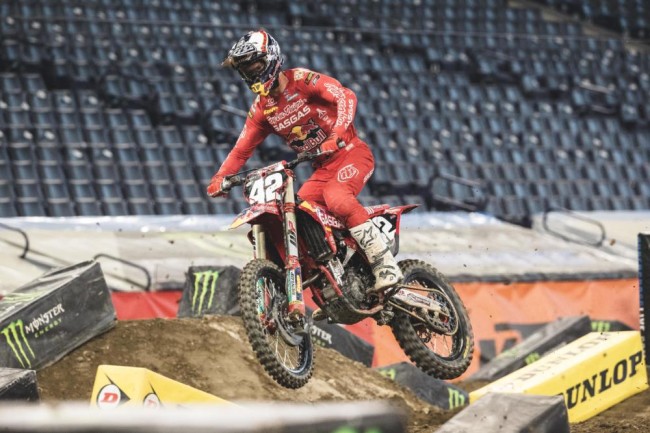 Michael Mosiman was poised to have another great night as well, grabbing third in qualifying before suffering a broken hand in the final qualifying session of the day.

Coming off two consecutive podium finishes in the 250SX Eastern division, Michael Mosiman’s championship run came to an abrupt halt at Round 6 when he sustained a broken hand at the end of the day’s final practice session. Prior to getting injured Mosiman was in the mix fighting for pole position, ultimately qualifying third overall despite not being able to line up for the night’s racing. The next step for Mosiman will be surgery to repair his broken hand.

Mosiman: “I made a stupid move at the end of the last practice and I seem to have broken my hand in three places. I qualified third was riding great, looking to get my first win here tonight but looks like it’s going to need surgery so we’re going to do the work necessary and be back out there to battle with the guys. I’m super bummed and disappointed. Thanks to everyone sticking behind me and supporting me, we will be back.”