A frustrated Ferrandis, plus Stewart and Plessinger on Orlando 2 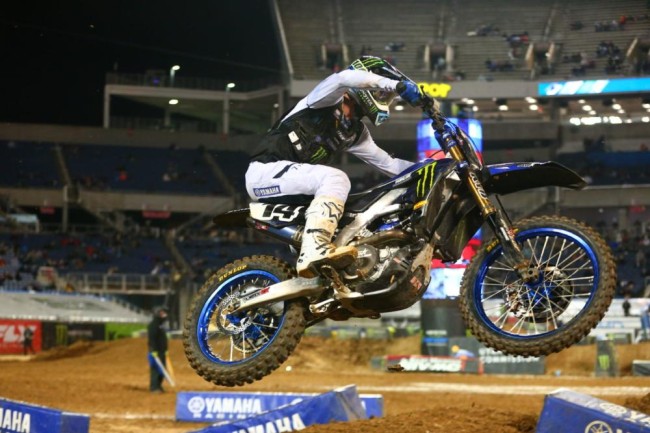 Monster Energy Star Yamaha Racing’s Malcolm Stewart and Aaron Plessinger crossed the line seventh and ninth, respectively, at the final round of the Monster Energy AMA Supercross doubleheader in Orlando, Florida. Their rookie teammate Dylan Ferrandis fought his way back from adversity to finish 11th.

Both Stewart and Plessinger struggled early on the hard-packed track but the team made some changes to improve their results for the heat race. Plessinger got off to a good start and finished third, while his teammate from Haines City, Florida, worked his way from 10th to fifth. In the Main Event, Stewart got the better start and quickly moved into the top-five. After a few big moments in the challenging conditions, he focused on keeping it on two wheels and ended the night seventh. Back in 14th, Plessinger put his head down and tried to pull off a repeat performance of Orlando 1’s charge through the pack to sixth but had to settle for ninth.

Ferrandis came out swinging straight away and topped the timesheets in the first practice session, ultimately qualifying third. Unfortunately, it was another tough night at the Camping World Stadium for the Frenchman, which started with an eighth-place finish in his heat. He got a decent launch from his less than ideal gate pick and started to work his way forward to seventh, but hit a tough block four laps into the race and had to pull into the mechanics’ area. The team got him back in the race, but he found himself rejoining at the end of the field just in front of the leaders. Undeterred, Ferrandis put his head down and set a blistering pace, pulling away from the frontrunners and finishing just outside the top 10 in 11th.

The Monster Energy Star Yamaha Racing 450 team gets a weekend off before Round 9 of the Monster Energy AMA Supercross Championship at Daytona International Speedway in Daytona Beach, Florida, on Saturday, March 6.

Malcolm Stewart: “We struggled in practice and made a few changes and got the bike really good for the heat race. The heat race was great, but I didn’t get the best start. My starts have been struggling a little bit all year long. Even in the Main Event, I didn’t get the best of starts, but I still made some passes on the first lap and put myself in a great position. Then I had a couple of sketchy moments on the track. I landed on a hay bale. I tried to do a quad and landed on a hay bale again. You know how people say cats got nine lives? I think I used every bit of those nine lives out there. It’s just one of those deals when the track goes away, and there are potholes, and the whoops are kind of sketchy. It turns into more about survival mode out there.

“We ended Orlando 2 in seventh. The way practice went, we turned this whole day all the way around. Hats off to my guys. They have been busting their tails all year long, the whole team. I’m looking forward to the week off. We’re going to do some more testing and start swinging for Daytona. That’s another hometown race for me, so I’m excited for that – three hometown races. Let’s just keep the ball rolling.”

Aaron Plessinger: “It was a so-so day. I started out not feeling comfortable in qualifying. We made some changes, and then we decided to go back to what I ran here last weekend. That was better in the heat race. I got a really good start and was up there in fourth and then passed (Broc) Tickle for third. I think I messed up on my gate selection and didn’t pick the right one, and did not get a great start in the main. I put my head down and tried to do what I did last weekend but only came back to ninth.

“The track was like glass out there, like wet glass. I went around one corner, and I barely even leaned over, and my back end almost spun around all the way on me. It was so hard-packed and so rough. The whoops were so edgy and slick and blue grooved. It was crazy. It was worse than the test tracks. So ninth on the night, I can’t be too mad, being that this class is as stacked as it is. It’s not where I want to be, though. I want to be up front and battling for that top spot, the top three spots at least. I know we can get there. Last year we had a pretty good race in Daytona, so I’m going to get back on my horse and ride on.”

Dylan Ferrandis: “It was a tough two races in Orlando. I am not happy, but I gave everything I had to come back after hitting the tough block and losing a lot of time in the race. I’m happy to have the weekend off to do more work and get ready for Daytona.”

Jeremy Coker: “Unfortunately, our results at the end of the night did not show how well our day went. It started off great with Dylan P1 in practice and qualifying third overall. We made huge improvements, but our starts still aren’t quite there in the Main Event. We’ve got to get better. It was a bummer Dylan had bent his shifter on one of the tough blocks. When he got back on track, he was in front of the leaders and was consistently faster to pull away from them. So we know we can do it. We’ve just got to get better starts.”