Stewart picks Dungey for the US outdoor title! 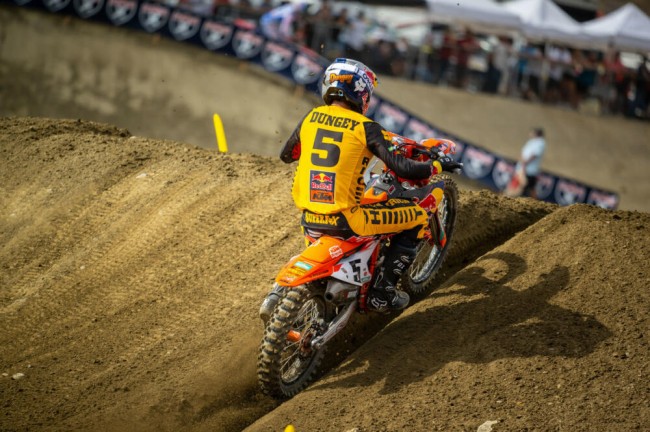 After seeing a brilliant return to action for Ryan Dungey after five years away, James Stewart is picking him for the title – and loves how the 32 year old sits down so much!

“I’m picking him for the the title,” said an emphatic Stewart in the latest Bubba’s World. “I’m picking him because he hasn’t raced in five years and he had podium speed. I think if we were round three he would have got a podium. I think the fact he has so much pressure on him, he is carrying the KTM flag, he just comes back in after that huge lay-off on a rough track, when you look at Ryan, his past history and what made him so tough from his riding style from the way he is I think it just sets up that he’s going to be there.”

Stewart also said he likes the fact Dungey sits down a lot, despite Stewart getting passed by Everts with the Belgian keeping his feet on the pegs around a rutted turn at Matterley at the MXoN in 2006 as Stewart sat on the seat!

The contrast in the two all-time greats theory on riding a bike is clear (and maybe US and MXGP riding styles in general) with what Bubba says next: “The way he rides, compared to everybody else, what makes Ryan so consistent and smooth is, he sits down a lot – it’s not a lazy sit down. When you watch him compared to Chase, and a lot of guys, he takes out a lot of potential high sides and front end wash outs, and I think that’s what made him consistent over his career. (It’s) not only his mindset but the way he rides, when you watch him you don’t ever feel nervous that the guy would go down.”

Interestingly, Chase Sexton told Gatedrop at a supercross press conference a few weeks ago, when we asked what he learnt working with James, that Stewart tried to get him to suit down more! Sexton said: “Working with James last year was cool. He taught me some stuff. I used to stand up a lot more. I used to stand up pretty much all around the track. So, I learned how to sit down a little bit, especially in supercross, and learn how to plant the bike a little better.”

Watching Liam Everts ride, it is clear Stefan still values the standing up technique and that was something hammered home by Harry Everts when I watched a riding school he took in 2005, who felt it gave you more leverage over the machine. The Everts family are big proponents of feet on the pegs but the contrast between both is fascinating and each philosophy has won major titles for both with Everts winning a record ten world titles and Stewart two 450 supercross titles, a 24-0 450 outdoor title and two 125 National titles.

Stewart also says he loves the fact Cairoli is racing in the US but isn’t all in like Dungey is for the series: “When I watch Tony, I’m so happy to see him here racing, I feel like it’s a rental car (his time at KTM USA), he’s going to use that for a couple of times, to go to Universal, Disney then go back home. Ryan I think he might actually buy a place in Disney world.”

Watch the whole podcast below: