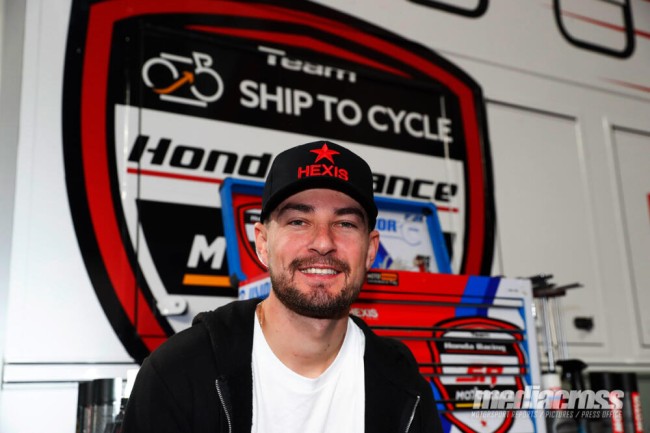 As soon as the MX season was over Stephen Rubini underwent a successful knee surgery, and it was a pleasure for team Ship To Cycle Honda Motoblouz SR to meet him as a guest at the Paris Supercross. Stephen was happy to be back in a paddock, and gives us some good news about his recovery.

It’s always difficult for a pro rider to be inactive, even if he doesn’t spend hours in a sofa watching films or videos. But when you are used to be on a bike or a bicycle every day, it’s not that fun to work in a rehabilitation room.

“I underwent surgery just a few weeks ago, but I really feel great. Mentally I can’t say that I was Ok after the surgery, as I came walking and left the hospital with two crutches! But the progress has been good, we did a good job at the rehabilitation center in La Ciotat, I am very happy with the work we did there. I have just completed a six-week rehabilitation, and I will now be able to return to Uzès to begin winter preparation alongside Yves Demaria,” says Stephen ,who knows that he will have to work step by step.

“At the moment I can’t ride a bike, I can’t run, and I must avoid any shock on my knee so we will do mainly cycling and muscle building. We’ll work on the physical shape with the goal to jump on the bike in January if everything goes well.”

During the season both Stephen and the team didn’t give details about this injury, who was really painful for Stephen in the second part of the season.

“In fact I had a knee injury eight years ago, but as I was growing the doctors didn’t want to do an operation. I had to deal with this injury but in May I hit again my knee, which really bothered me for the second part of the season. During the operation the surgeon also detected a hole of one square centimeter in a cartilage, so it was time for me to have surgery,” continues Stephen who will do another season with team Ship To Cycle Honda Motoblouz SR, but on a 450.

“If everything goes as planed, I will have a little more than two months to prepare this first season on a 450; the season starts pretty late and that’s a chance, as moving to the main class is a big step and it’s necessary to be at 100% and in good shape to start the season. Then the goal will be to give everything and to avoid mistakes to reach our common goals with the team.”