Sexton on working with Stewart – a really big help! 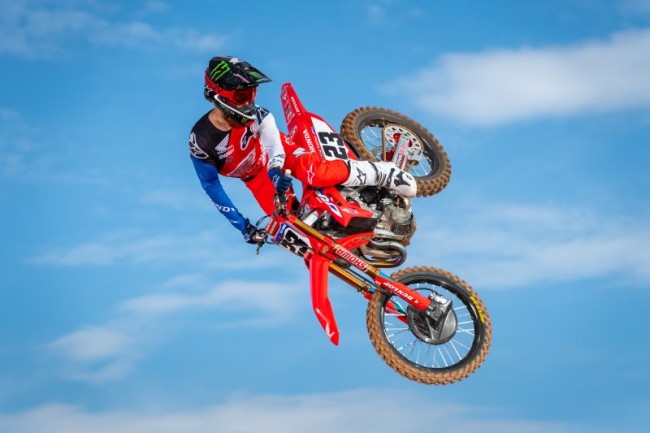 two-time 250 east coast champion, Chase Sexton, is excited and confident coming into the 450 class and expects to win races in his rookie season!

For me the first year going into the 450 class is going to be exciting, I have been dreaming of this since I was a little kid,” said the factory HRC Honda rider on living his dream life. “I would say my biggest strength overall…my speed has always been super good, one part of the track I feel like I have always been good at is the whoops. For a 450 rider going to a new class. the whoops are a lot different on the 450 and trying to manhandle the bike -luckily I am a pretty big kid. I am really excited to go racing, obviously like all the guys said, we have done a lot of work. I am super excited, it’s been a good off-season and had a few changes in my circle and we are in a fun spot coming into Houston and we will see where we are at.”

“It’s hard to really set a real expectation,” he continued on where he sees himself fitting in during his rookie year in the premier class. “This is a new class for me but having that outdoor series I know it’s different but supercross has always been really fun for me I feel like I have excelled for me I feel I have the potential to win races and be on the podium and for me being consistent and being i n the top 5 a lot is my goal. It’s a long series, 17 races I have never done that length before, I want to contend for wins, I feel like that’s what I’m capable of, at the end of that’s why I wake up and train my butt off for is to win and be competing up there towards the front. It’s going to be a fun series with so many fast guys and I just want to get out there and get off to a good start, stay consistent and ultimately win races.

On working with James Stewart, Sexton conceded that it brings extra attention and that James is brutally honest but the legendary Stewart is proving to be a big help.

“It’s not so much pressure, but James does draw a lot of attention, (but) for me he has been a really big help so far,” acknowledged Sexton who first started working with Stewart outdoors last season. “Bike set-up is a big thing in 450 class compared to 250s, it’s a lot harder to set the bike up. For him doing it so long, he has helped me a lot with that and has probably played the biggest role I being able to set my bike. He is pretty brutally honest, he kind of calls it how it is, he sees me ride every day, he knows where these guys are at, obviously he has raced most of them. I’m excited, he will be at Houston and we will take it race by race.”