Roczen: I have just changed my complete outlook 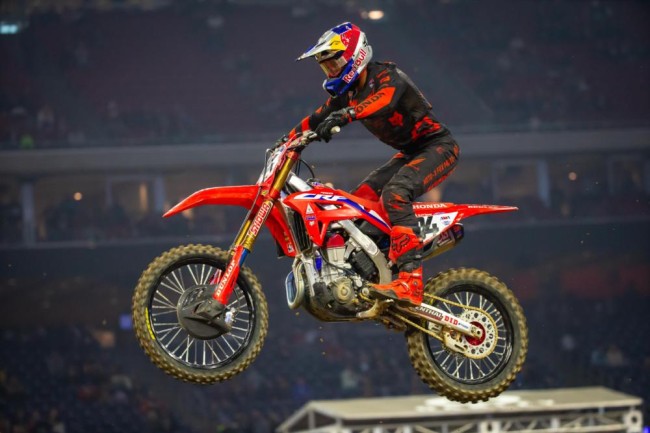 A happy and chatty Ken Roczen was nothing but positive in the post-race press conference following an excellent display in Houston that saw him pushing Justin Barcia all the way in a smart and very comfortable looking debut on the new Honda to take second place – despite not racing for six months.

“Really good,” assessed Roczen on his night. “It really feels like it’s been forever since I’ve raced since I didn’t ride outdoors. This race thought was the most normal race, Salt Lake did not feel normal whatsoever, coming here and having some fans in the stadium, it had the sense of the “good ol’days” let’s put it that way even thought we are not quite completely there yet.

I just had fun out there, it felt like we were in the middle of the season to be honest. Finishing the first race in second again, I think I did the same thing in 2019. It’s just really good I think there was a lot of madness going on behind us and it was nice to stay away from that. I have just changed my complete outlook on the whole racing side of things I jus tried to race the day and enjoy myself and that’s exactly what I’ve done so I am really over the moon with myself.

On his different off-season Roczen said: “My off-season was super mellow and low stress. Meaning not surrounded by a whole lot of riders and a lot of activity and having a stop watch race every single day, and I think that helped me. Since I didn’t race outdoors I took quite a bit of time to come back from that it just takes time. As racer it is really difficult, you tend to go back to practicing and you want to be good right away, and then, ‘why are the other guys so good,’ and your not and then you get winded right away, which is all completely normal. That is the whole point of letting your body rest and then you build yourself up all the way to the first race. There was no freak outs. I did a lot of different work this year compared to past years, a different structure and learning a lot of new stuff and I think overall, it’s paying off. All I want to do is enjoy myself out there and that’s what I did.”

While it looked like he could have made the move and on Barcia and potential won the race such was the ease with Roczen appeared to be riding the pace in second, the German admitted he felt it wasn’t a risk worth taking at round one: “You have to pick your battles. When the ruts get deep and they are tacky like that, to make a block pass right there, you don’t want contact but sometimes it just happens and being in ruts like that, if we both go down then we are both going to go down and we will both be mad – it doesn’t really help us. I was just trying to pick my battles.

“If I felt I had the edge on that, I felt I would have made it happen but it just one of those things. He was really high in the ruts, almost at the very top rut and I would come in at such a step angle and for me to make that pass I would have to take his line away. If he doesn’t expect it, and he slows down or I clip his front wheel or whatever, especially being in the ruts, we would both do down. That’s how I thought of it, could you have made it happen? Probably, but at the same time I was just picking my battles,” concluded the German who looks the best he has on the bike since that dreadful 2017 crash.