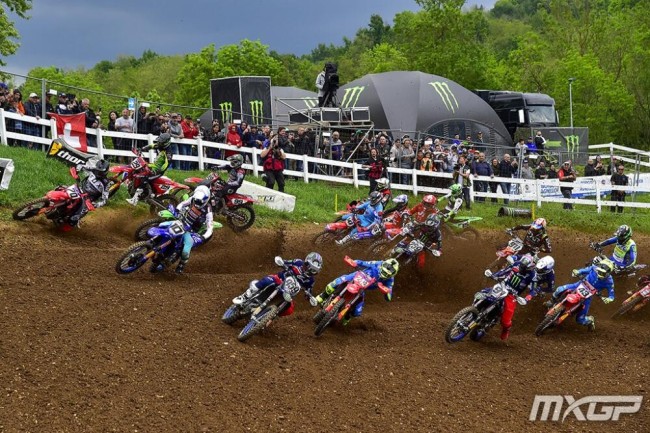 An exciting race one in the Maggiora ruts and then a mid-race shower, made things tricky for the best riders in the world, but in the end it was Tim Gajser who got the job done despite having to throw his goggles away late in the race.

Calvin Vlaanderen took the holeshot and led Renaux and Gajser for a few strong laps in the first half of the race. But Renaux eventually found his way past, as did Gajser, who then put the pressure back on Renaux but it was only with eight minutes to do that Gajser used a beautiful line to pass the Frenchman, a line Gajer admitted he had been working on all race long to prepare for the pass – smart man!

Jeremy Seewer came on strong late in the race to pass Jonass, Vlaanderen and then Renaux for second but it was looking like an exciting last lap as Renaux put the pressure back on Seewer until Renaux went down and ultimately took third.

Moto two was a Tim Gajser riding clinic. The Slovenian didn’t even get the best start, coming out of turn one just inside the top ten, but a couple of turns and brilliant decisions later Gajser was third and had passed his closest rivals Seewer and Renaux. Tim isn’t just faster, he’s smarter as well.

Gajser then passed Ben Watson, who took a rare holeshot, then took the lead with a pass on Jonass to win by over 10 seconds in a class display.

Seewer got himself into second with Renaux getting third after a late race pass on Ben Watson who really showed what he could do on the 450 Kawasaki in the best ride of a tough season.

Gajser said: “I was enjoying a lot, the track developed really nice, I couldn’t be happier. This year the bike is unbelievable and also myself – I’m feeling really great.”