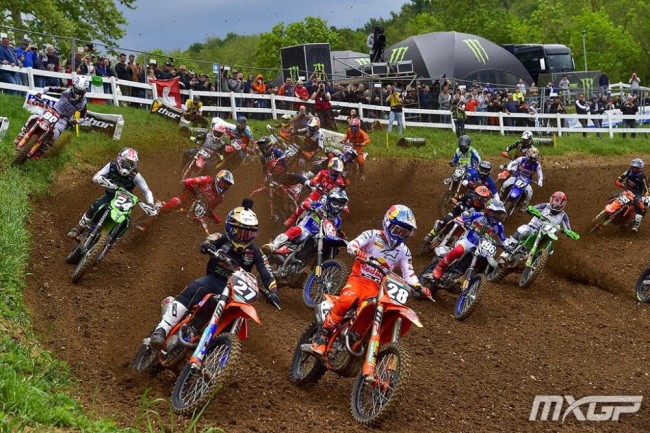 On a very rutted track after the overnight rain, the first MX2 moto was carnage from the beginning as leader Guadagnini got too excited at his home race and crashed in turn two and took out Vialle when he got cross-rutted!

That left Geerts in the lead who controlled the race despite a bit of pressure from Stephen Rubini to take the win while Vialle scrambled through the field minus goggles at the end to take fifth behind a career best fourth for Liam Everts after Kay de Wolf crashed out of fourth late on and ended up ninth.

Moto two came down to another classic Vialle/Geerts duel with the Belgian whittling down a six second gap once he got into second passing an impressive Karsemakkers when the young dutchman tipped over. Geerts showed he had the pace on Vialle but Vialle showed he had the composure under extreme pressure to hold on for the win in what would have been a six point swing if Geerts found his way by.

Geerts now goes into Riola next week with a slender 6 point lead but it was another impressive day from the Belgian.

Simon Laegenfelder took third in race two but was 35 seconds behind at the finish such was the pace of the fastest two 250 riders in the world. Third overall however was denied for Laegenfelder by Stephen Rubini who, with sixth in a frantic race two, that saw a five-way battle for fourth, won by de Wolf got himself on the box in a pair of great rides. Kay Karssemakers eventually ended up ninth but he held fourth for the majority of the race in a fantastic ride for the teenager to take tenth overall in his rookie season, straight off a 125!