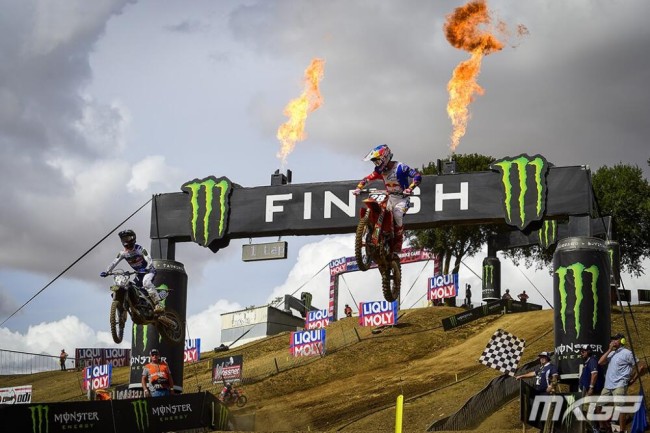 Title tension! It was a day of who could handle the pressure at the overly prepped St. Jean d’Angely and with two crashes in race two, it was Jago Geerts who failed to deliver as Tom Vialle executed the start in race two to win the overall with a 2-1 scoreline on a huge day for the MX2 title chase that gives Vialle control of his own destiny.

Vialle is now only 2 points behind Geerts with one round remaining in Turkey and both riders have it in their own hands but Geerts will be gutted. He was arguably fastest in race one but terrible track prep with too many unnecessary ruts meant it was hard to make a pass and Benistant led from Vialle and Geerts all race long with all three nose to tail but no passes made.

Race two and Geerts started sixth as the ice cold Vialle took a vital holeshot and staved off the pressure early from a determined Thibault Benistant to pull away to the tune of ten seconds. This was a champion rising to the pressure and doing what he had to do when he had to do it.

Geerts could see Vialle getting away and had just moved into fourth passed Van de Moosdijk with Benistant and Guyon in his sights when he went down, remounting in seventh before crashing again trying to catch Horgmo for sixth. Geerts will need to recover mentally very quickly to be ready to deliver under the biggest pressure of his career in Turkey after crashing in three of the last four motos. This is a test of the mind more than speed now.

Tom Guyon had the best day of his career with a third place in race two making it a French 1-2-3 in the moto for fourth overall – and none of them are riding MX2 at the MXoN!

Vialle said: “It was a good day. The fans are incredible they pushed me a lot. I was feeling so good on the bike in the second moto. I really wanted to win this GP it was my last one in France before I go to US.”

Geerts said: “Just had two pretty bad starts. My riding was okay but I had to take too many risks to pass the guys. I will work hard the next two weeks and try to finish on a high.”

Everthing changed in the final lap of a pulsating second MXGP moto that had five riders nose to tail at the front mid-way through a very intense moto! Jorge Prado had the holeshot and led every lap except the crucial last half of the final lap as Tim Gajser passed Seewer and then Prado on a sensational final circulation to deprive Prado of the race win and first race winner Seewer the overall win as the five time world champ stole the GP victory with last lap brilliance.

A delighted Gajser said: “Waow! Even me, I was not expecting that! I knew I had to win to win the overall. I felt I was faster but could not find my way around, then the last lap I decided to go for it try different lines, inside Seewer and jumping passed Prado. I sent it.”

Prado hung his head in exhausted frustration but a 4-2 was more like the real Jorge Prado with the Spaniard revealing he has not been riding during the week since Lommel due to illness but is finally feeling better and hoping to get some bike time before Turkey.

A happy but also regretful Prado said: “Just half a lap! knew I was struggling on the downhill. It’s from Lommel I cannot ride a bike (illness). I was in a hole. Hopefully I can do training this week. I was leading the whole race – just half a lap. Hopefully we can get that half a lap in Turkey.”

While a measured Seewer admitted he was a bit unlucky that the last lap drama robbed him of a GP win despite riding so well all day.