Mosiman and Barcia on Indianapolis 1 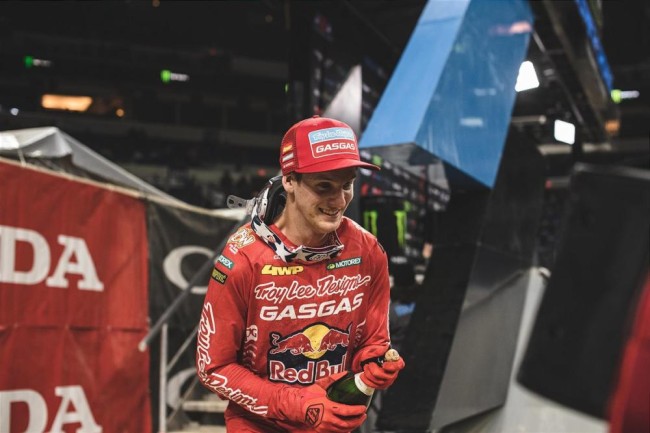 Troy Lee Designs/Red Bull/GASGAS Factory Racing’s Michael Mosiman took a big leap in confidence and championship points following an impressive all-around performance at the fourth round of the 2021 AMA Supercross Championship in Indianapolis, Indiana. From start to finish, Mosiman kept his MC 250F in the spotlight with a top-three in qualifying, a heat race win and a runner-up finish in the 250SX East Main Event. It wasn’t a stand-out night for teammate Justin Barcia in the 450SX class but the round one winner has plenty more gas in the tank as he gears up for the next opportunity to shine in just a few short days.

Round 4 brought fresh vibes to the Troy Lee Designs/Red Bull/GASGAS Factory Racing squad, with everything from snowy winter weather to an all-new race track and dirt inside Lucas Oil Stadium. For Mosiman, it was everything he needed to elevate his MC 250F to a season-best performance and he did it from the start with a third-place qualifying position early on. He carried that momentum into the night show where he got off to a second-place start in the heat race, charging to the front on lap two. He led the remaining eight laps to capture his second heat-race win of the season in convincing fashion.

In the Main Event, Mosiman immediately inserted himself into the mix up front, settling into third off the start. For a majority of the race, he trailed the series points leaders from third and held his own in the fast-paced battle. Lapped traffic came into play towards the end of the race and Mosiman ended up losing his podium position amid the congestion, but he kept his calm and earned it back when the two riders ahead made a mistake together, giving him the chance to drive it home for a season-best second-place finish.

Mosiman: “It was a great night. I got off to a better start this time and I was right there with those guys. I haven’t been able to see those Star Racing guys a lot this year so it was really nice to catch a wheel and ride with them. We got into some really bad lapped traffic – guys who were all in a battle – so it was tricky out there and honestly I have some things I need to work on still but that pace isn’t crazy – it’s not out of my reach – and we’ll have a go at it again on Tuesday.”

For Barcia, getting used to the new track proved to be more of a challenge this time around as he spent the practice and qualifying sessions searching for a flow. He didn’t get off to the best start in the heat race, grabbing ahold of 10th on the first lap. He piloted his MC 450F up to sixth early on, with sixth-place all but wrapped up heading into the final turns. The fierce competitor that he is, Barcia went for a last-minute attempt at fifth and came up just short with a small crash and a sixth-place transfer into the main.

In the Main Event, Barcia pulled off a top-five start from the inside gate but he got tangled up with another rider and went down in the second turn. With a big charge early on, he broke into the top-11 and started clicking off solid laps. He made a couple mistakes and went down, costing him significant momentum late in the race. Finishing 13th on the night, Barcia is ready to keep moving forward as he looks to rebound in just a few short days.

Barcia: “I would say tonight was my most difficult night so far. My speed was good and my riding was okay but it just wasn’t what I needed tonight to be up front. We’ll regroup here in Indy and get back at it on Tuesday. I just need to put it all together.”

The Troy Lee Designs/Red Bull/GASGAS Factory Racing Team will continue its week-long residency in Indianapolis with round five on Tuesday.