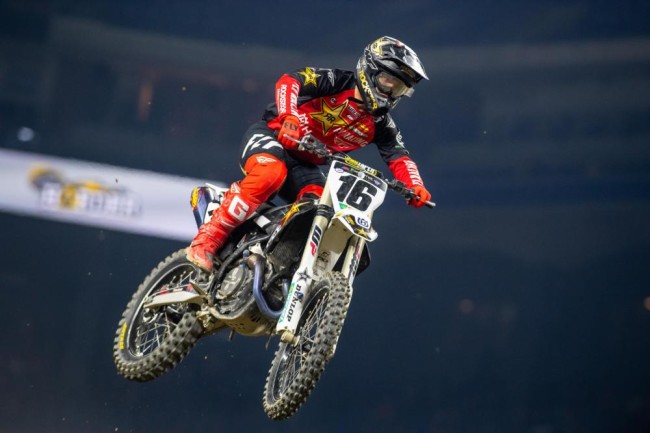 Rockstar Energy Husqvarna Factory Racing’s Zach Osborne overcame the challenges of a tough night in Indianapolis where he rallied from a last-place start to a top-five finish in the 450SX class with an impressive Main Event charge at Round 4 of the 2021 AMA Supercross World Championship at Lucas Oil Stadium.

Osborne put himself in a favorable position heading into the racing program, securing third overall in qualifying. Lining up in 450SX Heat 2, Osborne shot off the line to overtake second early on, where he locked in a second-place transfer into the Main Event. Eager and ready to go for the Main Event, Osborne took off a little too early and hit the gate, leaving him at a standstill as the rest of the field took off down the start-straight. He quickly got himself going and made a charge up to 12th by the end of lap one, latching onto his teammate Anderson to climb through the pack in an intense battle of their own. Osborne eventually got past Anderson on lap 16 and that’s when he ignited a major push to bring himself into podium contention heading into the final laps. Sitting in fifth, Osborne had the third-place battle within his sights but he ran out of time before making a move, ultimately securing an impressive fifth-place.

“I had a pretty decent night,” Osborne said. “I got a second place in my heat race and qualified third from the day, so that was solid. In the Main Event, I went a little too early and hit the gate. I pulled it back and set my sights on getting far as I could, and I was able to make it all the way up to fifth. It was a solid night and solid result considering all of the challenges.”

Anderson got a seventh-place start in 450SX Heat 2 and he worked his way into sixth on lap five. He went down a few laps later and dropped back to 10th, narrowly missing the Main Event by one transfer spot. In the last chance qualifier, Anderson grabbed a fourth-place start and charged into the lead two laps in. From there, he rode strong to secure the LCQ victory and a spot in the Main Event. Anderson made the most out of a tough gate choice as he put himself into a top-10 position off the start in the Main Event. He held off his teammate Osborne for the first 15 laps as they pushed each other to climb through the pack. Battling between seventh and eighth place, Anderson ultimately finished strong with seventh.

“It was better than last weekend, I am trying to get better as the weekends go on,” Anderson said. “I got my first W of the season in the LCQ and just going to try to build off that and keep moving forward.”

It was a tough ending to the night for Dean Wilson, who came into Saturday’s race day all banged up after suffering a practice crash during the week. He attempted to practice earlier in the day but ultimately made the tough decision to pull out of the night program due to injuries sustained in his knee, ankle and foot.

Team rider RJ Hampshire also didn’t line up at Round 4 due to hand injuries sustained during a crash in last Saturday’s free practice in Houston. Hampshire underwent surgery on Wednesday to repair ligaments in his left hand.