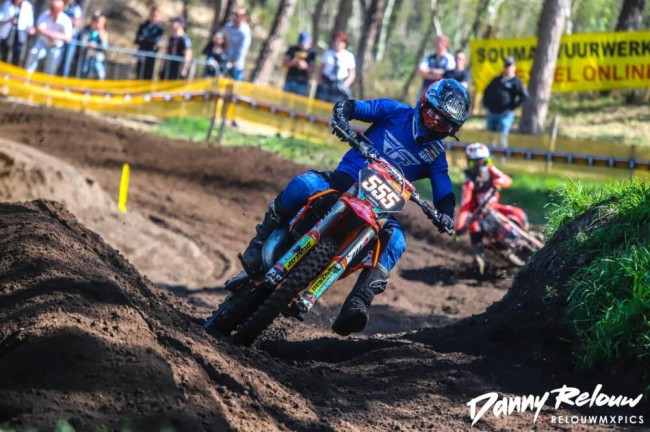 Cole McCullough bizarrely got disqualified from the second moto of the 125cc Dutch Masters which took place on Easter Monday. The 13-year-old commented on the matter, here.

The KNMV have been in touch with us and have asked us to publish a statement on their behalf which is as follows:

“This matter was notified by the technical officials which mentioned it to the race director. To me, urinating on the track, not using the facilities which is meant to be used, is a DSQ. If one of his team (dad or mechanic) is saying that he sometimes is having a bit of trouble to pee, this then makes the story of the rider less believable. If you would disagree, there is always the solution/possibility to talk to the race director and explain what happened from their side. This has not happened. We can also make mistakes, and for sure we checked with the technical guys if they seen the matter correctly – yes or no. If it really is as Cole says, he should absolutely not be disqualified”, the KNMV stated.

Cole’s father, Philip has responded to the statement above as follows:

“I can guarantee 100% that Cole did not urinate or pee on the track or holding paddock. I wasn’t able to find the race director before we left the circuit to ask about his disqualification. It seemed a very harsh penalty for something that never happened, if he had been found urinating on the track or in the holding paddock I would have to accept the penalty as it goes against the rules of the federation, just because he opened his race trousers doesn’t mean he did, so I believe the technical official concerned was wrong and the decision of the race director, who did not investigate the incident, or approach Cole to ask him any questions regarding it, was wrong also. However, the Dutch Masters Championship is for sure one of the best series we have rode at and we will continue to compete in it”.

Now that both sides have had their say on the matter hopefully a line can be drawn and both sides can now move on from the matter.

At the end of the day, McCullough is a 13-year-old making his first strides competing outside the UK which is great to see so hopefully he can continue to develop and have a great career ahead of him – it would be great to see him continuing to race in the Netherlands.