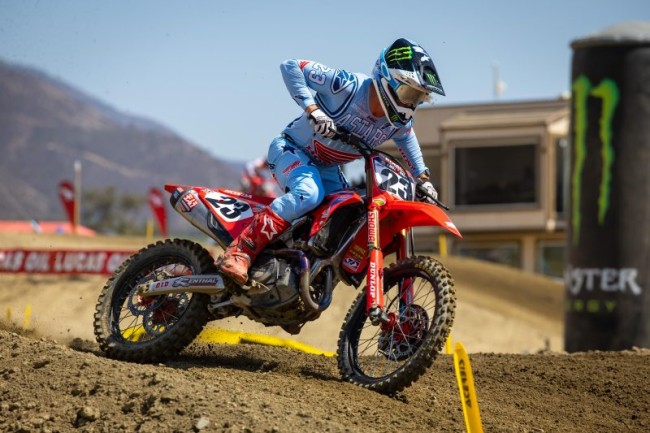 Team Honda HRC finished an incredible 2022 AMA Pro Motocross season on a sweltering day at Southern California’s Fox Raceway, where Jett Lawrence earned the 250 overall win and successfully defended his national championship, while Chase Sexton ended up second overall in the 450 class, falling just short of taking the premier-class crown. With a fourth-place overall finish, Hunter Lawrence took third in the final 250 points for the second year in a row, while crashes held Ken Roczen to ninth overall in the 450 division, although the German was still a commendable fourth on the year. The final round also served as the pro debut for Team Honda HRC’s Chance Hymas, who was 15th overall in the 250 class.

The first 250 moto saw Jett snare the holeshot and lead every lap, though he slowed in the middle part of the race in an attempt to assist Hunter, who was running third. Contact by Hunter caused Jo Shimoda to go down, and Hunter finished second in the moto. Meanwhile, Hymas had gone down off the start, and he remounted in last place but was able to climb to 20th. Jett completed the first lap of moto 2 in fourth place, and although he was up to second before the midway point, Shimoda was too far ahead for him to catch. Hunter was playing catchup after a poor start, and he climbed to fifth by the finish. Hymas advanced from 14th on lap 1 to 11th at the checkered flag.

Sexton took the holeshot in the first 450 moto and led until being overtaken by Tomac five laps from the end. Although Sexton challenged to retake the lead, he ultimately had to settle for second, while a start crash contributed to Roczen finishing eighth. Moto 2 had Sexton running in third on lap 1, but due to three unfortunate falls, he slipped back to eighth in the early going. He regrouped and charged forward again, turning impressive lap times on his way to a second-place finish. Another start crash contributed to a 13th-place finish for Roczen.

Sexton: “It was a tough day for me. I led the first moto and felt like I rode really well, and even if Eli [Tomac] got the better of me, I left it all out there. I got a bad start in the second moto and made my way up; I had a few falls but never gave up. It was a good building year for me; I made a lot of progress, and it’s definitely the best I’ve ever ridden. We can build off this and go into next year. Not winning definitely stings today, but we’ll use it for motivation, have a good off-season and come back swinging next year.

Roczen: “This weekend, everything was very unique; the weather was obviously super-hot, and I had really bad luck. I went down in the first turn in both motos. The second one took me a while and really knocked the wind out of my sales; I’m kind of banged and bruised up everywhere. I was really far behind the whole field, so I just rode the best I could; I didn’t want to miss the second moto like in the last round last year. I’m kind of glad this one’s over. I’ll regroup, reset and try and charge forward in the off-season.”

Jett Lawrence: It was a good day. I’m just glad it wasn’t like last year’s last round, as I didn’t hit the ground much. I qualified in P1, and in the first moto I ended up going with the Dunlop paddle tire to get that drive in the deep stuff. I got a really good jump and got the holeshot, which made my life easier. I tried to play around with Jo [Shimoda] a little bit, hoping that Hunter would catch up; I could see him in the background. In the second one I had the paddle again, and it helped me a lot. I was banging bars with Seth Hammaker coming out of the gate, but I still really pulled. I tried to get into second as quick as I could, but Jo just put on the boost and was out of there; he rode good. It’s awesome to get it done back-to-back, and I’m definitely grateful. The team has been awesome this year.”

Hunter Lawrence: “This is not how we wanted to finish it. Obviously, we had a few unfortunate races along the way that put us in this position, but it’s better than last year. I’m bummed with how it ended, but Jett and Jo rode great. I’ve got to be better.”

Lars Lindstrom: “This is not how we wanted to finish it. Obviously, we had a few unfortunate races along the way that put us in this position, but it’s better than last year. I’m bummed with how it ended, but Jett and Jo rode great. I’ve got to be better.”