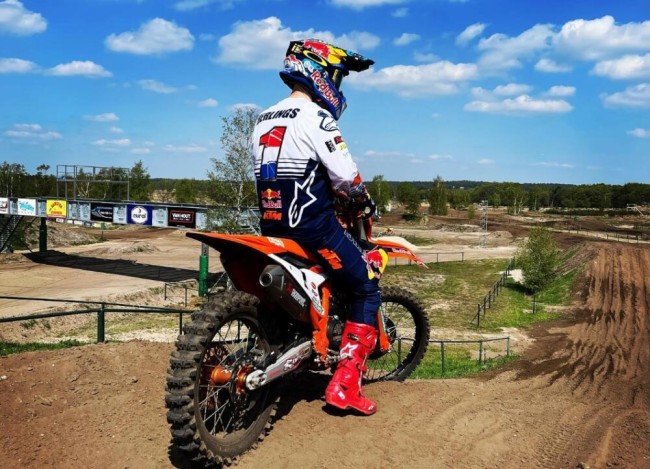 After making the tough decision to skip the 2022 season after needing more surgeries on both his ankle and his old foot injury, Jeffrey Herlings, who was reportedly flying when he tested the bike earlier this week, says he still wants to race AMA motocross in the future and that the “old man” still has the raw speed after his test day and still loves riding his dirt bike!

But it is clear the smarter and long term choice for the longevity of has career (already 12 years in ) has been made even if it is a painful wait for the duthcman, who had the chance to go for an AMA title and the MXGP win record this year if his ankle and foot had healed properly! But on the positive side, maybe a year off might extend Herlings career, especially if it gives him the time to get healed, mentally rest after a gruelling career so far, and, finally ride pain free again.

A deeply frustrated Herlings said: “I wish the situation was not like this and it’s so frustrating that my career keeps throwing things at me! I’ve been recovering from the injury but the condition of my foot – because of some old problems – means it is not in the best shape and not enough to think about racing at the highest level this summer. It’s a bummer not to run the #1 plate in MXGP or to think about the chance of doing the AMA Pro Nationals but we’ve made our decision and now my only goal is to get my body right, get pain-free and think about preparation for 2023.

“It feels like a long way away but I know it will also come quickly. Thanks to all my fans for the messages of support and of course to the best team in the sport. Red Bull KTM have always had my back and I’m really grateful they still do and to all my partners and sponsors involved. I had a wonderfull day on the bike yesterday, and this old man still has the raw speed, and I will show that once again next year.

And one day, I will race again at @promotocross , believe me.

While some top GP riders going to the US is always very cool and exciting to watch, can we get US riders to do the inverse – a year in MXGP? Unfortunately in the case of Eli Tomac, it won’t happen, with the champ telling us: “Not so much. I don’t think that’s on my things to do. Just concentrate on US supercross on motocross, I don’t see myself doing that.”

Clearly, there is still some work to do in MXGP to inspire Americans to dream of being world champ and value the MXGP world title as the pinnacle of motocross. AMA supercross/motocross still has that, “cool factor,” and visibility outside the USA thanks to great TV and media coverage by global websites and the far reaching US media. MXGP has to continue to break further into the US market and inspire the next generation of US riders to do a year or two in the world championship to show they are the best in the world.

MXGP needs to be seen and valued as what it is, the F1 of motocross, and in America, from the media to the riders, that generally isn’t how they portray the series, it’s more of a European National series to them and the US Nationals’ rival. Until that perception changes, more GP riders will want to experience the “cool” US racing that they have grown up watching and be based in California or Florida than the other way round and Americans coming to “Europe,” a series they don’t follow closely or value as a real world title and have to spend a winter riding sand in a cold Belgium.

It’s all perception based on exposure.