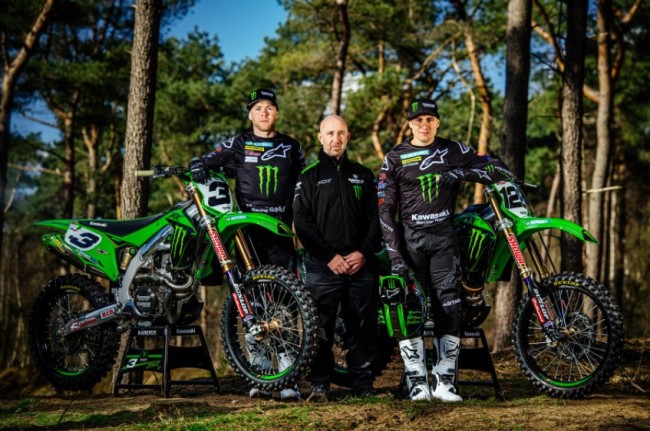 KRT technical manager Vincent Bereni joined the Monster Energy Kawasaki Racing Team in 2014 and is ready to enter the new MXGP season with a strong and experienced team.

Not so many technicians in the paddock have such a vast experience of racing on both sides of the Atlantic; for Vincent, who still divides his time between Europe and the USA, everything started near Le Mans, one of the most iconic venues for motorsport fans worldwide.

“My first job as a mechanic was in a team involved in Endurance and Supersport but after a few months I had the opportunity to work with Tony Bégué, a French motocross rider. Then I worked with Pascal Leuret, who raced the GPs, and later I joined the KTM factory and was the mechanic to Yves Demaria when he won his first world title,” he recalls. America was a dream for many French riders, and also for Vincent who had the opportunity to move to the USA after five seasons working in the FIM World Championship. “Everyone thinks that life is nice and easy in the US, but that’s not really the reality and you need to be strong to be successful there. I worked for several teams before joining Kawasaki Pro Circuit; I had four great seasons with Mitch Payton and his staff, but then I had the opportunity to take another career step with an Australian team where I had much more responsibilities than being just a mechanic.”

When this team retired from racing Vincent had acquired a wide experience and knowledge, and he joined Akira Technology, a French company involved in competition with several manufacturers including Kawasaki in both Superbike and Motocross. For the first time Vincent had the opportunity to work with KRT and, when Ryan Villopoto signed with the team to race the FIM MXGP World Championship, Thierry Chizat Suzzoni asked him to join the squad as he had the best profile to help Ryan in his new challenge. When former team manager François Lemariey retired from racing last winter, Vincent took on more responsibilities and he now shares team management duties with team owner Thierry Chizat Suzzoni.

“Just to be clear my main job continues to be as technical manager, working with our technical partners, with KHI in Japan, and being the team reference for the Japanese engineers,” explains Vincent, who now has several roles. “Honestly it’s a big challenge, the biggest of my life even if it’s not the first one. Thierry is supporting us a lot; he has been involved for many years with the team to represent Kawasaki at the highest level in MXGP. Personally I have the advantage to have managed the team technically for several years so that part is not new, but dealing with authorities such as Infront or the FIM and sponsors is new for me, even if I already had that relationship with the technical partners. We work hard to give our sponsors and partners excellent feedback for their investment; with our communications manager we have been working on social media to give the team an even better image, and the benefits are clear as we have increased our followers on social media by more than 120%. Maybe it’s partly due to Covid as people can’t go to the races, but we are also creating new videos, even more content and we have some exciting projects in the pipeline to develop our audience yet further.”

In common with their rivals the Monster Energy Kawasaki Racing Team is impatient to return to racing again after a long winter even if the team had raced successfully in Italy earlier this season.

“Winter was not easy; it was very, very long. But that doesn’t mean that we were sleeping; we were working and travelling a lot and spent many hours to organise everything to be able to travel. Our main goal all winter long was to focus on our riders, on their preparation, on their training, on their bikes, all to achieve the best possible results. Today the staff is more compact than in the past, but everyone is so motivated! We have the opportunity this year to have two riders who train together, who work together, who test together, who laugh together. I never saw this atmosphere previously, and for sure our riders help us to be so strong. Both Romain and Ivo are easy to work with, and as they train together it’s easier and better for the mechanics who can share time together. We knew Romain already last year; he’s a great rider and a great person, always positive. And we have seen Ivo improving a lot since he joined us and that give a strong motivation to the entire staff,” added Vincent, who is regularly in contact with Kawasaki in Japan and is fully aware what KHI expects for the team in the future. “Our strategy with Japan is to work as they do in Superbike, to have a similar image, let’s say even more professional. We are professional, but it’s difficult to compare Superbike and MXGP as everything depends on the budgets of course.”

Last season Infront offered a great exposure to teams and riders with eighteen rounds of the FIM MXGP World Championship all over Europe. It was a long and tough season for everyone, and 2021 could be similar.

“Last year was financially difficult for everyone, both the teams and Infront, the promoter of MXGP. The promoter did a great job to build a championship, and we see that it’s still very complicated to create a calendar. In common with every sport MXGP still faces a difficult time to rebuild from Covid and 2021 will be a strenuous time for teams, riders, mechanics and promoter as the series is compressed into a more limited time-scale but we will be strong together to maintain the high profile of our sport.”