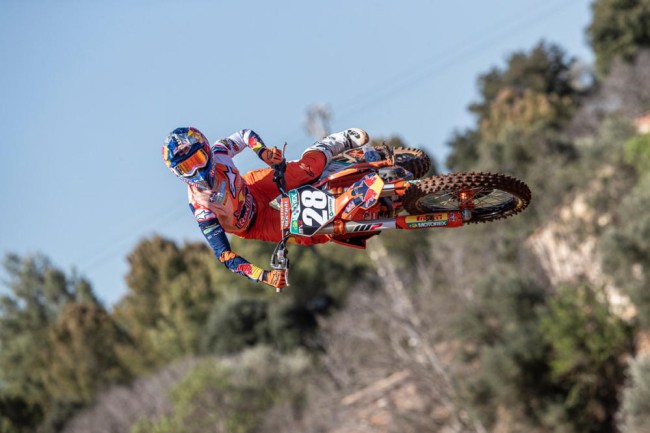 Tom Vialle: It’s hard to look past Tom Vialle in 2021. The young French rider is unbelievably good in every aspect of the sport at the highest level, he has the technical skills, he is a great starter and crucially for a title contender, he is very strong mentally under pressure. He is the closest thing to Jorge Prado coming through MX2 again and although defending a title is often harder than winning it the first time, Vialle’s mental strength should allow him to give himself the best possible chance of a repeat – and that would mean moving up to the MXGP class in 2022!

Jago Geerts: Jago Geerts has all the talent, skill and speed you need to be world champion but crashes last year and even at Ernee last weekend that has left Geerts nursing a knee injury, means there are still question marks at Jago’s ability to perform in high pressure moments. Of course the Belgian youngster is still young and has the time to learn but against a rider like Vialle he has to learn quickly to win the title this year and already going in carrying a knee injury means he is going in at a disadvantage. But Geerts is a magnificent talent and if he can sort the crashes out and get the starts with that man Vialle he has every chance of pushing the Frenchman all the way based on pure riding ability.

Maxime Renaux: The Kemea Yamaha rider is sometimes underrated but Renaux is very, very fast when he is on his A game. As he gains more experience and now possesses one of the best bikes on the gate, Renaux is starting to tick all the boxes he needs to be a title contender. Starts have sometimes hindered him in going with the front guys early but if he can get out of the gate consistently on the Kemea Yamaha and deal with the pressure and expectation of being a title contender now on his shoulders, he should be taken very seriously by his rivals. The Russian track should suit him too being so hard-pack and conequently Renaux could be one to watch in the first couple of rounds as he comes out swinging to assert himself as a title contender.

Roan Van de Moosdijk: The Dutch Jett Lawrence! Great technique and full of talent, Van de Moosdijk showed similar progression to Lawrence last year when both established themselves himself as potential race winners. The question now is can Roan step up like Jett has in 2021 and really make his mark in the world championship as a consistent threat at winning races. Everything is there for him to do it, the bike has improved and he has Marc de Reuver in his corner but that last step is often the biggest and hardest to accomplish but Van de Moosdijk has put himself in a great position for 2021 in terms of proving himself capable of being a front runner now he just has to execute on the consistency.

Matthys Boisrame: Like Van de Moosdijk, Boisrame has shown speed but he needs to limit the crashes if he wants to challenge for the title. He has his learning experience in the bank so now it’s time to go to the next level and challenge Vialle and Geerts on a regular basis but he can have a tendency to push the limit at times so find that balance could be crucial for 2021.

Jed Beaton: It’s his last year in MX2 and his final year to be world championship in this category, so Jed Beaton has to deliver in 2022. He was fast last year and consistent after some tough injury-riddled seasons, but now with a year of solid results and moments of race-winning pace, Beaton will hopefully show he can deliver that pace more regularly and of course get away at the front more regularly this season. If he does, you can’t count him out in 2022 and he certainly won’t be intimidated by anyone being the elder statesman in the class.