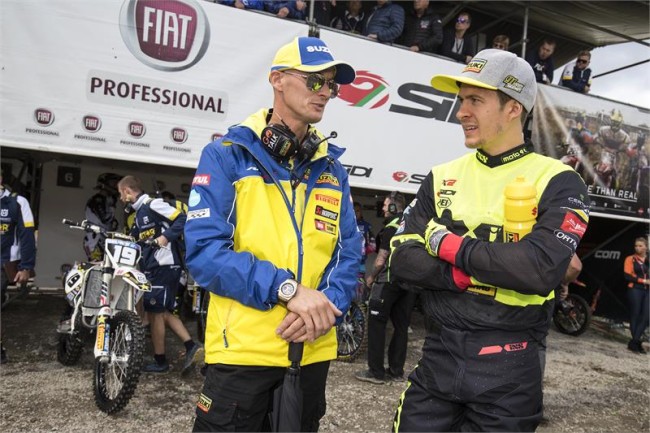 The Italian is now only one behind the current Suzuki team manager’s all conquering ten world championship title haul, after clinching his ninth world title at Assen.

We caught up with Stefan to get his take on Cairoli’s achievements and the fact the Italian is closing in on his world title record, as well as get Everts’ thoughts on Jeffrey Herlings’ winning streak and his MX2 Suzuki riders’ Hunter Lawrence and Jeremy Seewer.

As always the ten-time world champion was a privilege to chat too and very gracious with his thoughts on both Cairoli and Herlings, as you can read below.

First of all on Tony, he said in the press conference that you told him to stop now he has nine world titles! (Stefan laughs) What are your thoughts on his ninth world title and his chances of a tenth?

He is the deserved champion, he came back to his old level in the past after a couple of difficult years. It is nice to see him back and see him doing things like he did at Arco. Whatever happens, happens, he is quite close now at nine but if one guy can follow me and come next to me it is Tony. I have a lot of appreciation for him, I admire a lot what he does and for me he is a great ambassador for motocross. A lot of riders and kids can learn a lot from Tony, he is a big example.

What do you see that he does that gives him the edge on his competition?

To be there every weekend is something on so many different tracks. He is an intelligent rider, he knows when he needs to attack and he knows when he needs to take it easy, he is very smart in that. He takes his time doing a race and then one time you see him and bang, he goes for it. Not many can do that, that’s one of the good things he can do and why he is nine time world champion.

And just on Jeffrey, he won again today and won in America, he has really came on form…

For me I am not super surprised with that. For me when he struggled at the beginning of the year it was just a confidence thing it was not being able to ride a bike or a 450. He is fit enough so it was just putting his head straight and this is what he struggled with, as soon as he had that fixed then he started winning and that’s what he is doing now.

In the USA it surprised me the level of the US riders was quite low. It was only Musquin who could do something and the rest were a bit far off. Okay, Tomac was racing for the title but still, on that type of track he was a bit off. Last week in Jacksonville he rode better, the difference was not that big but still he was behind when Herlings had a decent start. But I am not surprised, I know what he (Herlings) can do on a motorcycle, and when everything is right it’s hard to beat him.

Do you think the level of MXGP will encourage more Americans to race it or will it discourage the top US guys to race MXGP?

I think the problem is we don’t have many rides here. All the team are full, we have a lot of good riders at the moment. For some riders here in Europe it might be interesting for them to go there!

Yeah for sure Herlings wants to win the title next year, if he can start the season like he is ending it, then it’s going to be a big battle out there and that good for the sport, it’s what the sport needs.

And that year in 1998, Tortelli won but it was probably one of the best world championship seasons, what are your memories of that?

Yeah that’s true, a lot of people speak about that season about how we were going at each other, doing some hard passing and having some big battles. Foxhill was one of the big highlights and it only brings more interest to the people if we have good racing and good championship battle. If it’s a boring championship people go and look for something else so it needs to be interesting. I hope we can see it next year, and I hope Gajser can be back on his game so he can also be in the ballpark to race for the championship again.

Just on Jeremy and Hunter, Jeremy had an okay first moto and a very strong second moto – keeping the title alive until the final round.

Yeah I think that was important we could extend it by one week. Basically it’s going to be tough to win it, Jonass will need some really, really bad luck to lose the championship, he has had a really strong year and he deserves to win the title. He won it fair and square by himself, but you never know what can happen. For me I know we are going to be second.

Hunter was very impressive last weekend, decent today, very good in the second moto, he seems to have picked it up towards the end of this season.

Hunter’s season has been a bit up and down but once he is back in his game he is good you know? He is a podium guy and last week he had a really good run there. This weekend he struggled, he didn’t have the magic, he was not fit, jetlag, he struggled with the track everything came a bit together but f he has some decent starts he is in there and he can pick it up. Some things take time but he is going to get there, he has a great attitude and he is a winner, I can see that.

On the MX2 class, there are rumours some manufacturers are pulling out next season but there are a lot of good young riders coming through EMX125 and EMX250, is it a worry there might not be enough rides to support these kids coming through for the next generation?

It is already happening. You see already some riders don’t have a bike for next year like Tixier and Paturel. There are some good riders who don’t have a ride. It is expensive to run a team the championship and from my point of view it is too long. 20 races is too much, also for the crew, the cost and all that it’s hard for everyone, very hard.