Herlings on his Assen MXGP win! 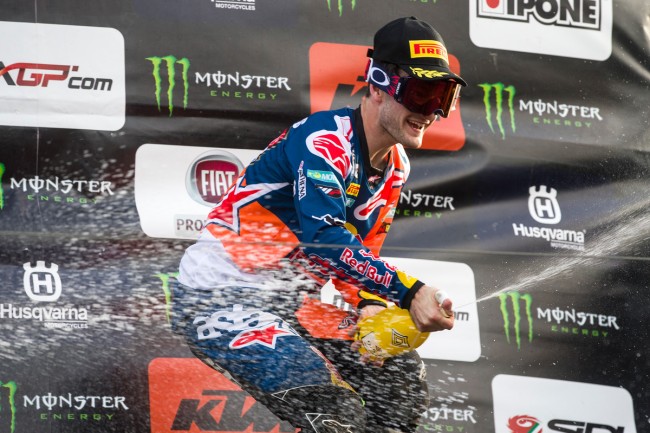 After a difficult start to the season, Jeffrey Herlings has been on fire recently.

A mechanical failure in Sweden potentially robbed Herlings of winning the last five GPs, but even so, winning five of the last six events (including the AMA National) is a pretty impressive feat for the young Dutchman.

The blisteringly fast and very determined Dutchman spoke to the media after and admitted he was lost at the beginning of the championship and also congratulated Cairoli on his world title admitting he was “the best guy” over the season.

Winning in front of his home crowd

First I want to say congratulations to Tony, he was the best guy for the season.

Today was actually really good. The first moto the first few turns were difficult, some guys  passed me but I came from sixth or seventh to second and then I start catching Tony and managed to overtake him and win that moto.

In the second one I got some wheel spin on the gate, I came around tenth and worked my way into the lead in a couple of laps, that was a good moto. I managed to win with a big gap and got my fifth overall win and my first home GP win in the big back.

On this track maybe 95% of the fans are on one side of the track so I just rolled the last few laps on the waves to say thank you to all the fans that came out to support not just me but all the riders. I really appreciate it and thanks to those guys, it’s been a good GP and I am very happy to get second in the championship. Obviously it’s good from where we came from in the first few races.

On the Dutch GP at Assen

There are obviously a lot of rumours going that next year will be another GP and the year after will be the Motocross of Nations. These are obviously just rumours that people have been telling me but it would be nice to get the Nations here that would be amazing, if that happens.

I really enjoy the track, it’s not that long like 1m 35 or 1m 40 or something but after all the rain on Friday and Saturday they really made the best out of it. I really enjoyed my time racing, not just because I won but because I felt it was a good track, a safe track. Sure next to the track you could land on the concrete, but for the rest I think the organisation did a very good job. I think there has been a positive turnout of people and I think if the numbers are right it will come back more times in the future.

Five overalls in six weeks – thinking what could have been?

Yeah I missed one overall when my bike broke but it’s a mechanical sport and things like that can happen. I just came too late, the beginning of the season I was struggling bad and fighting for fifteenth place and almost getting lapped. I didn’t know whether to go north, south, east or west anymore, I was completely lost. So we managed to come back from a very deep hole and come all the way back and close to or at the top right now.

The competition is very strong in this class. From the first place to tenth or fifteenth, they are all potential GP winners. Even though I got second and it means I am the first loser of the season, from where we came from I think we did a good job,  after four or five races I was like fifteenth in the championship, so to still come back to second is all we could have had.