Interview: Thomas Covington on Assen, his season so far and the MXDN! 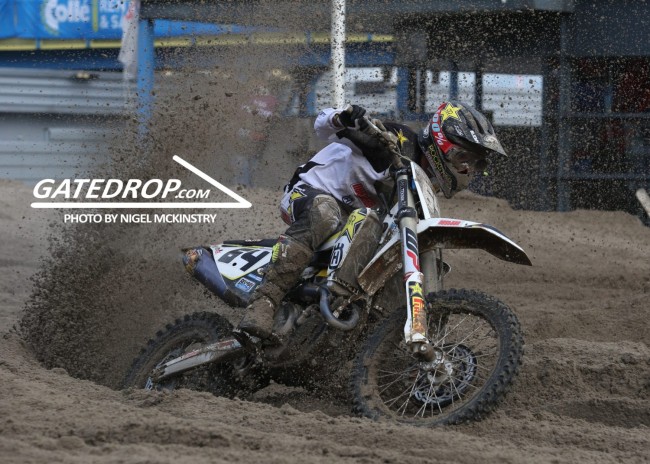 Since moving from America to compete in the World Championship, Thomas Covington has shown some good speed but before this year didn’t quite have the consistency. However, it has all clicked for Covington in 2017 as he’s pretty much at least a top five rider at any track now.

The progress the American has made is pleasing to see throughout the course of the year. The Rockstar Husqvarna rider sits fifth in the World Championship which shows just how much he has improved throughout the year.

He has impressed so much that he will represent America at the Motocross Des Nations in a few weeks time at Matterley Basin a track that he knows well. It will be a good way for Covington to end his season and he will be hoping to help America win the event again.

Heading into the 2018 season, Covington might just be the dark horse for the World Championship title next year with another good winter behind him.

We caught up with Covington after the MXGP of Assen to discuss a range of topics.

Gatedrop: Thomas, we are here at Assen. Can you just talk me through your day?

Thomas Covington: Yeah, it wasn’t the greatest day. It started off good with a third in the first moto. I was hoping for a little bit of better riding in the second one but I just had a little problem getting off the gate. I came through the pack pretty well, I think I was in eighth. A few guys were right there in front of me and I think I could have made the passes and got on the podium. I ended up going over the berm over there by the pit lane and went down. I could only keep it in thirteenth. Anyway, I got seventh overall on the day but I’m just bummed.

Gatedrop: The Assen circuit seems to get mixed reviews from the riders in the paddock. You always seem to have good speed here, what’s your thoughts on the track?

Thomas Covington: Yeah, I always seem to ride well here. I’m not too pumped on the track though actually. It’s a little bit weird, I mean it’s a cool venue and everything like that, it’s good for the fans. As far as riding goes on it, it’s not very good, especially this year after all that rain. The track was just really soft so it wasn’t good to race on but again it’s a nice facility, the paddock and the stands. Everything is really cool.

Gatedrop: Going back to last week at your home GP, can you just talk me through how that went for you?

Thomas Covington: Yeah, it was a good weekend. Especially on Saturday, I was fastest in practice and then won the qualifying race. On Sunday, Hampshire, just had a really good day. Obviously, I really wanted to win but he was just riding really well and I wasn’t able to break him in the second moto. But it was cool to be on the podium at my home GP, I’m really looking forward to the Motocross of Nations now.

Thomas Covington: For sure! It’s cool to see a lot of the fans also who have been following me all year with keeping up on the results and everything. It’s cool to meet all those people and the fans were awesome. They cheered me on all around the track. I got a lot of support from the American fans and it was cool to see.

Gatedrop: Saturday’s seem to go really well for you, you’ve got a few qualifying moto wins. What do you think you need to do to win an overall Grand Prix again?

Thomas Covington: Yeah, I’ve been struggling a bit with that. You know I’m just going to take it moto by moto and not really think about it too much because we are going in the right direction. I’ve been pretty consistent lately in the top three. I’m just going to keep doing what I’m doing and I think it’ll come.

Gatedrop: The first few years when you’ve competed in the World Championship you were a bit inconsistent. You were maybe third at a track that suited you and then twelfth a week later at a hard pack track. This year you’re more consistent so you must be happy with the progress you’ve made?

Thomas Covington: For sure. I mean I wanted a little bit more last year. Last year was a bit of a bummer you know. I had some injuries that I was dealing with. This year too I wanted more as I had some bad luck at the beginning of the season with the DNF’s.  But you know there’s always next year, I’m just going to really need to have a solid off season and make that next step.

Gatedrop: For next year, surely your goal is to become the World Champion?

Thomas Covington: Yeah for sure! It’s been a plan all along so I’m just going to do whatever it takes to be ready and go for it.

Gatedrop: It’s not too long until the Motocross Des Nations. When will you start riding the 450 and preparing for it?

Thomas Covington: I will start riding it in the next week to do a little bit of testing. I’ve already ridden it quite a bit in the US and I feel really good on the 450. I’m really looking forward to the Nations.

Gatedrop: How many years do you have left in the MX2 World Championship?

Thomas Covington: I can do two more years after this year.

Gatedrop: Have you thought about what you’re going to do after it? You’ll have to make the decision to move up to the MXGP class or go back to America!

Thomas Covington: I’m just going to take it year by year and we will see what opportunities I have and decide then. I do really enjoy racing the GP’s, it’s fun so we’ll see in the future what happens.