Interview: Roddy MacLeod – author of Will to Victory 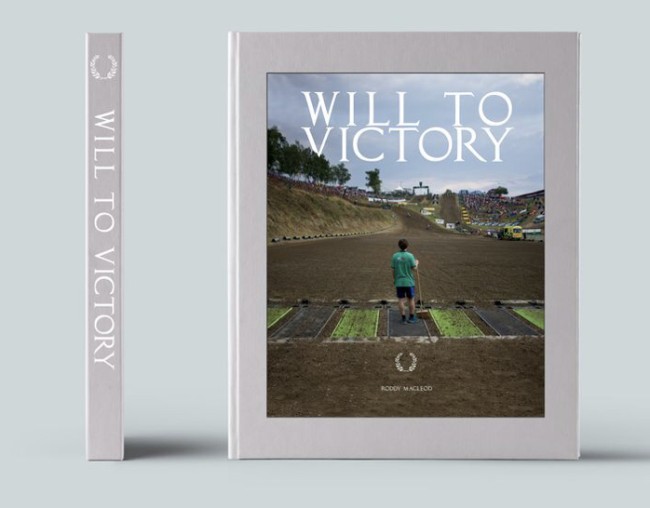 Canadian Roddy MacLeod has spent the 2018 season behind the lense at every GP event in order to put together a unique look at the 2018 world championship,Will to Victory.

We caught up with the former rider turned photographer to find out why he decided to create his own book and find out what a year of following MXGP is like when you have the pressure of your own unique project to create.

Just as a bit of background, how did you become a photographer and where did the idea come from to cover the world championship like this?

My dad was into photography when I was young so he always had cameras around. When I started racing motocross, he brought a camera to the track and I just started making photos. It was nothing serious then, I was taking pictures of my buddies and the pros.

In 2003 I moved to Germany for work and, being so close to the grand prix events, I wanted to go and watch. But once you’ve been a rider you don’t really want to watch from behind fences, so I thought, “I’ll get a media pass!” I borrowed a camera from my company’s marketing department and somehow convinced a Canadian magazine that I was a photographer. They supported my first credential and that’s how I got started.

During the mid ‘00’s I photographed the grand prix events and Bercy Supercross on a pretty regular basis, but it was only part time because I was still working a normal job. In 2017 I decided it was the right time to leave my industry and do something else. Photography has been a passion of mine and of course motocross is my sport, so it was natural to start there. The idea for a book was to show more than just action photos. There is so much happening at a grand prix and a book is probably the best way to present that kind of material.

Being in the trenches and seeing the racing first hand every week, what surprised you about the series and the riders?

I think one of the biggest and most impactful changes to the series has been the introduction of the Saturday qualifying race. In the past, with timed qualifying deciding the start positions for Sunday, the riders became very adept at one-lap fliers. The technique was to cruise around waiting for a clear track and then, when the time was right to gun it. You can still see this today in the timed practice sessions. But the short, 25-minute qualifying race has forced riders to be quick from the drop of the gate. This promotes intense, sprint-style racing and it has sharpened the entire grand prix paddock. They have learned how to quickly adapt to a new track and get up to speed.

The other major change is the 20-round series, which is extremely difficult. It is the longest series in the world today and, with so many gate drops and motos, the riders have had to sustain their competitiveness, physical and mental conditioning over a much longer period than in the past. There are pros and cons to this of course, but again, the overall sharpness of the grand prix riders could be seen at RedBud.

What was your goal each race weekend with your photos and observations?

I love motocross and grand prix especially, ever since I was a kid, so I just wanted to make the best photos I could to honour our sport. That means great action as well as insightful photos from the event. I worked to capture the context of the track and the people who make up our sport. By not working for anyone but me, I was able to be very free in this.

Did you have a favourite track or country you visited?

Favourite track was Loket. As a former rider, I much prefer the challenge of the traditional motocross track to the man made tracks. On the other hand, my laptop was stolen there, so not all my memories from the Czech Republic are positive!

You managed to get a really cool cover on Racer X with Jeffrey Herlings, along with a preview of your book, that must have been a very satisfying for you and a real shot in the arm for the MXGP championship, who don’t usually get many US magazine covers!

Yes, it was a pleasant surprise when Davey Coombs said they wanted to run a feature on the grand prix from my work this year. When they said I would get the cover too, I was really surprised. But Davey is also a fan of grand prix motocross and I think secretly he’d like to take a year off and just shoot the whole series too!

What was the most difficult thing about the doing the book, and what makes it so unique?

Yes, difficult is taking 40,000 photos that you really like and choosing which ones go into the book! That’s even harder maybe than it sounds. Plus tracking down former world champions and convincing them that spending a day with me interviewing and photographing them was not always easy. To be honest, I rather underestimated the amount of work to make a book, but it’s been worth it.

One other thing that was difficult for me was to see some of the changes with respect to the way fans are treated at the races. In the past everyone could get very close to the track and riders, really hanging over the low fences and cheering the riders on. The fans love this and so do the riders. Today the fans have been pushed back from the track and replaced with TV advertising. This is something I explore in the book in the photos and in the interviews with the former champions.

I think the book is unique for three reasons. One, it is self-funded so I could follow my own vision, photograph and say what I thought was right. Second, it is self-published because I wanted to produce something at a very high quality, more on the art side than commercial. If I worked with a publisher they probably would have made compromises, especially on the quality. Third, I photographed with Leica cameras, which if you are familiar with photography, means the photos themselves have a unique look.

Were you well received in the paddock, it seems you have got access to some big names of the sport!

I had some old friends in the media center so it was great to be back in that environment again. I worked closely with Calvin Vlaanderen at the Swiss grand prix and he could not have been more helpful. He really let me into his closest, most private moments over the weekend even though it was not a great result for him on the track. I’ve dedicated a large section in the book to Calvin and that tough weekend and I’m really proud of that work, it’s very emotional. But he was 100% professional and I really respect him for that. The former world champions I interviewed, once I got a chance to speak with them, were surprisingly helpful and open. The riders love their sport too and I believe they were happy to support the book.

As a former rider and a being photographer throughout the year, what are your thoughts on the two world champions this season, Jeffrey Herlings and Jorge Prado and their achievements over a 20 round championship? What makes them special?

Jorge Prado is one of those super talents that comes along once in a generation. His body position on the bike is always right and that is incredibly rare. Off the bike he is totally relaxed and easy going. It’s not an act, the kid really has it. I think what made him special this year was the consistency of his starts. The other teams urgently need to study what was happening in the first 5 meters of every race. Jorge was not always quickest in his reaction time, but after a few meters he already had a wheel on everybody. Whether that was simply a combination of his light weight and the strength of the KTM motor, or something else, the other teams need to figure it out. Otherwise it will be more of the same in 2019.

When it comes to Jeffrey, he has never lacked talent but he has lacked discipline. In 2018 he changed all that. He brought the perfect balance of preparation, intensity and maturity to the track and the results spoke for themselves. I would watch Jeffrey come out for free and timed practice and really just cruise around for 4-5 laps before getting up to speed, whereas everyone else was on it after one or two laps. As a rider, that takes patience. But a proper warm up and assessment of the track pays dividends. After finally warming up, Jeffrey was able to bring real intensity to his fast laps and he was often several seconds quicker than everyone else.

During the races Jeffrey again showed his maturity. Where in the past he would sometimes blitz the track from the beginning, this year he often settled in with the other riders if he didn’t get the start. Whether he was just allowing himself to get warmed up or he sat in to study the other riders, only Jeffrey knows. But again, after several laps he would raise his intensity level and then make everyone else look slow. The only rider that could almost match his pace was Cairoli, who himself raised his intensity to a new level this year.

At the end, it was Cairoli’s refusal to gift the championship to Herlings that made it such a special season. I imagine Jeffrey feels total elation having won the championship, but he owes part of that to Tony, who placed a high barrier in front of him. A barrier that only total dedication and focus could overcome, and that’s what Jeffrey did. Ricky Carmichael once said, “If you want to be the best, you have to beat the best” and for the rest of his career, Jeffrey can say he beat the best of his generation. He has the physical stature of Stefan Everts combined with the competitive ferociousness of Ricky Carmichael. It is a deadly combination and right now he is easily the fastest motocross rider in the world.

Will you be back to some races next year?!

You know, this year was completely out of pocket and I am glad I did it, but it’s not likely I can afford to do that again! Pre-orders of the book show it is already a success, but my ambition there was always to just break even. Having said that, hard work always brings new opportunities so I am looking forward to seeing what comes in the new year.