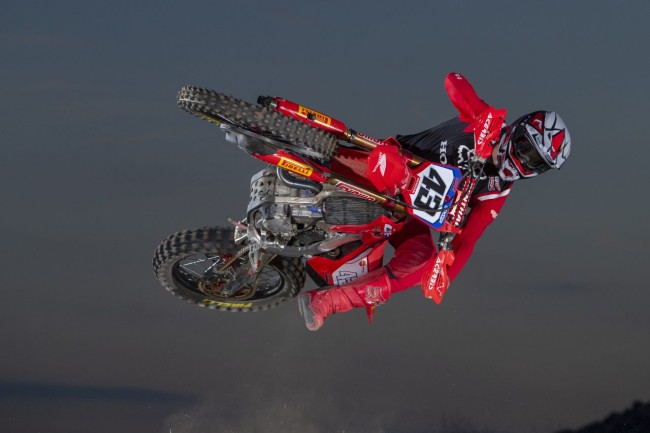 Over the last two season Mitch Evans has been a revelation in the world motocross championship. The Australian rode very well in MX2 to get his chance in MXGP on a factory Honda alongside Tim Gajser and , back on his favoured 450 machine, had the speed to run in the top ten all year and even the top five at times despite some injuries along the way.

Confident but also calm and realistic, Evans should only get better form here. This will be the first time in two years he hasn’t moved teams or learnt a new bike or series in the off-season, he knows what it takes and he believes he can be a contender. Gatedrop, along with other media, got to speak to Mitch about his season and aspirations for 2021.

2020 as a factory HRC Honda rider in MXGP

It was definitely a big learning curve, but I settled in really well straight away and I gelled with the bike straight away. The bike was a big step forward, right away I felt comfortable on it. I gelled with the team and the result came right away. I started off the season strong then unfortunately had the shoulder injury but it was a good transition to the 450 and my first time ever being in a factory team. it was pretty special and something I will remember for a long time

I learnt many things, they seem to be able to put in the same lap times all race long and that’s something that I really need to work on. Having Tim, I think I will be able to learn that a lot faster. The things I’ve learnt the most from Tim is more off the bike rather than so much on the bike, seeing how he interacts with the fans and even the team, Tim is such a great guy, a great personality and a real role model for younger riders, I try to learn as much as I can.

I’m a little bit disappointed at what could have been but at the same time I also believe that I had a great season. i believe personally that this season was better than last season. I enjoyed this season much more even though I had the injuries, I was so proud of myself that I was able to come back and start getting close to the front and challenging for podiums again. to me that’s most important, it was a bit of a bummer to end the season with another injury but I have comeback from an injury once before so there is no worry in my mind that I can’t do it again for 2021.

It probably wasn’t so much to do with the racing itself it was more just every day life. It was a big change, in Australia you drive 40 hours and it’s the same culture, same language, you drive 40 hours in Europe and you probably pass seven different languages! So yeah, that and the food and everything was a bit different but it was good to learn and good to experience it all- but it was definitely the day to day things that I struggled with. The racing came easily, that’s the best thing as racers and I had done two Nations before that so I had an idea of it works but I had not idea of the day to day life.

The difference from MX2 and adapting to MXGP

Yeah it was definitely a lot easier having Tim, when we did testing or whatnot I was able to see my lap times compared to him and I wasn’t far off but it was just about going those lap times every race. The thing that really shocked me the most racing the 450 guys was there is ten to fifteen guys who are right there every lap of the race. If you try to have one lap where you can have a little breather and drop a couple of seconds, someone is right on your tail ready to pass you and if one guys passes you there is someone else coming there is no time to rest! That was the biggest shock for me.

Going for the win

It unfortunate that I broke my wrist because I felt that weekend was going to be my weekend. I had the mentality that I was there to win and yeah, even if I didn’t win I felt I was going to be on for a podium that weekend so I really wanted to get a moto win before the year was out but unfortunately that didn’t happen so my aim is to get one as soon as possible in 2021, but I just have to be patient and my time will come.

I’m looking forward to 2021 and coming in healthy my goal is to stay healthy all season long and try to be as consistent as I can, get good starts and stay out of the barange as much as I can and just be there every weeekend. As long as i am racing every weekend and improving, and hopeully we get back to some sort of normality and having fans at the race because it wasn’t quite the same atmosphere this year so looking forward to having everyone back trackside.

I really like the one day events, that’s what I’m used to in Australia a small practice and qualifying and two motos. I much prefer it that way, i believe the two day events are a lot of riding and probably a bit too much to try and learnt he tracks, but at the end of the day i am not the one to make the decision whether we races two days or one day so however many days they do it, ill be there and trying to enjoy it as much as I can.