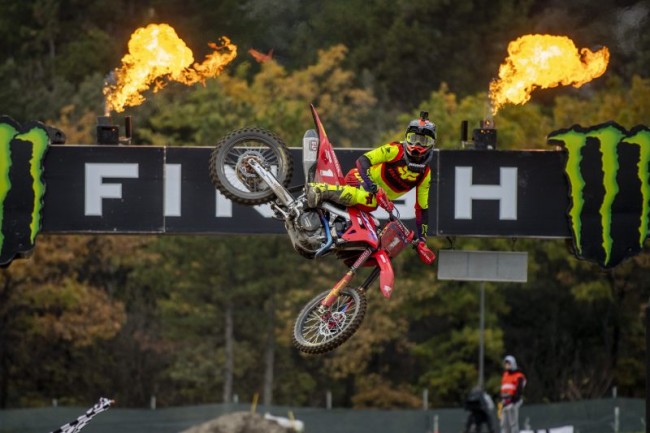 Tim Gajser spoke to the media, including Gatedrop, about a variety of topics following his fourth world title triumph. This is what he had to say bout his 2020 world title, the new bike, his overall season, and racing in the USA.

It was a such a big relief, the season has been weird I would say with all the things that has happened. The long break that we had during the season and then beginning again in August and having a lot of races in a row, we were racing on a Wednesday that never happened before. In the end we brought another title to HRC Honda, I’m super happy it was a good season for us. We managed to take a lot of race win, GP wins and in the end win the fourth world title. Overall it was a great season and I am very happy.. That’s what we work so hard for and all the hard work paid off.

Already last year at the end of the season when we started the preparation for this season immediately when I first sat on the bike I felt really good. Honda made a huge step forward with everything, they made it way lighter, more powerful, they improved everywhere. I really enjoyed riding it this year on the track. I was feeling at one with the bike, we improved some things we were struggling with in the past, especially riding in the sand even the starts were better this year.

Even if you win the titles it can always be better, I always search for the weak point to try to improve myself every year, that’s the goal. We got better in the sand and that was our goal for this year to improve the sand skills, we managed todo that but improving never ends. You have to improve every time, try to find you weak points and try to work on it.

Coming out firing in the first two GPs…

The beginning the first two GPs, were just great. I did a couple of mistakes, especially the first moto at Matterley Basin where I crashed out from dead last last then finished eighth, the second moto I had a better start and won the by 20 seconds. I saw all the hard work during the winter (paid off), we did a great job even with the new bike. We didn’t know what to expect in the first couple of GPs because the bike was new but immediately I felt really comfortable on it during the races.

Going to Valkenswaard again we had a great race. Saturday didn’t go the best, I didn’t finish the qualifying race and was on the complete outside for the starts. But I managed to take solid starts in top ten and managed to make quick passes in the beginning of both motos and fight with Jeffrey. I was really happy with the speed I had in the beginning of the season.

Recovering from a mid-season dip to control the championship

I would say the first couple of GPs when we came back from the break I was struggling a bit because many things were new. We were racing just one day, three times in one week so I needed a couple of GPs to adapt completely. I would say after the first GP win of the season that came in Mantova, after that win everything starts to click and I get my confidence back, start to put consistent motos, consistent starts in and from then on everything started to go in the right direction. The second half of the season I was feeling really good, riding really well, smooth, relaxed and the results were coming.

Set-up difference between Tim and Mitch on the Honda

I think the difference is like day and night, it’s a different bike. From the outside it doesn’t look so different. On the inside from the chassis, everything, Honda and HRC, they give you the chance that you can really modify the bike like you want. I have my set-up of the bike, Mitch, he has a completely different set-up because he is a different rider and his technique and everything is different to mine. With HRC you have a lot of options in how to set-up the bike.

Improving in the sand

Three of four years ago I never paid much attention to riding in the sand. We just had three or four GPs in the sand conditions per year and I didn’t pay a lot of attention, but now with the competition and so many good riders, you have to be really good everywhere on all kind of soils.

I was really working hard on how to set the bike up in the sand and even to change the technique on the bike for the sand tracks and yeah, it takes two years but I am really happy we did this hard work, putting in a lot effort to adjust the bike and to have a good position on the bike.

Next year will will be a new year again, everyone will start from zero, my motivation in really high trying to have a good winter and stay injury free, that is the most important thing and then to be ready for the races when we start in April.

Racing in the USA

I had a great time racing the Monster Cup twice. I would say a couple of years ago definitely my dreams were really big to go to the US, but now you know getting older, I am really happy where I am with HRC. I feel at home where I am. Of course to still maybe do some races is possible but to go there for a full season, I don’t think so.

Jorge is a great rider, he showed a lot of speed already in MX2 being back to back world champion.. Already this year he showed good speed so definitely with one more off-season and one more winter he is going to have a good preparation and of course he is going to be strong next year. But as everybody knows, MXGP is a really stacked class with so many good riders that are able to ride at the front, able to fight for the podium, race wins, GP wins and even the title. It’s definitely going to be an interesting season and I am really looking forward to it.