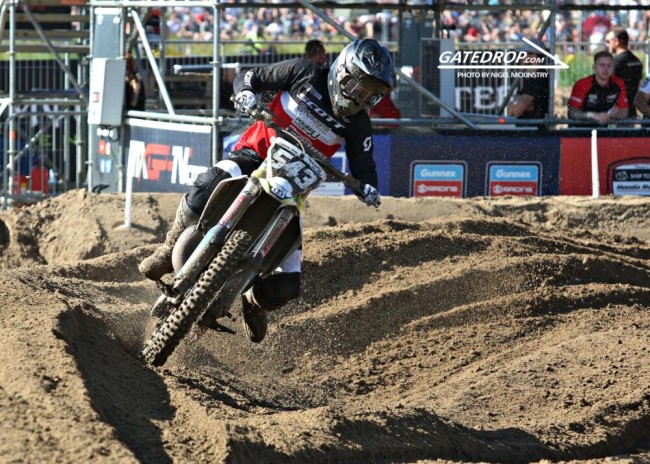 He might not have contested the entire EMX125 series this year but at the races he has contested, Laban Alm has showed really good pace. The young Swede just had his best round of the series so far in front of his home crowd at Uddevalla just missing out on the podium but he was able to experience leading at that high level for the very first time.

We caught up with Alm to discuss his season so far and plans for the 2023 season.

GateDrop: Laban, Sweden was only the third EMX125 race you’ve contested this year but it was a memorial weekend for you – can you talk me through your moto’s?

Alm: After a good timed practice I did have a good start position and I knew that I could do a good start, example in both Kegums and Lommel. I took the holeshot in race one, led for some laps and that was of course a great feeling in front of home crowd. I was so happy to finish third in the first race! Second race, I had a pretty good start in around sixth and had a good race finishing six. Overall I was fourth and just one point from the podium but I am very happy with a fourth overall.

GateDrop: To lead the first moto, in front of your home crowd and the first time for you to lead at this level, that must have felt amazing?

Alm: Yeah, of course, it felt amazing leading for the first time and in front of home crowd, it was just so amazing!

GateDrop: You’ve only raced three rounds of the EMX125 series, what’s the reason for that and why haven’t we seen you race more?

Alm: For the first round at Matterley Basin I wasn’t ready with my knee injury after a start crash in EMX at Teutschenthal the year before from October. After I missed the first round we just decided to ride the EMX125 races close to home.

GateDrop: You’ll also head to Finland to contest the last round, now you know you can run at the front you must be confident to end the EMX125 series on a high?

Alm: Yeah, I want to end the EMX125 season on top but I am just going to do my best and have fun, nothing else.

GateDrop: Coming from Sweden I thought you might have been better in the sand but Uddevalla was your best race yet – do you prefer hard pack or maybe it’s just a track you know well?

Alm: I like hard pack more than the sand but I ride good in sand also and I know Uddevalla quite good but I live five hours from it and don’t ride there often. I like the track and that’s why I did it good there maybe!

GateDrop: You raced Lommel but it didn’t go to plan for you although it must have been good for your experience? How did you find the track? It was unreal gnarly!

Alm: The speed and the starts were definitely there, just unlucky with the bike in both races. Second race was leading for a corner or two and was in third when some technical problems happened.

GateDrop: Do you plan on racing a full EMX125 championship in 2023?

GateDrop: Being a privateer, it must be tough to compete against the top riders who all have top teams behind them and great equipment?

Alm: I don’t think about that, now it is what it is and I just do my race.

GateDrop: The goal for the 2023 season might be to try and get on a team – have you had any interest yet and do you think you could secure a team?

Alm: Of course it would be nice to have a team in 2023 but no one has showed interest yet.