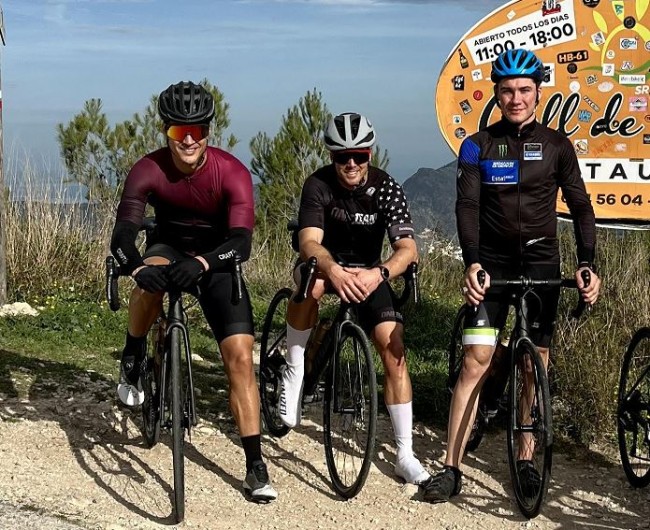 Glenn Coldenhoff has got together with Kenny Vandueren this off-season and the pair are now putting in the hard work for the 2022 MXGP season. Last year was Coldenhoff’s first year on the Factory Yamaha and even though he had some good GP’s it wasn’t the season he’d have wanted so he’ll be hoping that teaming up with Vandueren will have a positive impact.

We caught up with Vandueren to discuss how working with Coldenhoff is going so far.

GateDrop: You’ve started to work with Glenn Coldenhoff as a physical and rider coach. From looking at the outside this year how would you reflect on his season – he had some good moments but I think he’d have wanted more!

Vandueren: He can ride a bike but as we have all seen, he had some struggles through the season also technically on the bike he did not find the right setting. Glenn has always been training hard, he is more dedicated to the sport like anyone. So after the season he contacted me and I explained my method of monitoring, and we started analyzing putting the puzzle together and getting rid of his body weaknesses!

It’s really in depth. It’s also hard to explain, because you’ve got to prioritize the riding over everything else. So it’s really important to balance on and off the bike for every individual rider, there are so many aspects you have to take into account to get on the bike very fresh every time and sometimes less is more. Everything we do off the bike is to make you fitter and stronger on the motorcycle.

GateDrop: What has Glenn been like to work with so far during your short time working together and how have you been trying to help him? I guess when it’s someone as fast as Glenn it’s small percentages that can make the difference?

Vandueren: They had a shorter break in the off-season, We’ve changed it up a little bit for this year as we usually go through a base style training, which is longer and slower efforts. We have about a month less than we would typically have. I’m making similar efforts, but this time the intensity is much higher because we had to bump everything up a month sooner. First GP is just around the corner 20th February! But everyone had to do it, though. We are all just coming out of a month of basic endurance training in Spain Calpe where our main training was cycling. For now we’ve just prioritized the riding, and this week has been the first week back on the bike in Sardinia, because we are just coming off a three-block of solid training with a de-load recovery week before.

Our schedule will typically be a three-block of intensity and then one week of recovery, So this week we started the first block. I’m also taking into account that there will be 2 days of racing again this year! So it’s going to be a lot busier for the rider and more intense but I’ve just been writing the program with Yente, and Glenn does it with no hesitation.

Usually, you may get a guy who comes from a different training structure, and they’re older and set in their ways, and I thought he’d be more like that, but he hasn’t been like that at all. He’s just stepped up and done the work, which has been great.

GateDrop: I feel like it’s all about getting Glenn more comfortable on the Yamaha and once he’s fully comfortable then perhaps regular podiums are possible?

Vandueren: We all know that there is more to Glenn, when every puzzle falls into place then comes bike setup, testing, all of that. It’s a never-ending process, day in and day out, of trying to do things better and better. I see the old Glenn again before me as in the past years, I may have to adjust it after seeing where an individual rider in the season is but for now first the focus on building for better, step by step!