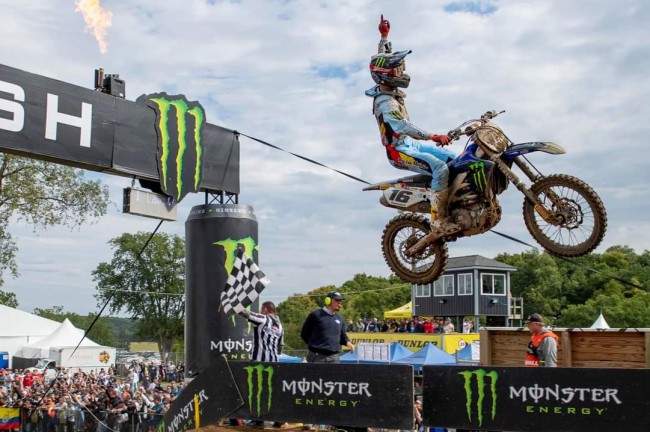 Jago Geerts was one of the biggest stories of the 2022 MXoN at Red Bud after he beat Eli Tomac to win the qualufying race on Saturday and then stayed right on Eli’s back wheel on the first moto on Sunday, posting the fast lap and beating third place by nearly a minute!

Geerts, on the back of a crushing world championship lose in Turkey, mentally moved on quickly and inmpressively to end his season not in disappointment but a memorable race for his 450 debut.

We caught up with Jago as he headed for his car and the Belgian talent was kind enough to stand int he rain to this interview!

Jago Geerts, a pretty amazing ride both yesterday and first moto today, you most be over the moon!

“I’m really happy about the weekend, it was really nice to win the qualifying heat but it’s not the same as the real motos. The first moto I took the holeshot but then slid out in the first corner and Tomac passed me but I could follow him the whole moto and had a good pace. I was catching him sometimes but I had some problems with the lappers so I lose a few seconds but I came back again but in the end it was second but I was pretty happy with that one.

Did it surprise you that when you did get held up by backmarkers you could catch him again?

I felt really good on the bike and really confident, so after a few laps I felt like I had the speed to comepte with him and that was really fun.

You rode at the Star facility for a week or so and you have made a lot of progress in a week!

Did you expect to be this fast so quickly within a week?

Yeah we did a lot of training there with Star Racing so it was a fun week for me, a different track and a different environment and really fun. We made some changes on the bike and the 450 just suits me really well.

Not really but after the practice yesterday I had good speed and was feelign good on the bike. The qualifying heat win was a little bit of a surprise but aftet that i felt for sure confident in the motos.

Just on your MX2 season, it obviously ended in heartbreak with Tom making the mistake and you crashing, how long did it take you to get over that because I wasn’t sure how it would affect your this weekend? It’s impressive to recover and be so fast!

Yeah, it only took me a few days because I had the goal for the Nations with Belgium. So after a few days I went on the 450 and that helped me get back in a postive way and just do my training, it was nice to end the season like this.

Your season overall, you didn’t win but were so close, you had an amazing amount of speed you seemed to be a level ahead of even last year. Did you do anything different coming into the season to be so strong?

Yeah I am really happy about the season. I changed a few things during the winter, changed my training programme a little bit but I also felt stronger on the bike and better, I don’t know how that happened. It was already during the last two races in 2021 that I felt better on the bike that before and yeah the season overall was really good, a lot of podiums just missed the title, that was a heartbreak but still just really happy about the season.

Next year obviously the goal is to be world championship and then the year after 450 so a lot to look forward too!

Yeah, next year the goal it finally get the title in the MX2 class after that just move on to the 450s, like we said the bike suit me well so I think it will be fine in the future.