Interview: Cole McCullough – gearing up for his EMX125 debut 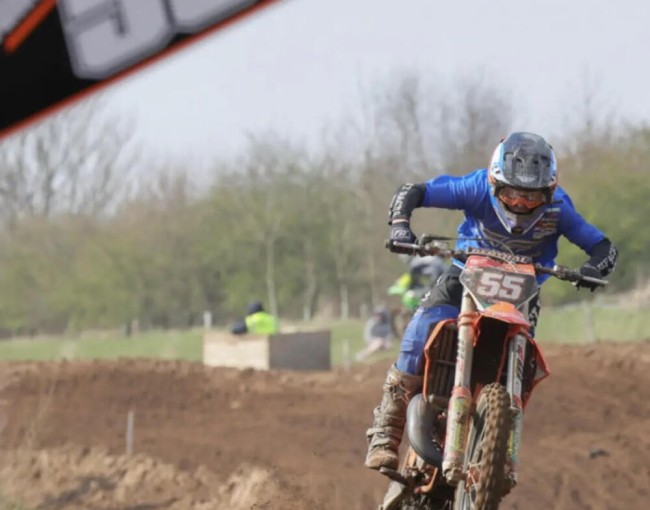 Cole McCullough is gearing up for the biggest race weekend of his career so far as he makes his EMX125 debut this weekend with the Hitachi KTM fuelled by Milwaukee. The young Irish talent will race the slick Italian track at Arco di Trento and it’s exciting to see a young Irish rider in the Grand Prix paddock.

We caught up with McCullough ahead of his EMX125 debut this weekend.

GateDrop: Cole, you will make your EMX125 debut this weekend, how do you feel heading into the weekend of the biggest race of your career so far?

McCullough: If I said I wasn’t nervous I would be telling a lie, but like every other race I have lined up at, every box in my preparation for it has been ticked. My fitness is very good, my bikes are very good and my riding has been very good. I have some of the best people possible around me making sure everything is done how it should be.

GateDrop: Have you watched much of the EMX125 series in the past – do you know much about the series and what do you like about it?

McCullough: I watched and followed the series very closely last year. Mainly because Bobby Bruce was competing in it and also, towards the end of the summer, Roger Magee had spoke to my dad about my plans and the possibility of me joining his Hitachi KTM fuelled by Milwaukee team in 2022. The EMX125 series is really the first real stepping stone to riding at GP level and that has always been my goal.

GateDrop: I love the EMX championships because it’s a chance for young kids to ride at the same event as the best in the world that race MXGP and you get to ride rough tracks… this series should really help bring you on?

McCullough: Yeah, it will be a tough championship for sure, a lot of previous EMX winners have went on to win GP’s and even became World Champions so it really is the place to be if you want to progress to the highest level. The tracks get super rough and rutted but it’s the same for everyone.

GateDrop: What’s your goal for your EMX125 debut and then for the rest of the season?

McCullough: My first goal is to qualify for the main race, I know in previous years the Italian round has always been stacked with a lot of young fast local riders who only do their home round. If I get past the qualifying stage I will aim for two solid race finishes in the races.

GateDrop: The Hitachi KTM team have a lot of experience so having them behind you should be a big help?

McCullough: Yeah, for sure, everyone in the team has been in the GP paddock for a long time and I’ve got to know them all pretty good when staying at their workshop in Belgium recently. It really is a team effort, everyone is very willing and eager to help in whatever way they can.

GateDrop: You are working closely with Stephen Sword who knows what it takes to run at the front of the GP’s – what’s he been like to work with so far and how does he help?

McCullough: Stephen has been a great help and influence on me in the short time we have worked together. His knowledge and experience is second to none, to have him in my corner has been key to my progress since I moved up to the 125cc machine. Having him give me advice and instructions at my race weekends has certainly gave me the confidence and speed that has helped me to my results so far this year.

GateDrop: You will be racing Arco this weekend – what’s your thoughts on the track? There’s a number of changes for the track this weekend and I believe it’s running in the opposite direction so all the riders will have to learn the track again which could help you!

McCullough: Yeah, the track is now running the opposite direction which could be an advantage for me as it will be new to everyone. It is a pretty spectacular circuit and no doubt it will cut up rough and gnarly throughout the weekend, conditions that only a GP track gets in so it will be a totally new experience for me.

GateDrop: Going to race in Italy and be part of the GP paddock is very exciting and a big opportunity – you must be excited to go racing outside the UK?

McCullough: I’ve had a couple big races outside the UK last year and they were really to help prepare me for what was to come. Being part of the GP paddock is obviously something I haven’t experienced yet so it is exciting and a great opportunity for me to be part of it.

GateDrop: Just on the start of your season, I know you didn’t have a full off-season due to injury but have you been happy with your start in the British Championship and MX Nationals series?

McCullough: My season has started pretty good, I had a shoulder injury which kept me off the bike for almost six weeks after Christmas and I missed the opening EMX125 round at Matterley Basin. Since then I spent a week in Spain prior to the opening rounds of the British and MX Nationals championships.
I was pleased with results getting fourth overall at Culham, then a podium at Fatcats the following week witha third place overall.

I just arrived back from Europe last Thursday after another eight days out there riding which has helped me prepare for this weekend. I’d like to thank my mechanic Davy Dickson for the commitment he puts in, he got back home last Thursday and then spent four days preparing my race bikes and spare engines before setting off for Italy yesterday (Tuesday). The next few weeks we will be spending out in Europe, after the EMX125 round in Italy I will be racing the Dutch Masters the following weekend, then it’s off to Latvia for another EMX round.

Thanks to Roger Magee and his team and everyone involved with me for their support. I really am ‘living the dream’.