Interview: Alexander Brown on his opportunity with Hitachi KTM fuelled by Milwaukee 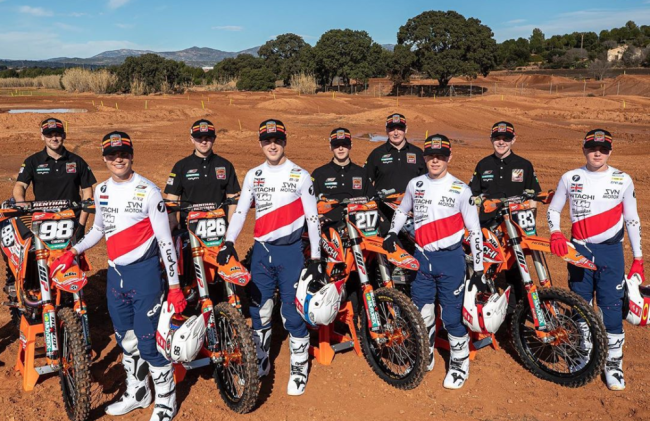 Despite being forced to stop racing professionally, Alexander Brown has landed a job with the Hitachi KTM fuelled by Milwaukee team and is a regular face in the GP paddock. Brown was drafted into the team last year after an injury to Conrad Mewse but then unfortunately picked up the serious injury which means he’s no longer behind the start gate.

However, having the opportunity with the Hitachi KTM fuelled by Milwaukee team means he can still be involved in the sport he clearly loves so much.

In part two of our interview with the Scot we discuss his opportunity with the team, if you missed part one, you can read it here.

Gatedrop: Last year you had the opportunity you’d been waiting for your entire career – a World Championship ride with Hitachi KTM fuelled by Milwaukee. How did it all come around and you must have been buzzing to get the opportunity?

Brown: Yeah (laughs) it was a strange one. I was actually living in Stansted with Ben Clark but got a phone call from BC (Bryan Connolly) asking if I’d like to ride in a weeks time in Portugal, straight away I said yes then after a stressful few days picking kit up and things. But man what an opportunity it was and it will live with me forever.

Gatedrop: You rode I think two GP’s with the team before the injury, can you talk me through those races and how it felt to race MX2 and what was the level like?

Brown: The races were unreal to be honest just starting next to everyone. Race two at Portugal was the best for me, I got a decent start worked my way up to the top 15-16 then eventually fell back to 20th just with the heat and the intensity. The level was crazy it’s like 20 guys that could be chasing a podium that weekend it’s just crazy.

Gatedrop: What would you say is the hardest thing about being a young rider trying to make it in the Motocross world?

Brown: The hardest thing for a kid is to stay focused for sure. It was never a problem for me as my mindset was always to win and race – nothing in life mattered to me apart from racing. I see so many young kids with talent that hit the ages of 17-18 then they start going out partying and it’s a shame once the hard work starts a lot of people don’t enjoy it but what I loved most was the hard work and pain. So my advice to kids are work hard and dreams can become reality. The only reason I made my dreams true was because of sacrifice, hard work and the amazing people I had around me. And I feel that’s the three things you need to make it.

Gatedrop: You are still in the GP paddock as you’ve got a job with the Hitachi KTM fuelled by Milwaukee team – what’s your role and have you enjoyed being at the first two GP’s with the team?

Brown: Yeah, I’m still in the GP paddock. It’s nice but also very tough mentally to watch it as I should be out there riding. I’m practice mechanic for Bas Vaessen then just help the team on the weekends. Being at the GP’s with the team are good for sure but I’d much rather be racing for them. It’s nice to see everyone that helped me in my racing career.

I’d just like to thank everyone that helped me throughout my career it was a blast for the few years I got Apico, Putoline, Dyce carriers, Bob Buchanan aka Oakley riders Uk, Bryan Mackenzie, BC, Talon, Drysdales motorcycles, FTR Suspension, Leatt, Forma. And all the other people that helped earlier in my career thank you!