Interview: Dylan Walsh – impressing on a 450! 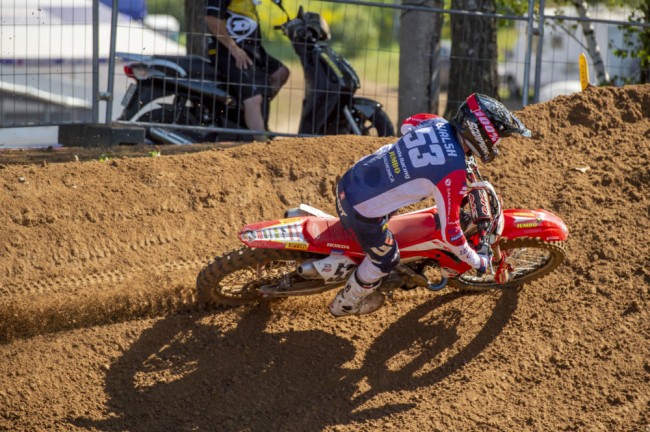 It was been a hectic few months for Dylan Walsh who has spent time all over the world chasing a ride for 2020!

The Kiwi has been back in New Zealand, then over in the States before coming back to the UK racing for the MSR Redline Honda powered by REVO team and is now also racing MXGP as a fill-in rider for Jacky Martens’ Honda squad!

We caught up with the fast and aggressive-riding Walsh, who has been the talk of UK motocross for the last month after his performances on the 450 Honda.

Dylan, I remember seeing you at Assen with Elliot Spencer and you were in good spirits but in the race you got injured and went home with no ride then ended up in in America. Can you take us through from after Des Nations and how you ended up back in the UK and MXGP with Honda?

The Nations was going good and then I ended up dislocating my shoulder . After the Nations I was speaking to a team and trying to finalize a contract and then I went to America on holiday for a couple of weeks and the day before I was meant to fly back to Europe the deal fell through.

I realised there was nothing there for me in the world championship so I flew to Amsterdam, packed my bags and the next day flew back to New Zealand! It was a big ole trip. I didn’t have anything (in NZ), so I called Josh Coppins and got a bike from him and tried to work out a way to race in New Zealand over the summer and we ended up working something out between Ben Townley and Coppins which was nice. I also then did a deal to ride for the factory 250 Yamaha team in Australia for the year but with Covid the series wasn’t looking to promising and my contract had to be changed, so we came to an agreement and we both parted ways.

So the next day I booked a flight to America! I called up my good friend from Seven, Roger, so I went to California and got a bike from Aaron Nixon at Monster and did a bit of riding and was calling the teams to try and get a fill-in for the summer and not a whole lot came about. But I got a chance to ride with Pro Circuit and it was all going well then until some things didn’t match up or work out.

It wasn’t anything I did wrong. Mitch was super happy with my riding but it just didn’t work out, so Revo called me and said I could come race the British for them and Matt Smith racing.

So I jumped on another plane the next day to the UK, had two days on the bike, raced Hawkstone on a stock Honda 450 and it went not too bad – it should have been a win.

Then the Wednesday after Jacky called me. The next day I drove from England to Lommel to test the bike and to get everything sorted then I flew to Latvia.

Training-wise how has that been with all the changes and travelling?

I have been training non-stop to be honest so I am not behind on that.

I had heard at Hawkstone your raw speed was impressive, then in Latvia you got good starts but that class is pretty stacked with maybe over 20 GP winners, how did you find that intensity?

That’s the thing, I ripped two good starts and just tried to send it with the front group but I rode the 450 like a 250! The intensity was so high I burnt myself out early both motos but it was a good learning experience. It wasn’t my favourite track also but I’m looking forward to Italy.

Jacky Martens is an ex-world champion himself, and has ran teams for a long time and seems good with young riders, how have you found him so far in your short time racing for him?

So far it has been awesome, I have loved it. With the suspension he has been super helpful and I feel like we are in a good way. We have been making massive improvements so I think the next few races we will keep building and we will end up being able to show something good.

You have went from not having a ride to a GP ride and a ride in the UK, overall you must be really happy and motivated to prove yourself to keep your career going over here.

I am super grateful for the opportunities from Revo, Matt Smith racing and Jacky. I just want to try my hardest and give them a good result.

Your last race was at Landrake, it was pretty rutty and some of you guys were finding the smoother lines how was that weekend for you?

It was a wicked weekend. I almost missed the start in the first race due to water in my kill switch. I rolled into the start gate as the board came out and pulled the holeshot and led the first 15 minutes then my throttle was sticking so I pulled in but I should have won that race.

The second moto I got a different bike which I hadn’t rode before. I wasn’t used to it on the start so I didn’t get the best of starts but I came through from quite far back to I think fourth then stalled it, went back to eighth then came back to second which I was quite happy with.

How are you finding moving between the two teams, has that been easy enough for you?

It’s been really good because they all speak and Jacky let me bring my training bike over to England, so it worked out well.

Faenza is your next race, a triple header on a hard pack old-school circuit are you look forward to that? Are you good in that sort of going?

Yeah I’m pumped really, I think that’s my sort of ground and it should work out good I think for me.

On the level of the class in MXGP, was it what you were expecting and do you feel you are coming in more prepared now and ready to go?

I think the level, I expected it to be really high, it’s what I expected but it was still a reality shock. First to 20th I think have all podiumed you know?!