Hunter Lawrence on his win: It was a cool moment 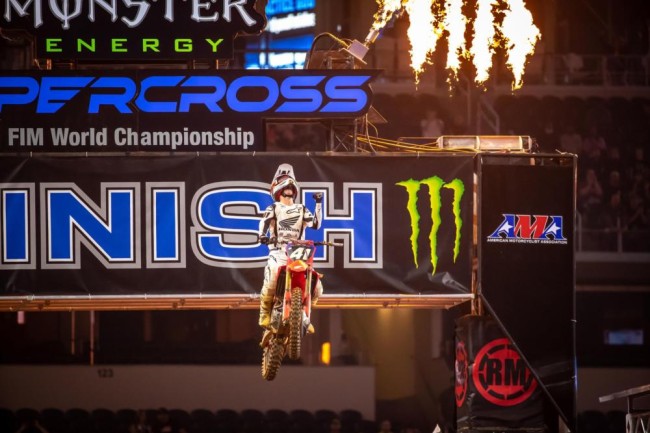 It has been long, painful and frustrating road for Hunter Lawrence in the USA with his body letting him down and being unable to show his full potential in the US. Now though things are turning around for the popular eldest Lawrence brother.

Hunter rode a perfect race at Arlington 2 to take his first ever supercross win and vault himself right into the points battle with McAdoo and Cooper for the title. Lawrence spoke to the media via zoom to discuss his win and being in Jett’s shadow for the first time in his life due to injury.

Emotions during the race

At the start I think was fifth or something around the first turn and the just tried to push and shove my way through to the front as best as I could. I was sitting third for a little bit and those boys in the opening laps, everyone can run a pretty close speed when they are all fresh and stuff, I was just sitting there and trying to make passes when I could. Then I seen an opportunity and went for it and made the two for one pass before the finish line.

Then it was easier because you have a clear track and you can manage the race. I think that is a lot easier rather than coming through the pack and grinding and battling the whole moto. I just kept telling myself, ‘one lap to go, one more lap, one more lap.’ Then the white flag, ‘right two more laps, pretend you’ve got two more to go.’

The last corner I was like, ‘ yes we did it!’ Then it all just came out on the finish line, everything flashed through my head of everything thing I have been through in the last two years. It was a cool moment that I will carry with me for the rest of my life for sure.

Racing Jett at the shootout

I think it has to depend on the scenario. Who knows where I will be in championship at that time, I think Jett’s quite a few points back with only one or two rounds left. It would definitely be fun for sure, it’s obviously people are wanting to see when we are both 100%.

Lucas asked us the other day and I said I would clean his clock for a main event win in the last turn and he said the same thing! If it’s coming down to the wire you can expect one of us to send it up the inside and saw off someone’s front end – maybe a little more so than if it was any other riders! Just because we could probably fight out there and it doesn’t seem the same just because we are brothers we do it at home all the time!

On helping each other

It was difficult when I was really struggling with myself and injuries in my body and not doing well, not doing what I believed I could do. He was obviously doing really well and started holding the bar up and holding his side of the deal up for the Lawrence brothers.

My whole life I was kind of the one that was, I signed with a different team and Jett would come as my little brother as the package kind of deal because he was good as well. So it was tough, really tough, especially when it’s your brother (winning). Obviously I am happy for him and only want to see him do well and stuff but at the same time you still have that competitor mindset, you just want to be doing it because you believe in yourself and you believe you can do those things.

Jettson has been flying the flag for the Lawrence’s the past year and stuff so I am stoked to be able to just get back to 100% and getting started like this is awesome. It’s where I know I can be and where I should be and I’m stoked on that and so is he because he knows everything I’ve gone through, just everything, it’s my whole life you know?