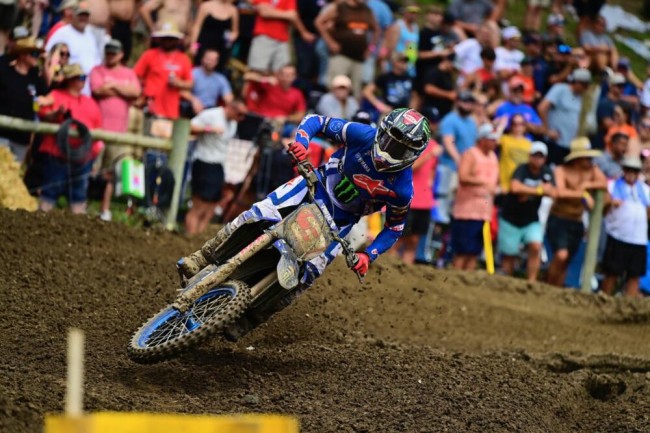 Eli Tomac is loving the intense title fight with Chase Sexton hat will go to the last round this weekend at Pala with Tomac leading by one point heading into what will likely be his last ever AMA pro National!

The engaging and relaxed Tomac said in the press conference: “Once again, we flip flop our motos here. Moto one, had to make passes early, too. Got to the lead fairly quick, knew Chase was there, I saw his pit board the whole time, so I knew he was going to be on me. Yeah, we were running away once again. Once he got around me, at this point it was all or nothing. I was able to make that line work in that sweeper past the mechanics.

“Moto one, it was a great thing for me. Moto two, we both got better starts, he obviously got the better one, but I did what I could. Got closer there in the middle of the race and made one mistake in the middle of the race. I was pushing really hard at that point and just cross rutted over a little single. I lost a lot of time. It was a big mistake. I honestly thought I was going to tip over and crash there. That was it, basically lost touch there and stayed where I was at that point.

“For me, honestly it’s been one of the most exciting seasons I have had as a racer and a rider. I have enjoyed it as a racer in this point of my career. I’m loving the challenge, neither of us want to give an inch, I have had a lot of un doing it and glad I can take it to the last round like this.”