Cairoli explains his big whip at Hangtown while leading! 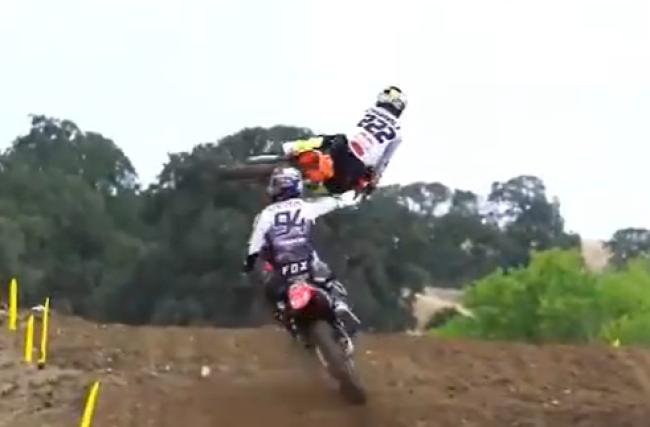 Antonio Cairoli gave a hilarious explanation for the cool whip after his holeshot at Hangtown – because he wanted it for blown up picture with Ken Roczen in the background!

Donn Maeda of Swapmoto said: “@antoniocairoli told me that he threw a fat whip after grabbing the holeshot in the second moto, because he knew @kenroczen94 was close by and he was hoping to get a cool photo to blow up for his house back home. 😂” Cairoli then replied saying, “doing it for the gram.”

Is there a cooler champ in the sport than TC?!

Cairoli, who will now race rounds three and four of the US Nationals, finished as top KTM at Hangtown in sixth overall said of his day: “We improved a little bit from last week, so I’m pretty happy with the result. We still need to work a little bit on the speed in the first laps of the race. The first three-to-four laps, I cannot really get in the rhythm. After 10 minutes of the moto, I feel like I can stay there. I feel that we improve every week, and we try to improve the bike also. We got some testing in last week, and this coming week we’re going to do some more testing. Hopefully we can improve another little bit before the next race.”

Get more comments from Cairoli at 18 minutes in below:

Jonathan McCready and Andy McKinstry discuss the drama in France off and on the track plus round two of the AMA series at Hangtown. Get it on iTunes here or Spotify below: